A weak muddy stream meanders through the maze of shacks along a path etched in the soil after years of erosion. Its source, a tap perched on an uneven concrete slab, is hidden by a group of women with buckets.

"We don't have electricity or water. There is only the one tap," says Shumikazi Funda, who shares a shack with two siblings and her four children in Mandela Village in Katlehong – a township near Germiston on the East Rand.

This informal settlement is one of the countless places around the world named after the global icon Nelson Mandela, who this week turned 95 in Mediclinic's Heart Hospital in Pretoria after being admitted at the beginning of June.

In some of these places Mandela's legacy lives on in name alone.

In Mandela Village in Hammanskraal, north of Pretoria, a full-size statue of Madiba stands tall and proud in the square. "Free at last" reads the plaque.

But back in Katlehong a little girl wearing a light-grey doek and pink top jumps from one side of the muddy stream to the other and back again. She follows the stream while running to meet her friends playing beside what the residents call "the dam" about 50m from the tap.

The "dam" is actually a massive crater filled with water and rubbish. It was left behind by a mine that once operated here.

A rubble removal truck shrugs its load over the side of the crater next to a row of portable toilets that add to the overwhelming stink. Men in mismatched overalls and dust masks haul the rubbish over the side of the truck as residents rush to see whether there is anything valuable.

"Our children just pick up this rubbish," says Funda. "They can eat it at any time."

Bongi Mpupu, who runs a nongovernmental organisation in Katlehong, says many children get diarrhoea after playing in the trash.

"If they see candy they eat it and get runny stomachs." 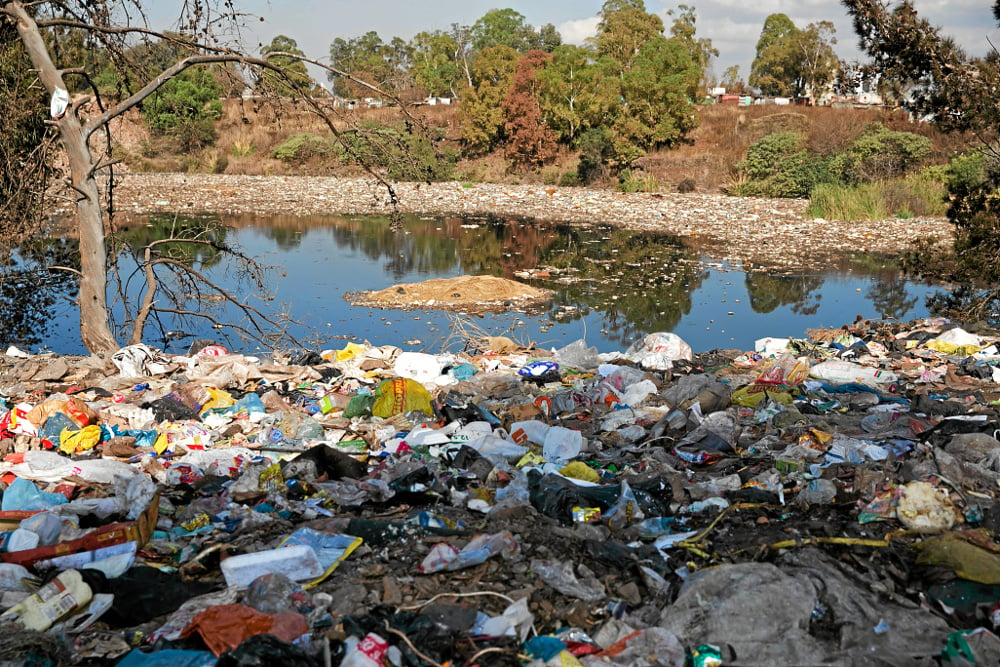 Water and sanitation for all
In his State of the Nation address in 1994, Mandela committed to ensuring "the provision of clean water … for all and the introduction of proper sanitation".

In 1996, less than 20% of families had no access to running water. The situation gradually improved and the latest census results showed that 8.8% of households lacked water.

But, 19 years after the former statesman announced his goal, almost 10% of South Africa's families are still denied the benefit of clean water and 5% have never had the luxury of even a bucket toilet at home.

"Here in Mandela Village in Mamelodi we don't have lights, we don't have toilets and water is also a problem," says Joseph Masemola, staring disdainfully at a group of containers 20m from his front door.

They look as if they once belonged to a large truck. Now rusted and lopsided, they are nyaope drug dens.

"I doubt the people here realise that they live in a place named after such a great person. Mandela is still alive but things are bad. If he dies it will get worse."

"This announcement, in a sense, pushed the second health reform – which was the roll-out of clinics," says Ayanda Ntsaluba, who was the health deputy director general for policy and planning at the time.

"By the end of his term there were close to 500 new clinics built."

But there have been unforeseen challenges.

Funda lives 15 minutes away from the local clinic but she has to leave her house five hours before it opens.

"If you are sick you might even die there because you wait for a long time in the queue because it moves slowly. We get there early but it only opens at 9am," she says.

Melitha Mokoena and her family live in a settlement across the road from the Stanza Bopape Community Health Centre in Mandela Village in Mamelodi East, near Pretoria.

"The service there is very poor. Last week I took my child to the clinic with a high temperature at noon and waited for an hour. There were only two of us in the waiting room. When we eventually got in the nurses were watching a wedding DVD."

She shares a yard with her neighbour, whose shack is right outside her door.

"This isn't life. We have gravel roads and there isn't space to build new toilets when the old ones are full," she says. "But Mandela has done many things for us. He feeds our children with feeding schemes at schools."

Food for children
Mandela introduced a programme to provide primary schoolchildren with food. According to the government, 4.9-million children were fed between 1994 and 1997. But, last year, children in 17% of families often went hungry, according to the Children's Institute at the University of Cape Town.

"I have to go into debt to buy food, because no one in my house works," says Funda. Her sister and two adult sons live with her. "This is the life we lead."

Mandela Village in Hammanskraal is as far removed from the piled-up shacks of Mamelodi and Katlehong as its geographical location.

The roads are tarred and free of potholes and litter. There is a long row of beautifully built structures including a police station, a library and a skills development centre.

Rosinah Maphoroma, a teacher at the local Catholic school, believes being named after Mandela has helped to bring about development.

"For most of us this place is like town because we have lights and all these things. I think Mr Mandela would be very happy with this place."

But for Funda, who has lived in Kathlehong's Mandela Village for more than 20 years, life is static.

"You can't walk the streets in the morning, you are not safe. Even to just go to the train station. But we are still here. What can we do?"