Threats to peace in shackland 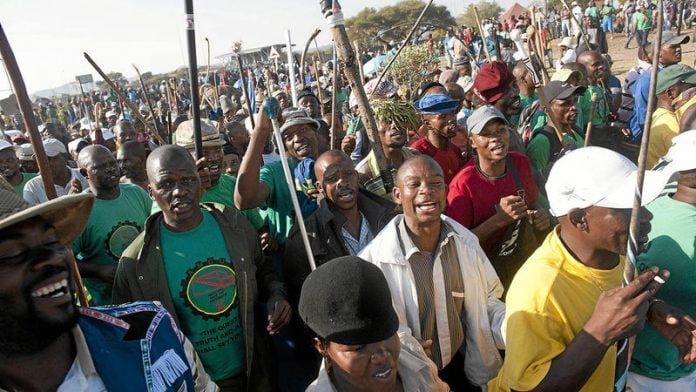 For most of those involved in last year’s strikes, the perceived militancy of workers in the mining sector, particularly in the platinum belt, is a result of broken promises more than the squalor of their immediate environment.

George Tyobeka, an Association of Mineworkers and Construction Union (Amcu) shop steward at Amplats, told the Mail & Guardian that “right now we have several comrades behind bars [from last year’s strike], so we can’t sign a peace deal because there is no peace.”

He was referring to the framework agreement for a sustainable mining industry brokered by Deputy President Kgalema Motlanthe among organised labour, organised business and the government.

Workers in the platinum belt do not consider themselves militant, even though the songs they sing at gatherings can be interpreted as such.

During a two-day stoppage in mid-May, workers clad in Amcu and National Council of Trade Unions T-shirts unveiled a new clutch of songs as they waited for Amcu president Joseph Mathunjwa to address them.

The chorus-based songs spoke of how “workers would rather go home than stand for the abuse of other men their own age”, about how “those” [referring to Gwede Mantashe] who spread lies about them would pay for it and, ominously, of looking towards the mountain, as something was “about to happen”.

A "union-related hit"
A few days before, on May 11, Amcu regional organiser Mawethu Steven was murdered in a Photsaneng tavern near Marikana.

The killing, which Amcu members believe to be a union-related hit emanating from the ranks of the National Union of Mineworkers (NUM), was followed on the same day by the killing of twins Ayanda and Andile Menzi in Nkanini, the informal settlement outside Lonmin’s Western Platinum operation.

On the morning of May 13, Lungani Mabutyana, a rock drill operator at Rowland Shaft, was discovered hanging from a tree at “small koppie”.

His brother, Thabani Mabutyana, also a Lonmin employee, said his younger sibling had been experiencing financial problems with the loan sharks that dot Marikana’s main strip.

On May 15, a solemn Tholakele Dlunga, an Amcu shop steward, told me from the passenger seat of a car outside Wonderkop Stadium that he had escaped death when he was tipped off by his neighbours that strangers were looking for him. He promptly moved house.

He spoke of the existence of a hit squad and the widespread sentiment that the violence has descended into a tit-for-tat game.

"Kill or be killed"
“They want to weaken the organisation,” he said of Steven’s murder.

“With the way things are, it’s going to end up being a situation of ‘kill or be killed’, because we have to defend ourselves. If they don’t get us here, they could still get us at home, where we come from.”

True to his prediction, June saw another spate of killings on both sides, including that of Mbulelo Nqeto, an NUM shaft committee chairperson who was killed inside an office at Western Platinum.

Motlanthe has argued that the key to restoring stability in the mining sector is effective policing and the prosecution of the perpetrators of episodic violence in Marikana.

Still behaving like a man in hiding, Dlunga met the M&G in Wonderkop recently, taking us on a disorienting set of turns — perhaps to throw off stalkers. He then offered a theory on the unrelenting violence.

“In Xhosa, when somebody dies, we ask: ‘Who did he have problems with?’ When police came [to Nkanini] initially, they came with NUM members dressed in balaclavas, kicking doors down. They’d give NUM members police gear and they’d conduct raids at night. They can’t solve any murders because they have already proven themselves to be in support of one side against the other.”

Arrests
Soon after the Farlam commission into the Marikana killings began, Dlunga was arrested by police when they broke down his shack door and found an unlicensed firearm.

Other colleagues were rounded up after attending the hearings. They were released on bail several days later, bearing scars on their faces, and many recounted how they had been tortured as police pressed them for the whereabouts of their colleagues.

NUM office bearers, meanwhile, claim that most of those killed in the aftermath of the Marikana massacre were NUM members and also highlight a common rumour: that Steven’s death was related to Amcu’s internal jockeying for positions.

In the section of Wonderkop where Dlunga lives, residents say water has only been available early in the morning since the Marikana massacre.

These days, Dlunga believes that any talk of peace is doomed because “the people with the problems [who took part in last year’s Lonmin strike] still have not benefited”.

At a recent workshop at the University of the Witwatersrand, John Brand, a director at Bowman Gilfillan, spoke of how erroneous reports of “a heroic victory by workers of a 22% [increase]” have fuelled wage demands in the mining sector.

The settlement
“The average settlement throughout 2012 was 8%. No company is going to give out a 22% increase six weeks into the strike when the strike is already breaking down.

“What actually happened was that the maximum increase at Lonmin was 7.7% to the lowest grade,” Brand said.

“What they did [was] they conflated the lowest grade with the grade above it. They got a 7.7% increase in year one and a 10% increase in year two, and that happened to kick in on the first of October. So conveniently, it was very nice for the unions to say: ‘We have won you 17.7%,’ when in fact they had only won 7%.”

In Wonderkop’s shacklands, the feeling that last year’s strike was in vain is compounded by the state of neglect.

“Anybody with a toilet here, it is because they dug their own. People ask us to compare but this place is worse than home because there, at least you can see what the municipality is doing,” said Anele Nogwanya, a Lonmin employee.

As for the future of the framework agreement, indications are that Amcu has not abandoned it.

“They will be having meetings with members during the coming weekend to obtain a mandate,” said Albert de Beer, an independent labour adviser.

“It appears that their main concern is that the framework seeks to promote an all-comers type of ­dispensation regarding trade union recognition in the industry, while they are favouring multi-union recognition with properly defined thresholds for recognition.”