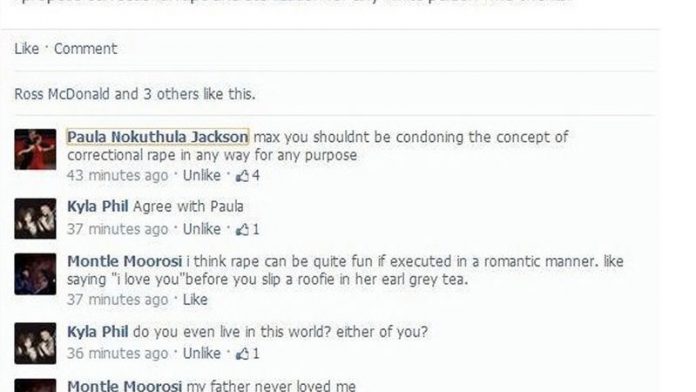 According to the magazine's website on Friday: "FHM would like to announce that following a disciplinary hearing held on Friday July 19 2013, presided over by an independent chairperson, former FHM employees Maxim Barashenkov and Montle Moorosi have been dismissed with immediate effect."

The dimissal follows the magazine's suspension of writer Moorosi and features editor Barashenkov for making comments about correctional rape on Facebook.

A status update posted on Barashenkov's Facebook page started a social media storm on Tuesday. The update read: "I propose correctional rape and sterilisation for any white person who twerks." To twerk is to dance by vigorously shaking your bottom.

One of Barashenkov's female friend's rebuked him saying "corrective" rape should never be condoned. Moorosi then commented: "I think rape can be quite fun if executed in a romantic manner. Like saying ‘I love you' before you slip a roofie [Rohypnol, a sedative] in her Earl Grey tea."

Facebook friends derided the comments to which Barashenkov replied: "I myself was a victim of correctional rape, so I can make jokes about it."

"FHM was horrified to learn of the incredibly offensive comments made by two of our staff members on their private Facebook pages," editor Brendan Cooper told City Press on Tuesday.

"These comments in no way reflect FHM's values. The opinions expressed are hurtful and deeply offensive and entirely unacceptable to FHM's management."

Apology
On Thursday, the writers sparked fresh outrage after publishing an apology on their blog.

"We apologise sincerely for our distasteful and insensitive comments and would especially like to extend our apologies to anyone who has ever gone through the horror of rape," it said. – Additional reporting by Sapa

M&G Hangout: When is a rape joke not a joke?

Rape is never a joke