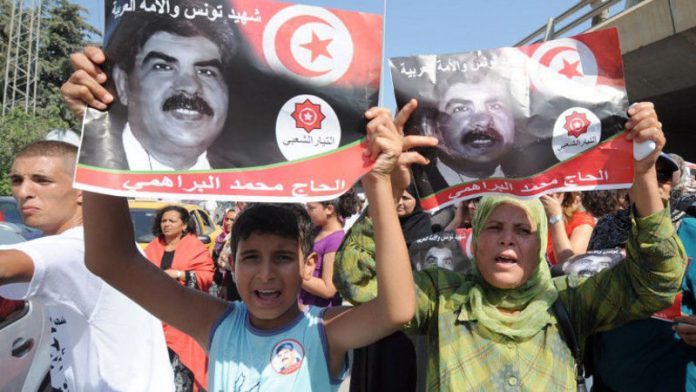 Police began firing after the arrival of thousands of opposition protesters who had been attending the funeral of the assassinated secular politician Mohamed Brahmi, a Reuters reporter said.

Protesters threw stones back at police and there were several injuries.

Secular opposition parties are demanding the dissolution of the Parliament and the Islamist-led government. "The people want to topple the regime!" and "With our blood and with our souls we will sacrifice ourselves for the martyr!" people in the crowd shouted.

"Ghannouchi, assassin, criminal," others chanted, referring to Rached Ghannouchi, leader of the ruling Islamist Ennahda party that Brahmi's family says was behind the killing.

Ghannouchi has denounced Thursday's assassination as an attack on democracy.

In a counter-demonstration, hundreds of Islamists flocked in front of the Parliament chanting slogans condemning what they called an attempted coup against democracy.

The interior ministry issued a statement calling for calm.

The death of secular opposition figure Brahmi, gunned down outside his Tunis home on Thursday, came months after another secular leader, Chokri Belaid, was killed in a similar attack that stoked violent protests.

Brahmi was buried near Belaid's tomb at the Al Jalez cemetery in central Tunis, and mourners carried portraits of both slain politicians. The funeral was attended by Brahmi's widow and son and several prominent politicians.

Brahmi's death further deepened divisions between Islamists and their secular opponents that emerged after president Zine al-Abidine Ben Ali was toppled in 2011 in the first of the revolutions that also felled leaders in Egypt, Libya and Yemen.

Witnesses said one man was killed early on Saturday in an anti-government protest in the southern city of Gafsa.

Violence also broke out in several other cities. A bomb in a police car exploded in Tunis but caused no casualties, as authorities keen to maintain stability cast a nervous eye at events in Egypt where violence has spiralled since the Islamist president was ousted by the military.

Opposition walkout
The secular Democratic Alliance Party on Saturday withdrew 10 of its members from the 217-seat Constituent Assembly, taking the number of deputies who had withdrawn from parliament in protest against the killing of Brahmi to 52.

Khamis Kssila of the Nida Touns party said earlier the departing members would begin a sit-in to demand the dissolution of the assembly and formation of a national salvation government – ideas rejected by Prime Minister Ali Larayedh.

The assembly, controlled by Islamists, is in charge of drafting a new constitution for the nation of 11-million people.

Interior Minister Lotfi Ben Jeddou drew a direct link between the latest killing and the assassination of the Popular Front's leader Belaid.

Aiming suspicion at a hardline Islamist, the minister said the same gun had been used in Thursday's killing as in the Belaid attack.

Authorities have identified 14 Salafists suspected of involvement in Belaid's assassination, and most were believed to be members of the local hardline Islamist group Ansar al-Sharia, he said.

Tunisia's political transition since the revolt that toppled Ben Ali has been relatively peaceful, with the moderate Islamist Ennahda party sharing power with smaller secular parties.

But the government has struggled to revive the economy and has come under fire from secularists who accuse it of failing to curb the activities of Salafi Islamists. – Reuters