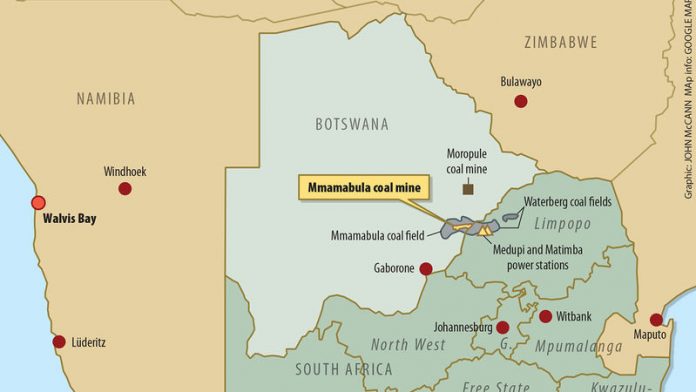 In Gaborone it is one thing to build a 100km rail spur from the Mmamabula coal deposits across the border to the Waterberg, but the idea of co-funding a major rail and port infrastructure project with South Africa that would certainly cost tens of billions of rands is about as appetising as week-old seswaa, the local meat dish.

The past few months have been unkind to Eskom, the company that is Botswana’s power supplier — or since the end of July when the thermal plant at Moropule B was scheduled to get up to full capacity.

First, in March, Nersa, the South African energy regulator, put a lid on the requested 16% power price increases by Eskom and agreed to only an 8% increase, although the South African consumer breathed a sigh of relief after years of double-digit cost increases.

For the past six years, South African energy users have been confronted by average power-price increases of 25% to help to cover Eskom’s R500-billion of spending until 2017 to overcome an electricity shortage.

For Eskom, this was a major blow to its expansion plans, which required the continuation of double-digit price increases in order to ensure that it had sufficient revenue so as not to increase the South African national debt.

Eskom has debts of approximately R195-million and the Nersa announcement can only mean that, if South Africa wishes to avoid the continuing power shortages that have constrained economic growth, it will have to allow and underwrite more of Eskom’s debt.

Price increases
The price increases have been softened in Botswana by the government’s very substantial subsidies to power prices, otherwise the South African increases and the very high cost of generating power from diesel at Orapa would have been passed on fully to Botswana consumers.

Although electricity appears expensive now, the average Botswana consumer will certainly have to pay substantially more once Moropule B is fully operational and the Botswana Power Corporation is operating as a producer rather than simply as a transmitter of what has been for decades Eskom’s subsidised power to Botswana’s consumers.

But now Moropule B is finally completed, Botswana’s relationship with South Africa and Eskom, and with South Africa’s rail parastatal, Transnet, will enter a new and far more complex stage.

If Eskom’s problems with power generation were not difficult enough with Nersa refusing its tariff increases, a new problem with its coal-dependent business model emerged during the past week.

The megawatt munchers of South African heavy industry, the so-called Energy Intensive Users Group, announced what many have known for a while — that, even with the building of giant, but delayed, power stations such as Medupi with an estimated 4 800 megawatts of power (about the equivalent of eight Moropule B power stations), South Africa will not have enough coal by 2015 to supply them and the country will fall off what is called a “coal cliff”’. So not enough power stations and now not enough coal.

But this is not because South Africa is running out of coal, at least not immediately, but rather because no new coal mines have been developed in the past few years and there is insufficient rail infrastructure to move the coal from the new Waterberg coalfields to the old power stations around Witbank.

Enter Botswana
South Africa, at least for the immediate future, does not require Botswana’s coal if it can get its mines operating and develop its rail infrastructure. But it will probably need Botswana’s coal within a decade.

The South African National Planning Commission said, in one of those typically Anglo-Saxon understatements, that South Africa has “heavily underinvested in infrastructure” over the past two decades.

Indeed, in the area of coal transport and export infrastructure, because South Africa did not develop sufficient railway lines and expand port facilities at Richards Bay and elsewhere, it missed the great coal boom of the past decade that peaked in 2007 and thereby allowed other countries to enter the Chinese and Indian coal markets.

South Africa desperately needs to expand the heavy haul line from the rich coal deposits in the Waterberg to Witbank.

And Botswana’s richest and best quality coal deposits are at Mmamabula, about 100km as the crow flies from the Waterberg.

At present, Botswana and Namibia seem determined to build a railway to Walvis Bay in Namibia, because both consider each other as stable and reliable partners.

But for Botswana, whose coal deposits are on its eastern border, it is much further and the port is in the wrong ocean for a coal market largely in India.

Privately, the coal miners, who do not wish to offend the government, are not at all convinced by the commercial viability of the trans-Kalahari route. To be viable, it would have to be ramped up quickly to carry 50 megatonnes (Mt) a year.

Although both Windhoek and Gaborone seem committed to it, they are going to have to convince very sceptical mining companies and even more sceptical bankers that the trans-Kalahari railway makes commercial sense.

Botswana has already started trial shipments to export coal. It is understood that the Moropule coal mine, owned by Debswana (De Beers and the government of Botswana) and the only coal mine in the country, has started to export coal to Turkey through South Africa.

New railway
The existing rail network can carry about 10Mt a year from Botswana and, with some improvement, could possibly be increased to 20Mt.

But Cecil John Rhodes’s railway from Mafikeng to Bulawayo is simply not up to the task of shipping up to 90Mt of coal a year. So a new railway must be built if Botswana is to achieve its coal export dream.

As more and more of the increasingly financially desperate junior mining companies that have discovered commercial coal deposits in Botswana look to evacuate their coal, the direction they will be taking will be based on existing railways to South Africa, at least initially.

In 2012, President Jacob Zuma and Botswana’s President Ian Khama signed a memorandum for the export of Botswana’s coal to South Africa and this will probably add weight to the argument to go the South African route.

In Gaborone and Windhoek, the political heart may say Walvis Bay but the pocket is likely to say Richards Bay. But which route wins will depend in no small part on how much investment Transnet will seek to get out of Botswana.