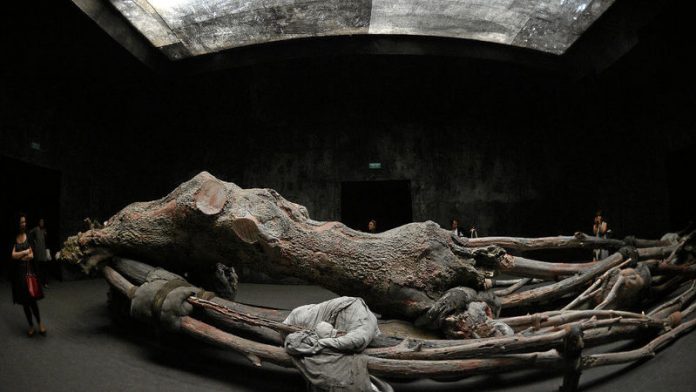 At the Bauer hotel, just west of Piazza San Marco in Venice, you can’t order a drink at the thronged canalside bar. You have to go to a nearby cashier, place your order (a martini is €25) and obtain a scontrino — an A5-sized receipt fed through an old dot matrix printer, which you can redeem for your drink if you’re able to make it back to the bar, past the revellers.

All of this takes a fair amount of patience and a well-timed shove or two, but I had enough practice thanks to three days at the vernissage of this year’s Venice Biennale, the art world’s cross between the Olympics and an American high school prom.

The biennale consists of an international exhibition, curated this year by Massimiliano Gioni of the New Museum in New York, and 88 national pavilions presenting solo or group shows of artists from Angola (the winner of this year’s Golden Lion for the best pavilion) to Zimbabwe. Many pavilions, especially those of wealthier countries in the Giardini della Biennale out east, require a long wait to enter on the show’s first days, but if you shove strategically, you can cut the time in half.

On the first days, the queue extended discouragingly outside the Belgian pavilion, which contains a single work by the Flemish sculptor Berlinde de Bruyckere: a massive waxen tree trunk, lying in a crepuscular gallery with the skylight blacked out. Other branches have been lashed to the tree, and parts are wrapped in blankets or bloody rags, like an injured body, or have pillows fastened to them.

Here and there the surface looks not like bark, but like a dead white person’s flesh, a sickly taupe at times, stained red or pink. The sculpture, and in turn the exhibition, are titled Kreupelhout, rendered into English as “Cripplewood” by the curator of the Belgian pavilion: one JM Coetzee, described in press materials as “a novelist, essayist, linguist, translator and recipient of the 2003 Nobel Prize in Literature”.

Curator
To my disappointment, curator Coetzee was not at the vernissage nor at the bar of the Bauer (he was attending a literature festival in Norway and visited Venice later), and the real work of organising the exhibition fell to the curatorial staff at SMAK, the Flemish Municipal Museum of Contemporary Art.

Coetzee’s role, as made clear through email correspondence included in the show’s trilingual catalogue, was to inspire De Bruyckere’s sculpture in an indirect fashion: through his fiction and through correspondence over about six months.

The new book, also titled Kreupelhout, with artist’s and author’s names given equal prominence on the cover, reads like a bizarre art world mutation of Coetzee’s recently published correspondence with Paul Auster.

De Bruyckere calls Coetzee her “soul mate”, not a phrase I expect anyone has ever applied to him, and in long emails she regales him with descriptions of her tree as “a limbless torso, a phallus, ejaculating with all it has left”. She also, to my surprise, writes that the novel of Coetzee’s that has most informed her work is Age of Iron — his angriest and most politically engaged book, the only one that represents the apartheid state free of Kafkaesque allegory.

In his emails, which are shorter, Coetzee sounds like a very hands-off curator, offering De Bruyckere context on Roman myth or Christian iconography and remaining largely unconcerned with the mechanics of exhibition-making (he makes one terrible suggestion that De Bruyckere install bladders that squirt water on the gallery walls; she declines).

The Art
From Adelaide he contributes a short wall of text that riffs on the Dutch word for “cripple”. When asked how he feels about the artist’s work, his answer is “touched (aangeraak)”. Coetzee seems indifferent to the reply function of email, preferring the old-school fashion of recapitulating the points he’s responding to at the beginning of each missive. “Dear Berlinde,” begins one, “Thank you for your reflections on smashed cathedrals, St Sebastian and the Black Death.”

The Venice catalogue also contains a hitherto unpublished Coetzee story, The Old Woman and the Cats. Fans of Coetzee will already know this story from YouTube; the author read it at a literary festival in India, and Coetzee concedes here, using a digital word with which he’s evidently uncomfortable, that “unauthorised (pirated) transcriptions are circulating.”

It’s another Elizabeth Costello lesson, though now she has moved to a barren, Spanish-speaking village, not unlike the little town at the end of The Childhood of Jesus. Costello lives among an unspecified number of rescued feral cats, “so many of them”, as her son observes, “that they seem to split and multiply before his eyes like amoeba”.

She also shares her house with a Spanish custodian, named Pablo, to whom Costello plans to leave her estate: an echo of Lucy’s decision in Disgrace to sign her smallholding away to a caretaker named Petrus. Costello and her son debate the obligations humans have towards animals and the moral valence of contraception while the cats mill around, and the story is interwoven with images of De Bruyckere’s cripplewood, as parched and stunted as the Castilian plain where Costello is living out her last days.

Yet for De Bruyckere, Coetzee figures more as an aesthetic than a moral “soul mate”. This isn’t their first collaboration; for a publication entitled Allen Vlees (“All Flesh”), released last year in Belgium, De Bruyckere got permission from Coetzee to mash up his texts into one long, severe river of prose. Coetzee, in an email in this new catalogue, describes Allen Vlees as “quite a dark and powerful book (if ‘book’ is what it is)”. It is indeed a book.