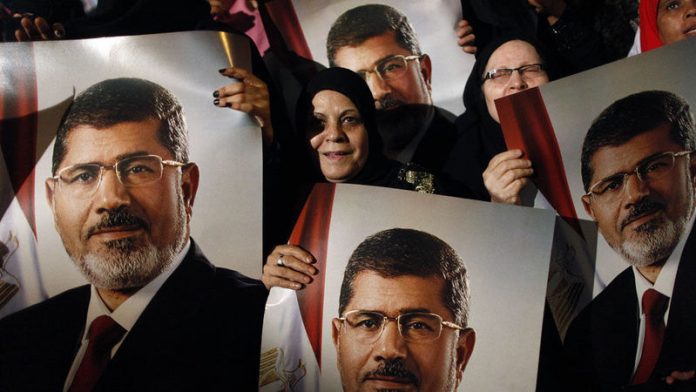 The envoys, trying to resolve a political crisis brought on by the army's overthrow of the Islamist Morsi a month ago, had visited jailed Brotherhood deputy leader Khairat El-Shater in the early hours of Monday. But he cut the meeting short, saying they should be talking to Morsi, spokesperson Gehad El-Haddad said on Monday.

Meanwhile several thousand Islamist supporters marched through downtown Cairo calling for Morsi's reinstatement and denouncing the army general who led his overthrow. Marchers chanted "Morsi, Morsi" and "We are not terrorists", and waved picture of the ousted leader.

The protest showed tension is still running dangerously high in Egypt despite the mediation effort by the United States, the European Union, Qatar and the United Arab Emirates.

Morsi became Egypt's first freely-elected president in June 2012, 16 months after the overthrow of US-backed strongman Hosni Mubarak, who had ruled for nearly 30 years. But fears that he was trying to establish an Islamist autocracy coupled with a failure to ease economic hardships afflicting most of Egypt's 84-million people led to huge street demonstrations, triggering the army move.

'Swallow reality'
Speaking about the talks in recent days, Haddad said the envoys "still carry the position that we should swallow the reality and accept that the military coup has happened and try to recover with minimum damage".

"We refuse to do so," Haddad told Reuters. There was no agreement on how to start talks, he added.

The state news agency said earlier that diplomats including US deputy secretary of state William Burns and European Union envoy Bernardino Leon had met Shater after midnight at the Tora Prison where he is being held south of Cairo.

Shater is seen as the political strategist of the group that propelled Morsi to office last year, and was arrested on charges of inciting violence after Morsi's downfall.

He told the envoys he could not speak on anyone's behalf, that only Morsi could "solve the mess" and that the only solution to the crisis was "full restoration of constitutional legitimacy and reversal of the coup", Haddad said.

"They invited him for discussions but he ended it abruptly saying those three statements. Then he walked out of the room," Haddad said, speaking by telephone.

Morsi is being held at an undisclosed location and facing an investigation into accusations including murder. Most of the rest of the Brotherhood's leadership is also in custody.

Violence on hold
The international mediation effort has so far helped to contain further violent confrontation between Morsi's backers and the security forces but has yet to broker a solution.

Thousands of Morsi supporters remain camped out in two Cairo sit-ins, which the government has declared a threat to national security and pledged to disperse.

The army-backed interim government said on Sunday it would give mediation a chance but warned that time was limited.

Almost 300 people have been killed in political violence since Morsi's overthrow, including 80 shot dead by security forces in a single incident on July 27.

Protesters
The protesters, nearly all men, marched 10 abreast and stretched back several blocks. Security forces made no attempt to disperse a crowd estimated by reporters at several thousand strong.

Mahmoud Isuafi, a businessman from the Nile Delta city of Mansoura, held a Koran in one hand and a picture of Morsi in the other. "The military came and stole our country, they stole everything," he said.

"I want democracy. Where is my vote? I can no longer elect my leader so I protest instead."

The military has laid out a plan that could see a new head of state elected in roughly nine months. The Brotherhood, an Islamist movement that spent decades in the shadows before Mubarak's downfall, says it wants nothing to do with it.

However, diplomats say the Brotherhood knows Morsi will not return as president and wants a face-saving formula for him to step down that guarantees it a stake in the political future.

Two US senators, Republicans Lindsey Graham and John McCain, were heading to Cairo on Monday at President Barack Obama's request to meet members of the new government and the opposition.

Before leaving, Graham said the Egyptian military must back out of politics quickly or risk a cut of the $1.5-billion in aid it receives from Washington each year. – Reuters