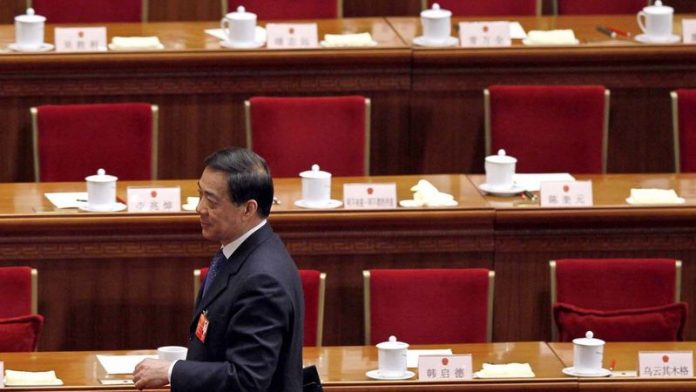 The explosive tale of power, money and murder made headlines around the world. The ruthless, charismatic figure at its heart has not been seen for almost a year and a half.

The case of toppled Chinese politician Bo Xilai has been a "time bomb", said one political analyst. Yet when it finally comes to trial at the imposing Intermediate People's Court in Jinan, almost certainly this month, Beijing will do its best to ensure a brisk and unremarkable hearing with a predictable result.

"In Bo's case, a not-guilty verdict is completely out of the realm of possibility," said Margaret Lewis, an expert on Chinese criminal law at Seton Hall University in the United States.

The former Chongqing party secretary was indicted last week for bribery, corruption and abouse of power. His fall was triggered by his police chief's sudden flight to US diplomats. Bo's wife, Gu Kailai, was last year convicted of murdering British businessman Neil Heywood.

As in previous high-level corruption cases, and Gu's murder trial, the hearing will be conducted before a carefully selected audience and is likely to last a few hours. Officials will probably issue a brief video clip of Bo in court, an outline of the case against him and a summary of his lawyers' response.

Bo's former police chief, Wang Lijun, faced a secret hearing the day before his announced trial date, but in his case state secrets were involved as he was charged with attempted defection as well as abuse of power.

Legal experts say 99% of Chinese cases end in conviction, and ­trials routinely focus on appropriate punishment rather than guilt or innocence.

Although procedure will be followed carefully, the sensitivity of Bo's case means sentencing will have been decided in advance at the highest levels, scholars and diplomats say.

"It's mainly a political process," said Cheng Li, an expert on elite Chinese politics at the Brookings Institution in Washington. "The leadership cannot afford this case to be out of control. It's only a show."

Careful staging does not equal courtroom drama. Witnesses rarely appear in Chinese cases, with the focus being on written testimony.

The delay in Bo's case has been attributed to his initial refusal to co-operate as well as elite disagreements about its handling. But it would be astounding if he pleaded not guilty. "The bottom line is that a deal has been made," said Li.

Lewis added: "China does not have a formal plea-bargaining structure, as does the US for example, but the government makes clear that confessions are a defendant's best hope for a lenient sentence."

It remains unclear whether the abuse of power claims relate to Bo's decision to turn a blind eye to the cover-up of the murder by his wife, but last year state media said he bore "major responsibility" for the case.

According to an online report in the Chinese magazine Caijing, which has since been deleted, the bribery accusations relate to his tenure in Dalian.

In a similar case last month, former railways minister Liu Zhijun was given a suspended death penalty – a sentence that is almost always subsequently commuted to imprisonment. But in Liu's case, the bribes cited were strikingly larger. Analysts expect Bo to receive a lengthy jail sentence.

Such an outcome will probably suit Bo's enemies in the party as well as his supporters, aided by muted domestic media coverage.

"The leadership does not want to have this case as the trigger for another round of criticism of the party and it certainly does not want the case under the spotlight too much," said Li.

Chen Ziming, an independent political analyst based in Beijing, said the case had been a time bomb because of the competing views of Bo. "If he was not brought to a trial, it would cause a lot of suspicion," he said. At the same time, trying him has carried risks because his backers blamed his fall on politics.

A commentary released by state news agency Xinhua after Bo's indictment stressed the need for stability and urged people to "wait peacefully for the legal trial". Though die-hard backers may show up at the court, a heavy security presence will ensure they are unlikely to remain there long.

The decision to hold Bo's trial in the unremarkable provincial capital of Shandong province, within easy reach for Beijing-based prosecution officials, has also been strategic.

"It would certainly be difficult for [the trial] to go back to places where he has political supporters," said Dali Yang, a political scientist at the University of Chicago, explaining why it will not be held in Bo's former fiefdoms.

After such a long wait, said Li, the trial will likely prove an anticlimax but, he added, there remains a very faint possibility of the scripted ­process going awry. Despite the ­careful arrangements, one factor cannot be completely controlled: the defendant.

As foolish as a burst of defiance might seem, risking a harsher sentence and perhaps repercussions for his family, "Bo could easily change his mind", said Li. "This is a very unpredictable personality." – © Guardian News & Media 2013

China’s battle for the future