Turned on in the city 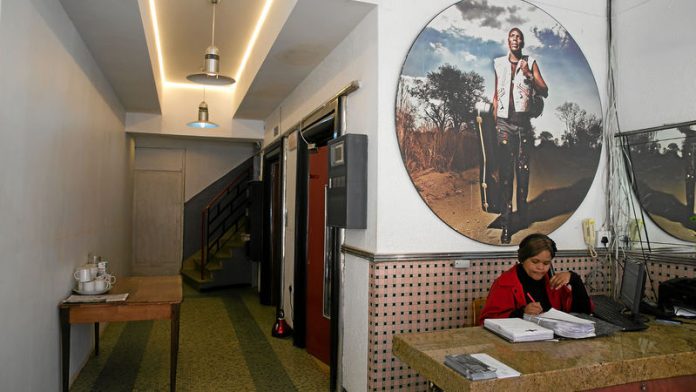 When you do a bit of writing for the travel pages you find your lodgings are ordinarily just one of the available colours on the palette you use to paint the broader environment. But then there are lodgings that are prismatic – buildings so historical and quirky you can’t resist allowing all of a place’s colours to refract through them. A good (though fictional) example would be the Best Exotic Marigold Hotel, from John Madden’s 2012 hit movie of that name.

My Best Exotic Marigold is the Bannister Hotel in Braamfontein, owned by photographer-turned-hotelier Andrew Bannister, whose album cover for Zimbabwean singer Oliver Mtukudzi’s album Wonai is still among the best I’ve seen. It’s appropriate that today this image of the Zimbabwean maestro sits above the hotel’s reception desk, because when Bannister first started renting out beds in 2006, after buying the building from his father in 2002, his guests were primarily Zimbabwean traders, in town for just a few nights to buy goods that were no longer available at home.

Braamfontein, at this point, was at a low ebb – a synonym, along with Hillbrow, for urban blight.

I first visited the Bannister in 2008, when it was called the Metro Hotel. I was researching aspects of Johannesburg’s history and was happy to be situated within walking distance of the Wits libraries, the recently opened Origins Centre at Wits, the Johannesburg Library and the fascinating compound of museums at Constitution Hill.

There was practically nowhere to eat at night, however, and you were guaranteed a mugging while crossing Nelson Mandela Bridge to the Market Theatre in Newtown after sunset.

The Metro itself was very much a work in progress, partly carried by intimidating long-stay tenants, though Bannister’s enthusiasm for his hotel’s future was always infectious. Beyond the reality of shared bathrooms and noise at all hours, Bannister saw three floors of pretty en-suite rooms, ready in time for the 2010 World Cup, and there was even talk of a roof-top pool.

A two-year turnaround plan spread to three, then six, but finally in March 2013 the Metro became the Bannister, a 43-room fulfilment (with a little work still to be done) of the original vision.

It had long been everything I’d ever wanted in a hotel stay: cheap en-suite rooms ("not cheap … inexpensive", Bannister always cautions), clean linen and Tropicana lights in the shower. My nightly routine of McDonald’s from Jorissen Street and cheap (in the other sense) wine from the local Pick n Pay and a paperback for company had likewise long ago been displaced by the century-old Kitchener’s Carvery two doors down, after it had been taken in hand by hipster zealots, resulting in edible food and floods of Wits students and local arty types come for jazz, comedy and electro nights.

To kick-start my worn engine the next day I’d slink into one of an exponentially growing number of Wallpaper magazine-ready café’s: Post, Doubleshot, Father Coffee or Daleahs, and on Sunday mornings I’d look forward to browsing the Braamfontein Neighbourgoods Market opposite the Bannister, the brainchild of visionary property developer Adam Levy.

Plus there was, and still is, more than enough post-colonial Johannesburg left behind to make a habitué of life’s margins feel at home – Somali-owned stores selling everything from TVs to tricolour bags, laundromats dating back to the days of the Randlords and a parking lot turned grotto in which women boil cow heads to sell in the central taxi rank.

The hotels in Braamfontein still rely on the trade of businessmen but tourist numbers are rising, and it’s that breed of traveller who’d choose South Pigalle in Paris over the 8th arrondissement, Georgia over France, and who will probably go on to visit the former Transkei ahead of the Kruger National Park.

Herein lies my punt for Braamfontein as a travel destination for locals: spend a weekend there, and you’ll no longer be infuriated by foreigners who know fascinating stuff about Mzansi that you do not.

Perfect weekend getaway for: Couples or individuals who are more interested in humans than animals, and value interesting architecture over pretty landscapes.