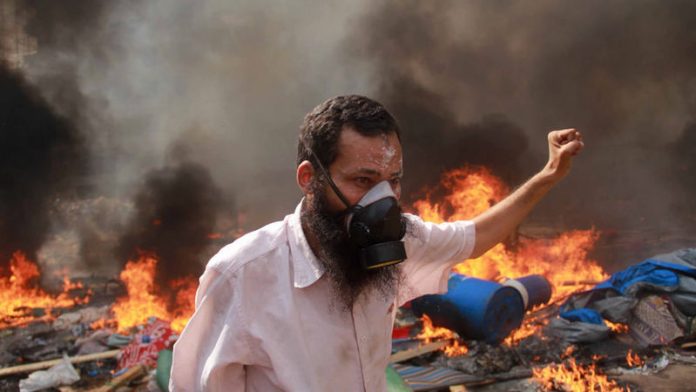 In a resignation letter to Interim President Adly Mansour, ElBaradei said that "the beneficiaries of what happened today are those who call for violence, terrorism and the most extreme groups".

"As you know, I saw that there were peaceful ways to end this clash in society, there were proposed and acceptable solutions for beginnings that would take us to national consensus," he wrote.

The government has imposed a state of emergency as unrest swept the most populous Arab nation.

The Egyptian government on Wednesday imposed a curfew that will last for the next month – or until further notice – in major cities including Cairo and Alexandria.

A government statement said the curfew would run from 7pm until 6am in 11 of Egypt's 27 provinces, including Suez.

The state of emergency followed countrywide clashes between supporters of Morsi and the security forces. "Whoever violates these orders will be punished with imprisonment," the government said in a statement. Earlier, the presidency declared a one-month state of emergency.

Troops opened fire on demonstrators in violence that brought chaos to areas of the capital and looked certain to further polarise Egypt's 84-million people between those who backed Morsi and the millions who opposed his brief rule.

The state of emergency, which started at 2pm GMT on Wednesday, is set to last a month. In the streets around the Rabaa al-Adawiya mosque in northeast Cairo, where thousands of Morsi supporters have staged a sit-in for the last six weeks, riot police wearing gas masks crouched behind armoured vehicles, tear gas hung in the air and burning tyres sent plumes of black smoke into the sky.

At a hospital morgue nearby, a Reuters reporter counted 29 bodies, including that of a 12-year-old boy. Most had died of gunshot wounds to the head.

A nurse at the same hospital had said she counted 60 bodies, and expected the number to rise. The unrest spread beyond the capital, with the cities of Minya and Assiut, and Alexandria on the northern coast, also affected.

Seventeen people were killed in the province of Fayoum south of Cairo. Five more died in Suez.

Wider conflict predicted
Mohamed al-Beltagi, a leader of Morsi's Muslim Brotherhood movement that led the protests, warned of wider conflict and singled out the head of the armed forces who deposed Morsi on July 3 following mass protests that called for his resignation. "I swear by God that if you stay in your homes, Abdel Fattah al-Sisi will embroil this country so that it becomes Syria. Abdel Fattah al-Sisi will push this nation to a civil war so that he escapes the gallows."

Nine hours after the start of the operation, crowds of protesters were still blocking roads, chanting and waving flags as security forces sought to prevent them from regrouping.

"At 7am they came. Helicopters from the top and bulldozers from below. They smashed through our walls. Police and soldiers, they fired tear gas at children," said teacher Saleh Abdulaziz (39) clutching a bleeding wound on his head.

"They continued to fire at protesters even when we begged them to stop."

The West, notably the United States which gives the Egyptian military $1.3-billion each year, has been alarmed by the recent violence in the strategic Arab ally that has a peace treaty with Israel and controls the vital Suez Canal waterway.

While the United Nations was still gathering information, "it appears that hundreds of people were killed or wounded in clashes between security forces and demonstrators", Ban's spokesperson said in a statement.

Meanwhile, Turkey has urged the UN Security Council and Arab League to act quickly to stop a "massacre" in Egypt, and Iran warned of the risk of civil war, after Egyptian security forces killed dozens of Islamist demonstrators.

European leaders criticised the violence against a camp of protesters seeking the restoration of deposed Islamist President Mohamed Mursi, calling for restraint and a return to meaningful dialogue to defuse Egypt's political stand-off.

Turkish President Tayyip Erdogan said international passivity had paved the way for the military-backed Egyptian government's crackdown, which included violence in areas beyond the capital that killed at least 14 protesters. "It is clear that the international community, by supporting the military coup [that ousted Morsi on July 3], and remaining silent over previous massacres instead of protecting democracy and constitutional legitimacy in Egypt, has encouraged the current administration to carry out today's intervention.

"The international community, especially the UN Security Council and Arab League, must act immediately to stop this massacre," Erdogan, whose government is Islamist-rooted, said in a statement.

White House reaction
The White House condemned a violent crackdown on protesters in Egypt on Wednesday and strongly opposed the declaration of a state of emergency made by Egypt's military leaders.

But White House spokesperson Josh Earnest gave no indication that the United States is prepared to immediately cut off its $1.3-billion in military assistance to Egypt.

He did say, however, that US aid to Egypt is under review, as it has been for weeks. "The world is watching what is happening in Cairo. We urge the government of Egypt – and all parties in Egypt – to refrain from violence and resolve their differences peacefully," he said.

Washington has found it has little leverage to influence events in Egypt. The United States initially said it would review whether the Egyptian military's July 3 ouster of Morsi was a coup, which would force Washington to cut off its assistance.

Officials ultimately decided not to make a decision about a coup one way or the other, a point that Earnest reiterated. "It has been determined by senior foreign policy officials in this administration to not make a determination, but rather to engage in a dialogue with the interim government of Egypt," he said.

Obama was briefed about the killing of at least 95 Egyptians and was being kept up to date on the situation by his national security adviser, Susan Rice.

With death tolls ranging from 95 to 800, Earnest said US officials were seeking clarification. "We have repeatedly called on the Egyptian military and security forces to show restraint, and for the government to respect the universal rights of its citizens, just as we have urged protesters to demonstrate peacefully," he said. – Reuters