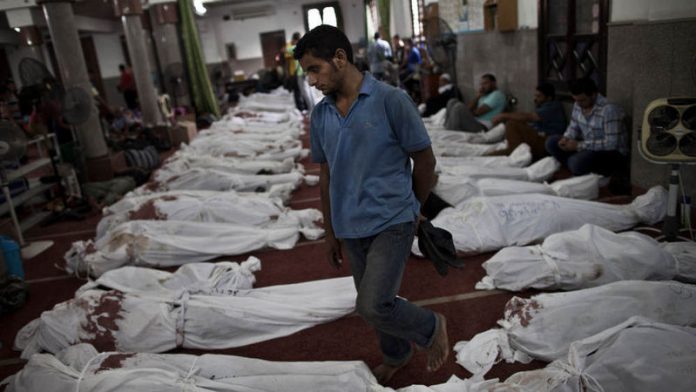 Supporters of Egypt's Muslim Brotherhood stormed and torched a government building in Cairo on Thursday.

Egypt's health ministry says 578 people were killed and thousands wounded in the worst day of civil violence in the modern history of the most populous Arab state.

Brotherhood supporters say the death toll is far higher, with hundreds of bodies as yet uncounted by the authorities, whose troops and police crushed protests seeking the return of deposed president Mohamed Morsi.

State television quoted the interior ministry as saying the security forces would again use live ammunition to counter any attacks against themselves or public buildings.

International condemnation rained down on Cairo's military-backed rulers for ordering the storming of pro-Morsi protest camps after dawn on Wednesday, six weeks after the army overthrew the country's first freely elected leader.

The US state department said it would review aid to Egypt "in all forms" after President Barack Obama cancelled plans for upcoming military exercises with the Egyptian army, which Washington funds with $1.3-billion in annual aid.

"The United States strongly condemns the steps that have been taken by Egypt's interim government and security forces," Obama said in an address from his vacation home on the Massachusetts island of Martha's Vineyard.

"We deplore violence against civilians. We support universal rights essential to human dignity, including the right to peaceful protest."

Western diplomats have told Reuters that senior US and European officials had been in contact with Egypt's rulers until the final hour, pleading with them not to order a military crackdown on the protest camps, where thousands of Morsi's followers had been camped out since before he was toppled.

There were reports of protests on Thursday but no repeat of the previous day's bloodbath.

In Alexandria, Egypt's second largest city, hundreds marched, chanting: "We will come back again for the sake of our martyrs!" Brotherhood spokesperson Gehad El-Haddad said anger within the 85-year-old Islamist movement, which has millions of supporters across Egypt, was "beyond control".

"After the blows and arrests and killings that we are facing, emotions are too high to be guided by anyone," he said.

The Brotherhood has called on followers to march in Cairo later on Thursday, while funeral processions for those who died provide further potential flashpoints over the coming days.

In Cairo, Reuters counted 228 bodies, most of them wrapped in white shrouds, arranged in rows on the floor of the Al-Imam mosque in northeast Cairo, close to the worst of the violence.

The mosque had been converted into a charnel house, resembling the aftermath of a World War I battlefield.

Medics pushed burning incense sticks into blocks of ice covering the bodies and sprayed air freshener to cover up the stench. Some men pulled back the shrouds to reveal badly charred corpses with smashed skulls. Women knelt and wept beside one body. Two men embraced each other and shed tears by another.

The bodies, piled there because morgues and hospitals were full, did not appear to be part of the official tally of 525 killed, which also includes more than 40 police and hundreds killed in clashes outside of the capital.

Several thousand people gathered in the square outside the mosque, chanting: "The army and the police are a dirty hand!"

In the Giza section of Cairo, Morsi supporters set fire to a governorate building, while state television said two police officers were killed in an armed attack on a police checkpoint in the area.

'Military tyranny'
Army chief General Abdel Fattah al-Sisi removed Mursi from power on July 3 in the wake of huge protests by people frustrated at a lack of progress on economic reform and wary of what they saw as a creeping Islamist power grab.

The subsequent crackdown suggests an end to the open political role of the Brotherhood, which survived underground for decades before emerging as Egypt's dominant force after autocrat Hosni Mubarak was toppled in a 2011 uprising.

"It's not about Morsi any more. Are we going to accept a new military tyranny in Egypt or not?" Haddad said.

Shocking scenes, including television footage of unarmed protesters dropping to the ground as security forces opened fire, have been seen around the world. But many Egyptians stridently support the crackdown and bitterly resent international criticism of the army, underlining how deeply divided society has become.

Churches around the country were attacked and many torched on Wednesday, manifesting the fear of an Islamist backlash among the Christian minority that makes up 10% of the population of 85-million.

The authorities and their allies, which control nearly all media inside Egypt, insist those inside the pro-Mursi camps were heavily armed, although international journalists have seen only limited evidence of weapons beyond sticks and rocks.

"The Brotherhood would never agree to a political deal," said Ismail Khaled, 31-year-old manager in a private company.

"They are terrorists and violent, and what happened was the only logical way to end their sit-ins, which did have weapons and … violent people. Thank God the police ended them. I wish they had done so sooner."

Cairo and other areas were largely calm overnight after the army-installed government declared a month-long state of emergency and imposed a curfew on the capital and 10 other provinces beginning at 1700 GMT and ending at 6am.

The US state department called for the immediate lifting of the state of emergency on Thursday. While most large Egyptian companies remained open and shipping sources said the Suez Canal and its ports were operating normally, the stock exchange was closed and the central bank told all banks to stay closed.

Some international firms halted production in and around Cairo, including Electrolux and General Motors. A military source said that while sit-ins like the main one outside the Rabaa al-Adawiya mosque in Cairo would no longer be tolerated, marches may be permitted in spite of the state of emergency.

In other examples of international condemnation, French President François Hollande summoned the Egyptian ambassador to demand an immediate halt to the crackdown.

"The head of state asserted that everything must be done to avoid civil war," the Elysee Palace said in a statement.

In Ankara, Turkish Prime Minister Tayyip Erdogan called for the UN Security Council to convene quickly and act after what he described as a massacre in Egypt.

UN High Commissioner for Human Rights Navi Pillay called on all sides to "step back from the brink of disaster". Pillay, a former UN war crimes judge, said the death toll pointed to "an excessive, even extreme use of force against demonstrators".

But the United Arab Emirates, one of several Gulf Arab states that collectively sent $12-billion to fund the interim government, expressed support for the crackdown, saying the Egyptian government had "exercised maximum self-control".

Back on the streets of Cairo, some spoke of their despair and their fear for the future.

"Yesterday I cried. I think we're the furthest we've ever been from true reform or justice," said Sara, who declined to give her last name, describing herself as a secular activist.

"I don't believe that this is going to end in one month. I think is the beginning of another 30 years of military rule." – Reuters