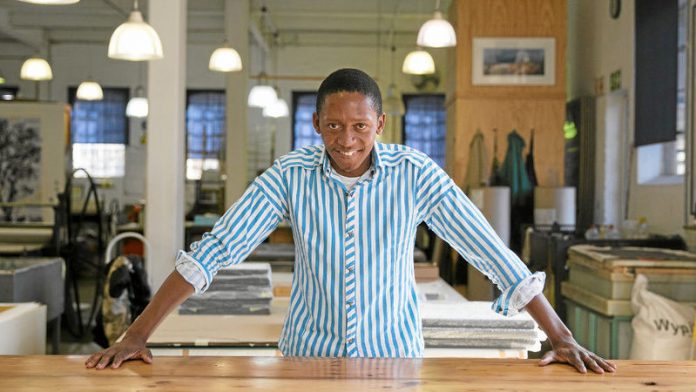 Printmaker Senzo Shabangu, whose large-scale works are colourful, irreverent and political, is a star on the rise.He was born in Driefontein in Mpumalanga and came to Johannesburg at the beginning of 2006 to become a pilot. Instead he ended up studying printmaking at the Artist Proof Studios in Newtown for three years. After many group exhibitions and a prestigious residency under the mentorship of artist David Koloane at the Bag Factory Studios in Fordsburg, Shabangu is ready to launch his first major solo show at David Krut Projects. Titled Obsession, it reflects on issues of youth, political power and powerlessness with his exploration of service delivery protests.

How big is the show?
It is a solo exhibition consisting of 32 works. It is a very important show to me. Before, I exhibited with a lot of artists, and in the David Krut bookshop.
This is my third solo show with David, but the first one in the big gallery. I also managed to do stuff that I never thought I would do, such as sculpture. We cast some bronze and that was my first.
I never studied sculpture. I have specialised in printmaking and so I turned some of my drawings into objects that you can touch, in 3D.

Who has been teaching you to cast the bronze and to work with other materials?
I told myself that I don’t want the influence of books. I just wanted to do it myself.  But I was lucky to go to Lesotho where David is connected to some guy there who specialises in ceramics. His name is Patrick Rorke. So I went to stay with him for two weeks and he taught me how to use the wheel.
In my sculpture I wanted to combine human figures with objects such as dishes and plates.

In some of the works one can see a likeness to President Jacob Zuma.
In the print called Sins of our Leaders, I used a reference and I will agree that it’s him. The other two people are just people from my imagination.
What’s happening in the piece is that I am talking about power. I found out that there is a huge gap between the elders and the youth, so my work talks about the power that we are all obsessed with.
I found out that we need to learn a lot, to be given a chance to learn from the elders, as the youth of today. But the title of the show, Obsession, is also about my obsession with art.
At the same time, I am also obsessed with the response of my audience because, where I grew up, I never thought that one day I would be able to see a human being put his hands in his pocket and buy my work. In the work, Bon Appetite, I show my appreciation to my audience. As an artist, one is some sort of chef &ndash;what we create is like what we cook.

What do you enjoy eating?
I cook for myself and I am a traditional guy – I eat meat and pap. But I have a fiancée now so she cooks for me. We’ve been engaged since last year. We live in a house in Kensington and we have a baby girl.
I go to Queen Street a lot and, if I’m not in the German pub, then I’m in the local Portuguese restaurant. I love the coffee and the muffins that they do.  On Sunday, I come to Arts on Main. The whole place, including the market, has a soul, a spirit that I really want. The people have energy.
But I am a simple guy. I love eating at home and inviting my friends around.

Are you an art collector?
I exchange and I help artists. Last year I got a work by Sam Nhlengethwa and I have work by my friend, Nelson Makamo.

Do you read a lot?
I love art books. I love South African artists such as Dumile Feni and William Kentridge. There is a DVD on Dumile that will show at the Bag Factory art space soon.

Do you have a soundtrack to your life?
Prayer by Charles Lloyd is usually playing in my mind&ndash; and the song by him titled Water is Wide.

A survey of Jackson Hlungwani’s practice presents a transcendental experience, even for non-believers
Read more
Friday

Artist Dada Khanyisa on responding to the opportunities that their practice offers them, by all means necessary
Read more
Friday

Although the artist is starting a whole new conversation, he picks up on threads from his earlier shows and expands on them.
Read more
Friday

Instead of overanalysing the context from which these Limpopo artworks sprung, we should enjoy them for their individual merits.
Read more
Friday

For many hoping to see their work placed in the public sphere, the easy route seems to be an approach of "play-play".
Read more
Friday

A new sculpture that neatly aligns commercial interests with art and our history has the twitterati frothing about apparent opportunism.
Read more
Advertising
Continue to the category
Politics