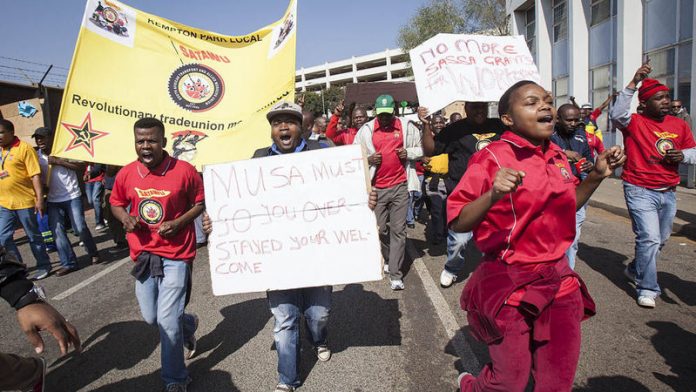 "The entities also refute claims by … Satawu [the South African Transport and Allied Workers Union] that its industrial action at SAAT has paralysed operations. SAA operations continue to operate with minimal disruptions, a fact which can be independently verified," he said.

The union initially demanded a 12% wage increase and the airline offered a 6.5% hike. Satawu general secretary Zenzo Mahlangu said on Tuesday that its members wanted a double-digit increase.

Tlali said SAA had 31 flight departures out of OR Tambo International Airport between 6am and noon on Tuesday, of which only one was delayed for 17 minutes as a direct result of the strike.

"It is unfortunate that Satawu continues to propagate exaggerated and unfounded claims," he said.

Union seeks a fresh mandate
"This is utterly deceitful as the company conducts its business in line with international and local regulatory prescripts," he said.

"SAAT and SAA would under no circumstances deploy its personnel or any contractor to work on matters that they are unqualified or uncertified for. The SAA group of companies puts the safety of customers and crew above anything else."

SAA met with labour representatives on Monday afternoon and tabled an improved offer, with the consensus being that the union would seek a fresh mandate from its members on whether to accept the offer.

"It is thus regrettable that Satawu has insinuated that they would revert to their initial demand of 12%," Tlali said.

"The SAA group views this demand as unrealistic, especially given the current gloomy economic situation and the financial challenges that the company is grappling with."

He said throughout the negotiations, SAA had been forthright with unions regarding what the company could afford.

SAA 'is still hopeful'
SAA expected unions to understand that the offer placed on the table was informed by what the company could afford based on the existing, limited resources.

"The company is still hopeful that a speedy resolution to the current impasse can be found," he said.

"The airline urges customers to check their flight status before going to the airport. The SAA group will continue to keep customers and the public informed about developments around this matter."

Satawu spokesperson Vincent Masoga said on Tuesday evening that negotiations had come to a halt, and it was not known when they would resume.

"The employer has delayed in order to try and break the spirit of the strike and the morale of the workers," he said.

"However, it is unfortunate. They are going to be to be disappointed. We are confident that the strike is legal."

Tlali was not available for comment about the halt in negotiations. – Sapa