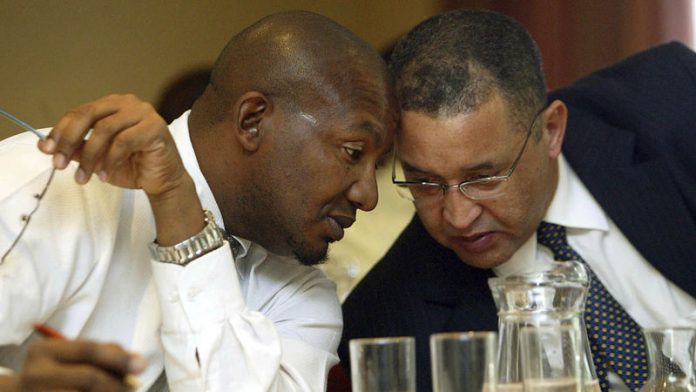 This emerged from the disciplinary hearing of a senior prosecutor, advocate Nomgcobo Jiba, now the acting national director of public prosecutions. Jiba had been suspended in November 2007 for helping police to secure an arrest warrant for Gerrie Nel, the Scorpions head in Gauteng.

In support of Jiba, Richard Mdluli, then a regional but later national crime intelligence boss, filed an ­affidavit in which he provided a long transcript of one of McCarthy's calls, purporting to show that McCarthy was blocking the police investigation of Nel. Mdluli alleged the interception flowed "from a completely different investigation that was conducted against certain persons involved in drug dealing", including, he claimed,  McCarthy.

According to later court statements by Mdluli's predecessor in crime intelligence, Mulangi Mphego, the so-called drug investigation formed part of an undercover operation opened in March 2007, but which was part of a broader police intelligence project on the National Prosecuting Authority (NPA) that began in 2003, or even earlier.

That project, dubbed Operation Destroy Lucifer, appears to have been informed by the conflict between the Scorpions and national police commissioner Jackie Selebi.

Among the targets were McCarthy and Ivor Powell, the journalist-turned Scorpions investigator.

That surveillance did not deliver any evidence that McCarthy was involved with drugs, but did provide police with reams of information to use against him, including the way in which he was allegedly dabbling in politics around the Zuma case.

All the evidence suggests that it was these crime-intelligence recordings that were delivered to Zuma's lawyer, Michael Hulley, in February 2009 and then played to two NPA representatives, Willie Hofmeyr and Sibongile Mzinyathi, to supplement Zuma's representations as to why the corruption charges against him should be dropped.

Because of concern about whether the recordings had been obtained or disclosed illegally, the NPA approached the National Intelligence Agency (NIA).

The NIA revealed it had also been monitoring McCarthy's communications, in this case as part of an investigation into the production and leaking of the so-called Browse Mole report.

The 2006 report, authored by Powell and delivered to McCarthy, outlined, among other allegations, claims that the Angolan intelligence establishment planned to covertly support Zuma in his presidency bid.

A version appears to have been intercepted and leaked to Cosatu in May 2007.

The union federation, which was a firm backer of Zuma, used the document to propel a campaign alleging the Scorpions were engaged in illegal intelligence gathering and were manufacturing scare-stories ­targeting Zuma. The leak led to an overt official investigation and also a covert but legally approved interception of McCarthy's conversations by the NIA. It was the NIA intercepts that were then used to confirm the authenticity of the recordings played to the NPA by Hulley.

What's on the recordings?
Transcripts released by the NPA at the April 2009 press conference announcing that charges against Zuma had been dropped focus on conversations that suggest McCarthy had embroiled himself in the ANC's factional battles ahead of the December 2007 Polokwane leadership showdown between Zuma and then-president Thabo Mbeki.

They purport to show that McCarthy had, among other things, attempted to influence the timing of the announcement of the decision to charge Zuma based on perceptions of whether it would help or harm Mbeki's election chances.

They suggest he was highly sympathetic to Mbeki's cause and was in contact with others perceived as being in the Mbeki camp, including the former national director of public prosecutions, Bulelani Ngcuka, and businessman Mzi Khumalo.

That much is known
But notes of a March 2009 briefing by Hofmeyr and Mzinyathi on the recordings Hulley played to them suggest the crime-intelligence surveillance was much broader and longer-term than the NIA bugging.

The notes, seen by amaBhungane, include a reference to a conversation between McCarthy and another senior NPA manager suggesting that "Willie [Hofmeyr] sold them out – he is on JZ's side."

But they also include material from 2003, when the fight between Zuma and Mbeki was just gaining momentum and Zuma was being backed by the late mining magnate Brett Kebble.

The notes speak of a "seven-hour conversation" with Kebble to try to persuade him to change sides and that, at a later date, McCarthy told people that the case against former police commissioner Jackie Selebi was "a plot" driven by the Scorpions' Gerrie Nel.

Other titbits seemingly dating back to 2003 include the allegation that Ngcuka had said Zuma was "on his way out" before announcing that year that there was a "prima facie case" against him, but that he would not charge him; and that a well-known businessman had threatened Kebble with the Scorpions should the latter not help him with his political ambitions.