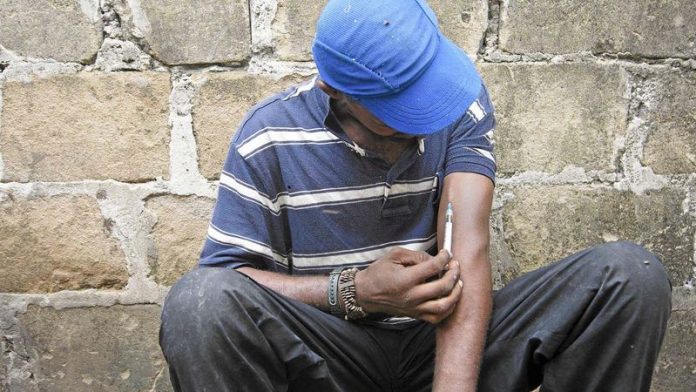 In his speech on the World Day against Drugs on June 26, Tanzania's prime minister, Mizengo Pinda, lamented that drugs are a national tragedy in the East African country.

According to Pinda, more than 10799 Tanzanians have been charged with drug-dealing in the past five years. And the country's minister for foreign affairs and international co-operation, Benard Membe, conceded last year that Tanzania is one of five countries in the Southern African Development Community region implicated in illicit drug trafficking.

Tanzanian drug dealers and smugglers are active in the wider drug world. Last year more than 103 were arrested for cocaine smuggling in Brazil, and 200 in Hong Kong, according to Pinda.

A recent report of the Tanzania Drug Control Commission indicates that Tanzania has more than 4684 registered addicts.

The main market for drugs is the municipal area of Kinondoni in the capital, Dar es Salaam, where rich householders live cheek by jowl with thugs, prostitutes and drug users. Close to half of the registered users are to be found there.

The commission reported this year that 11% of drug users were infected with hepatitis B, 68% had hepatitis C and 40% were HIV positive.

The government has opened two clinics that dispense the opioid methadone, which serve more than 1000 heroin addicts.

Why Tanzania?
The 2013 report of the United Nations Office for Drugs and Crime (UNODC) indicates that East Africa is a major target for traffickers wishing to enter African markets because of its unprotected coastline, major seaports and airports and porous land borders, which provide multiple entry and exit points.

Also attractive to the drug syndicates are inadequate customs controls and cross-border co-operation, as well as weak criminal justice systems.

Heroin is imported to East Africa directly from Afghanistan, Pakistan and Burma through Thailand. Much of it finds its way to South Africa, but there is also a reverse movement of drugs from South Africa to Tanzania and Kenya.

A UNODC map shows that heroin and cocaine also filter across Tanzania's borders into Mozambique, Malawi and Zambia. Some of it is shifted onwards to the United States and Western Europe.

The 2012 UNODC report said smaller quantities of heroin are moved by air, making use of both cargo and courier services. Most ship-borne narcotics are thought to pass through Zanzibar, the semi-autonomous island 25km from the coast, where they are offloaded and then moved to the mainland in small consignments in boats.

Most methaqualone, known in Africa as mandrax, originates in India and China and passes through East Africa on its way to South Africa.

East Africa is also known as a major producer of cannabis, principally for consumption in Western Europe. Seizure patterns also suggest that some marijuana is exported from Afghanistan and Pakistan to the East African coast, with Zanzibar being the main entry point.

Recent reports of significant thefts or losses of ephedrine and pseudoephedrine in East African countries, including Tanzania, are also worrying. They may indicate that these precursor substances are being diverted from legal domestic ­distribution channels into the illicit manufacture of amphetamine-type stimulants in Africa.

Smaller quantities are smuggled into North America, and the illicit manufacture of methamphetamine (tik), methcathinone (cat) and methaqualone continues to take place in South Africa. However, the recent arrest of two Tanzanian women for attempting to smuggle tik into South Africa suggests that processing is now taking place in Tanzania.