Geek out on nerdish ?reality show 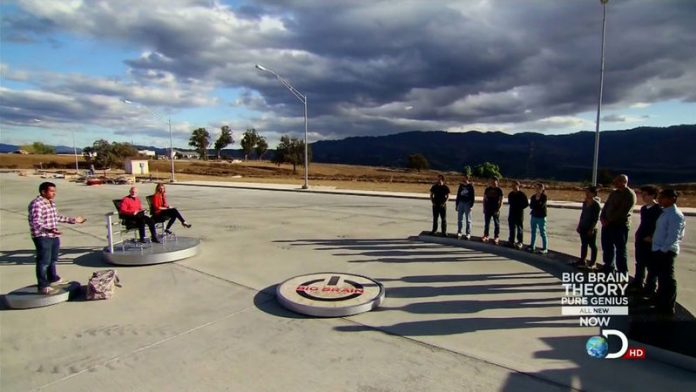 It's easy to imagine the boardroom discussion that led to the creation of The Big Brain Theory. People love competitive reality shows such as Master Chef. And they love gonzo engineering shows like Mythbusters. Why not combine the two?

The result is The Big Brain Theory, a reality series in which teams of hip engineers compete to solve tricky design problems. There is some artificial melodrama, as is compulsory in these things, but this is mostly a show about the joy of constructing intricate machines. As someone whose childhood included more than a few mad-scientist fantasies, I found it quite charming.

The basic format will be instantly familiar to anyone who has watched any reality TV. There's a group of contestants who compete in weekly challenges. Every episode ends with one of the contestants being eliminated. The winner gets a cash prize and a job. None of this is particularly novel or unusual.

What is unusual is the extreme difficulty of the challenges. There are lots of reality shows in which the people have to cook meals, sing in front of an audience, or simply out-scheme each other.

In The Big Brain Theory, by contrast, teams of contestants have to complete a series of ridiculously exacting tasks: stabilise a ?bomb so that it doesn't explode; shoot down a missile in mid-air; protect a human being against jets of fire.

Sometimes, one suspects that these challenges might actually be too difficult. Several episodes end in a stalemate of sorts, as both teams fail to complete their objective fully. Rotors fall apart, motors blow up, mathematical models turn out to have been incorrectly calculated. But all of this serves to reinforce one of the core themes of the series, which is that engineering, in addition to being cool, is also really hard.

In any case, the level of difficulty forces the contestants to build some seriously impressive pieces of machinery. In one episode, a team takes five days to construct a 60-barrel anti-aircraft gun that fires metal slugs using compressed air. (A message before the credits coyly warns viewers to avoid trying this at home.)

The producers try to make it easy for the audience to follow along, using 3D animations to illustrate the designs created by the contestants. This makes it easier to visualise the technology, and it also makes it possible to spot potential flaws. Much of the pleasure of this series comes from trying to second-guess the designs, and figure out the problems that could lead to catastrophic failure.

The Big Brain Theory is mostly about the engineering, but there are some obligatory reality-TV conventions that must be fulfilled. Certain contestants seem to have been purposefully invited on to the series because they seemed likely to alienate everyone else. There are some personal conflicts that have probably been exaggerated in the editing room. But such moments are relatively rare: for the most part, The Big Brain Theory is refreshingly straightforward.

Of course, a series like The Big Brain Theory will never dominate the national conversation in the way that Master Chef does in Australia. This is a reality show for nerds, which means that its cultural impact will surely be limited.

But really, who cares? Some of us just want to geek out on cool technology, and this is a series that successfully taps into that childlike sense of fascination. Rube Goldberg would have approved.

The Big Brain Theory is shown on Wednesdays at 9.25pm on Discovery Channel

SABC’s censorship of news recalls the days of apartheid