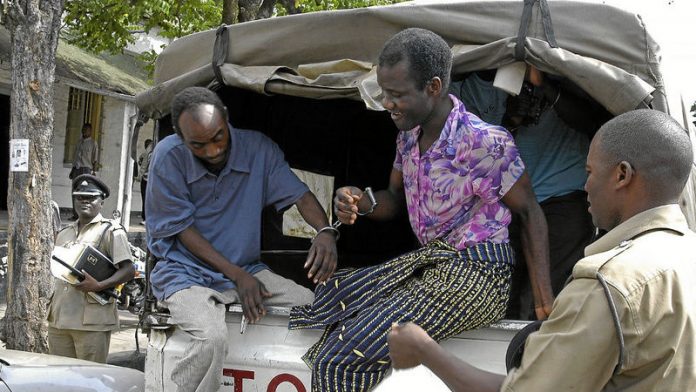 Two with South African connections and dated 2013 are Sara Blecher's Two Men and a Wedding and Heidi Grunebaum and Mark J Kaplan's The Village under the Forest–the directors are, at least, of South African origin.

Two Men and a Wedding is slightly mistitled; it should perhaps be Two Men and an Engagement, because the wedding never happens, but I suppose that's not quite as catchy. It's the story of Tiwonge Chimbalanga and Steve Monjeza, Malawian men who made headlines in 2009 when they threw an engagement party for themselves, got arrested by the police, were put on trial under venerable colonial sodomy laws, were sentenced (in 2010) to 14 years' hard labour, and finally pardoned by Malawi's then-president, Bingu wa Mutharika, after an appeal by the United Nations's Ban Ki-moon and threats of the withdrawal of donor funds to Malawi, 40% of whose gross domestic product is donated.

This is a fascinating tale, especially for the way it uncovers the attitudes of family members and other ordinary Malawians and sets them beside the views of human-rights campaigners and lawyers. The footage of Chimbalanga herself ("I consider myself a woman") is quite special; the rest, combined of talking heads and news footage, is compellingly put together to take the viewer all the way to the story's ambivalent conclusion.

The personal histories of these two troublesome people are touching; weirdly, they both lost their mothers at an early age, and were "troubled" before they were troublesome. One at least went through the bewitchment stage of a traditional African society dealing with homosexuality, and the line taken by local Christian groups is shown in all its odd ambiguity (Chimbalanga was a prominent member of a women's church group for some time).

The way Mutharika himself played with the gay thing as a political counter is very interesting. In the film, he proudly says he's outwitted the Western donors (by pardoning the gay pair) and then parodies Chimbalanga's flouncy behaviour, in riotously homophobic style. On another occasion, he speaks of same-sex sexual practices as "foreign things", and this at a Christian ceremony, nogal–the ordination of a bishop.

Talking about foreign things, when are African leaders going to start calling for Christianity to be criminalised in Africa? It really is time that this pernicious Western indoctrination ended.

Indoctrination is the issue in The Village under the Forest, which is written and narrated by Grunebaum, making it a personalised kind of political-historical documentary. She's a South African Jew who, in the film, visits a forest area in Israel, one for the planting of which she raised money as a child in South Africa. But what she is there to discover is the Palestinian village–Lubya or Lubiya–that was erased in 1948 during Israel's foundational war.

The documentary has testimony from a man who was an Israeli soldier at the time, telling how he and others systematically destroyed the village, from which the Israeli army had finally driven its Palestinian inhabitants. It has a staunch old South African woman who raised funds here for Israel even in 1947, and it also has the commentary of important historians Ilan Pappe and Avi Shlaim, who explain the context of the war and the situation in which the expulsions of Palestinians from the Galilee happened.

For Grunebaum, the story of how she discovered what was really going on in the apartheid South Africa in which she grew up, and the truth behind the Zionist line she had been fed as a child, are intertwined. "I found myself questioning both," she says, followed by a portentous piano chord.

For me, the film is rather over-narrated, as well as over-musicked–do we really need poignant flute or piano every time we are told about a dispossession, say? Truly moving material, such as that of the old Palestinian man who goes by tractor to pray each day at Lubya, has no need of sentimental augmentation–and that is where the film's heart really is.

The TriContinental Human Rights Film festival is on at Cinema Nouveau theatres in Rosebank, and The Bioscope at Arts on Main, Johannesburg (September 13 to 22), and Brooklyn Nouveau, in Pretoria (September 20 to 29), and the V&A Waterfront, Cape Town (September 20 to 29). For more information, go to tcff.org.za