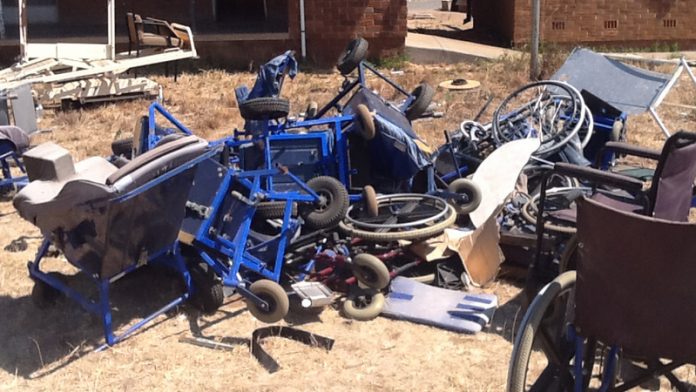 The Democratic Alliance (DA) has been accused of playing dirty ahead of the 2014 national elections after they called a Limpopo hospital assets unit a dumping site.

The DA accused the department of health in Limpopo of dumping semi-functional medical equipment that includes beds, baby incubators and wheelchairs, while patients in the province slept on hospital floors.

"The equipment appears to have minor defects and in some cases appeared to be in perfectly good shape. We have reason to believe that the medical equipment has been lying there for more than a year without being repaired," said Jacques Smalle, DA provincial leader in Limpopo.

Smalle claims their oversight visit to the Polokwane provincial hospital on Thursday was prompted by a tip-off from a former MEC of health in the province.

However, the ANC has laughed off the claim and expressed concern of what they call "dirty tricks by the opposition ahead of elections".

According to Adele van der Linde, spokesperson for health in the province, Smalle and his team visited the assets unit of the hospital where equipment is stored to either be repaired of disposed.

"We do not have dumping sites at hospitals. That equipment is received from various hospitals and is waiting for assessment of whether it can be repaired or disposed. Asset disposal is a very long process which leads to equipment piling up and exceeding the space we have allocated," she explained.

But the DA is adamant that if government equipment is left in corridors and courtyards exposed to weather and stored in a manner that may lead to further damage.

At Polokwane hospital, they demanded to see the inventory indoor premises, an asset register and service plans.

"The DA cannot pitch up unannounced and expect hospital chief executives to jump to their service. Proper appointments need to be made so they can be furnished with the necessary documents," said Van der Linde.

At Mookgophong Health Centre they found that the only two incubators at the facility were not working, with premature babies being transferred to a hospital 55km away.

"This situation borders on utter callousness for the patients who use these public facilities. According to our sources, nurses are sometimes forced to bring their own food in order to feed patients because there was also a shortage of food supply in this hospital," claims Desiree van der Walt, DA Limpopo legislature caucus leader.

The opposition is launching a province wide investigation into over 18 hospitals to assess their state in relation to equipment and shortages.

They will then compile a dossier which they will present at a planned meeting with health MEC Dipuo Letsatsi Duba.

"We suspect that many other Limpopo hospitals are involved in the practice of dumping perfectly repairable medical equipment," said Smalle.

Ongoing crises
Last year, the Mail & Guardian visited five public hospitals in the province and was shocked by the situation, which seems to have deteriorated despite state intervention.

The team found rotting limbs and the reuse of discarded medical items.

The radiology departments of some hospitals were found to be not functioning, which meant doctors could not perform orthopaedic surgery.

In some cases, the shortage of necessities resulted in hospital employees dipping into their own pockets to replenish supplies.

At Polokwane Hospital, they discovered that no surgeries were being performed because the oxygen supplies had been contaminated.

The department of health in the province was placed under administration in 2011 owing to poor governance and financial mismanagement.

A few months after that, the department released a progress report that claimed that the major problem remained the lack of funding.

Although the national health department made further allocations, these were not sufficient to meet the entire mandate, and the provincial department had been forced to prioritise those issues that it considered "non-negotiable", which included patient nutrition, blood, laboratory services and other essentials.

There was a shortage of drugs, exacerbated by a national shortage, and of ambulance services.

Last week, public protector Thuli Madonsela released a report showing that policy gaps, management inefficiencies, administrative problems, fragmented decision-making and aging infrastructure were some of the challenges that may be undermining efforts to improve the country's public health system.

In a visit to Limpopo hospitals last year, she discovered that they had reached crisis levels.

Madonsela witnessed first-hand the lack of essentials such as X-ray machines at hospitals such as Tshilidzini, where staff members borrow equipment from nearby facilities.

Accused of theft
The DA, in what they call an intervention, attempted to remove the equipment to ensure that it was repaired but they were barred from salvaging the equipment.

Van der Linde called this a criminal act that should not be taken lightly.

"They cannot just ambush our security and confiscate government property without going through us. We are very unhappy with the conduct of the DA which has been a complete disregard of rules," lamented Van der Linde.

She welcomed the approach of investigating the matter and compiling a proper document that could be discussed formally.

"It is better than ambushing us like raging bulls," she said.

Past catches up with ‘candy store’ doctor