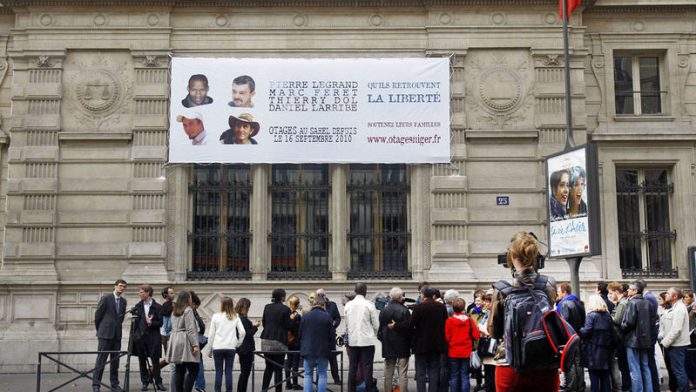 The video – purportedly released by al-Qaeda in the Islamic Maghreb (AQIM) to Mauritania's Agence Nouakchott Informations (ANI) news agency – shows four Frenchmen, a Dutchman, a Swede and a South African who were kidnapped in Mali and Niger and have been held for up to three years, according to US monitoring service SITE.

ANI says on its website that the hostages appear to be in good health, with neat beards and draped in Tuareg caftans. In the video, the hostages urge their families and governments to negotiate their release. The video's release was timed to coincide with the three-year anniversary of the abduction and detention of the French hostages.

The French foreign ministry believes the video is credible, according to the UK's BBC News.

"Based on an initial analysis, the video seems credible to us and provides new proof of life of the four French hostages kidnapped in Arlit [northern Niger] on 16 September 2010," said French foreign ministry spokesperson Philippe Lalliot on Monday.

It is not clear when the video was made, but ANI says the messages recorded by the French hostages are dated June 27 2013.

It says this is the first video to show the men since France sent troops to Mali in January.

iAfrica reports that there is nothing in the eight minutes and 42 seconds of footage to show whether the seven hostages were filmed at the same location, but that there are statements from all seven hostages.

Kenya said it invaded Somalia to protect its citizens, but the attack in Nairobi this week shows this has failed
Read more
Advertising