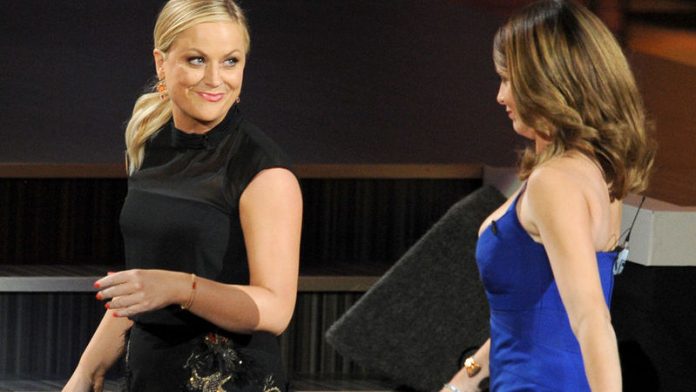 Sunday night's Emmy awards featured a bit of everything for everyone. There was a sobering tribute to deceased Glee star Cory Monteith by co-star Jane Lynch as well as what is being touted as the "best speech ever" by Merritt Wever, the winner for the Outstanding Supporting Actress in a Comedy Series.

The 65th Primetime Emmys were hosted by Neil Patrick Harris, who minutes after his song and dance opening had the limelight stolen from him by actors and writers Tina Fey and Amy Poehler.

The comedians sat in the front row and – in a throw-back to their popular stint as hosts of the Golden Globes earlier this year – beckoned Harris to take his pants off and "work-the-twerk". The two added that twerking was the only reason they attend award shows.

It's hard to beat an act like this pair, even if they were just a side show. But in a surprising move, Wever managed to do just that.

After being awarded the first Emmy of the night for her role on Nurse Jackie, a surprised Wever took to the podium and delivered a short acceptance speech (click on the video in the Brickflow below to watch it). Host Patrick Harris even followed that up with the " … best speech ever, good luck to everyone else".

In other Emmy news, Breaking Bad cleaned up good and took home the award for Best Drama Series, while Netflix made history and became the first online video distributor to win at the event. Netflix won the Best Director award for its political drama House of Cards. Everyone's favourite Modern Family (see what I did there?) won the award for Best Comedy Series for the fourth year in a row and Homeland's Claire Danes grabbed the Best Actress in a Drama Series accolade without that "ugly cry" at the podium.

Jim Parsons of the Big Bang Theory scooped the award for Lead Actor in a Comedy Series. John Hamm didn't take home an award for Mad Men, but in a suit like that, he stays winning in my eyes.

Click on the below Brickflow for a roundup of Sunday night's fun.

Thuso Mbedu: A kaleidoscope of dreams

Tina Fey and Amy Poehler slay Cosby at the #GoldenGlobes