From Fugard to the future with James Ngcobo 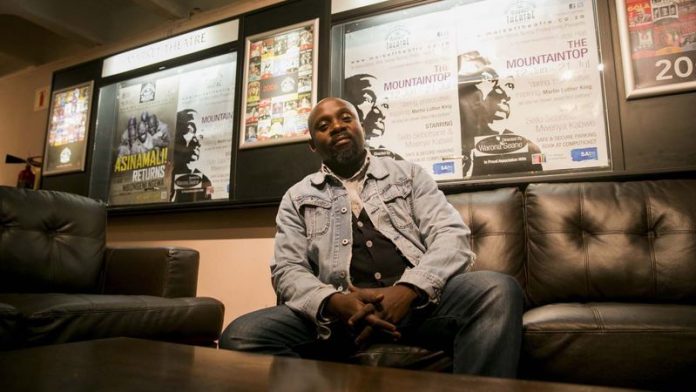 Athol Fugard's second play will be James Ngcobo's first in his new role as artistic director of the Market Theatre.

Ngcobo said he was aware that there was "a lot of administration work that comes with the position of artistic director", yet he did not want to be "that guy stuck behind a desk, because it will stifle creativity". He said he wanted to "be hands-on about what we curate in our own theatre" and in the laboratory ­theatre school.

Ngcobo also said he intended to maintain the Market's continental and international connections. "We need to embrace [the fact] that we are on the continent."

If there is one South African director who is always casting his eyes over the Limpopo, it's him.

Over the years, he has directed African classics such as Sundiata, a Malian epic, and The Lion and the Jewel by Nigerian Nobel laureate Wole Soyinka. Next year, Ngcobo plans to stage another Soyinka classic, Death and the King's  Horseman.

Encouraging diversity
Ngcobo is not just about continental classics as he has directed several South African stories, including other Fugard dramas such as Master Harold and the Boys, Boesman and Lena, The Suitcase by Es'kia Mphahlele and The Hill by Zakes Mda.

In an interview at a rehearsal room in Braamfontein, I pointed out to him that, to the casual observer, the classics are on stage ad infinitum. Is it because our best writing is in the past? "We have the [writers]," he said, listing Mandla Mbothwe, Paul Grootbroom, Nick Warren, Thando Doni and Greg Viljoen.

About Mbothwe, he said: "He isn't just brave as a writer, but [also] as director and curator. Jo'burg hasn't seen much of his stuff, but he's a terrific theatre-maker."

Ngcobo pointed out that diversity should be encouraged: "We need to start [coming to terms] with the idea that some of the great plays that will come out won't be in English. We need to start writing in our native tongues, and there are writers who are doing that."

Some amazing talent is incubating at the Market Theatre's laboratory and it is a priority for Ngcobo. "We want to go back to the vision of Barney Simon, who started the lab."  He speaks of "an overhaul of the system", including questions such as: "Who teaches at the lab? What kind of relationships [do] they have with the students, with the Market ­Theatre itself? It can't just be that you graduate, goodbye, and then another bunch arrives.

The laboratory used to be housed in the neighbourhood of its parent body, the Market Theatre, on Bree Street. Now, it is somewhat orphaned in its new home on ­President Street, as the construction of a mall and offices gathers pace in the theatre precinct's vicinity. By the middle of next year, the mall taking shape behind the Market will be complete.

Solid defence
But, as I am about to start quibbling about whether Johannesburg needs yet another mall, Ngcobo erects a solid defence: "The moment you look at the mall as a problem, you have lost the plot. This thing of theatre [standing apart from general life] needs to change.  Theatre needs to be visible in life. We need to market at the mall, to bring in the people who go to the mall."

But segueing to the play, Ngcobo said that his production was not a "photostat copy" of the Fugard ­original.

"We are not sitting in a rehearsal trying to make the best production of Nongogo ever made. We are trying to tell that story truthfully and honestly. We can't control whether people like it or not, but we can control how we tell it."

Ngcobo's production ran at the Soweto Theatre as part of Arts Alive at the beginning of September. It is a moving story that explores the themes of redemption and relationships, in other words, life and love.

At its centre is Queenie ­(Mbangeni), a dreamy shebeen monarch who watches over her liquor kingdom with a scrupulous intensity before a chance meeting with a loveable and do-it-yourself type of man makes her reconsider her career and life, where she has been and where she wants to go.

She is supported by Mokoena, who plays the part of a philosopher-pimp.

He goes about life as if he has not quite decided whether he wants to frown, grin or smile, or do all of these things at the same time.

Mokoena battles it out with Desmond Dube, who mixes versatility and a streetwise vim to play the part of the hunchback enforcer with a remarkable facility.

Dlamini, drooling and hooked on drink, finishes off the cast. He is the perfect impersonation of a wreck.

Nongogo is a mix of mirth and sadness, hope and impediment. Even though the action on the stage could be compared with a controlled explosion, some shrapnel manages to hit the audience in various and moving ways.

Nongogo opens at the Market Theatre on 11 October