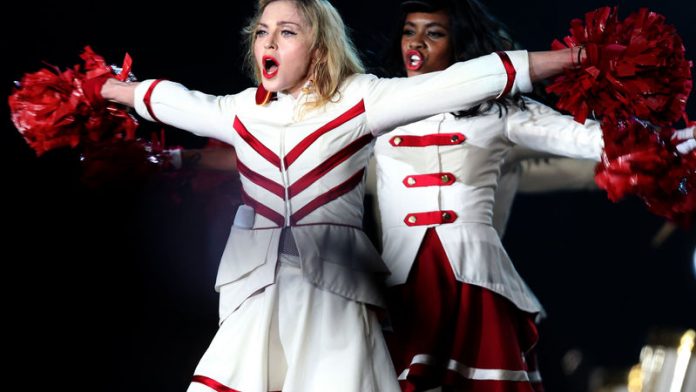 US pop icon Madonna was raped at knifepoint in her early days as a struggling artist trying to make it in New York.

The 55-year-old  also recalled being held up at gunpoint and having her seedy apartment burgled three times, saying she was "scared shitless" at times before she started making it as a singer and dancer.

In a piece for Harper's Bazaar, she also talked about her time living in Britain married to director Guy Ritchie, saying there is "nothing more beautiful than the English countryside," and revealed that she is now studying the Koran.

Describing her arrival in the Big Apple from the Midwest, where she grew up, she wrote: "New York wasn't everything I thought it would be. It did not welcome me with open arms," and described "paying my rent by posing nude for art classes, staring at people staring at me naked."

"The first year, I was held up at gunpoint. Raped on the roof of a building I was dragged up to with a knife in my back, and had my apartment broken into three times. I don't know why; I had nothing of value after they took my radio the first time.

"The tall buildings and the massive scale of New York took my breath away. The sizzling-hot sidewalks and the noise of the traffic and the electricity of the people rushing by me on the streets was a shock to my neurotransmitters," she added.

Freaked out
She continued: "I felt like I had plugged into another universe. I felt like a warrior plunging my way through the crowds to survive. Blood pumping through my veins, I was poised for survival.

"But I was also scared shitless and freaked out by the smell of piss and vomit everywhere, especially in the entryway of my third-floor walk-up."

The Material Girl singer, whose career has ranged from Like a Virgin to movie roles, the 1992 coffee table book Sex and who last toured in 2012, wrote the cover story to accompany a fashion photoshoot of her in typically provocative gear, including a bondage-style mask and a sword.

Moving on a decade a time, she recalled being a pop star in her 20s, embracing Kabbalah in her 30s, before marrying Ritchie and moving to Britain by the age of 45.

Madonna and Ritchie were divorced in 2008, and a decade later she is back in New York.

"I have started making films, which is probably the most challenging and rewarding thing I have ever done. I am building schools for girls in Islamic countries and studying the Koran. I think it is important to study all the holy books.

"As my friend Yaman always tells me, a good Muslim is a good Jew, and a good Jew is a good Christian, and so forth. I couldn't agree more." – Sapa-AFP

Voluntourism: What’s wrong with it and how it can be changed

Madonna’s cultural appropriation confirms what a cliche she has become