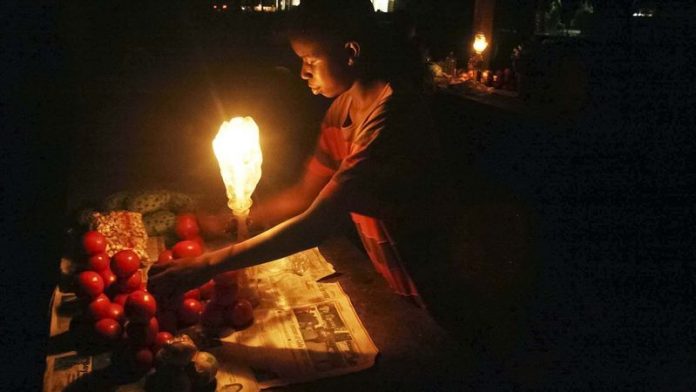 Above the din outside the Irie Vibes stall at the Fourth Street bus rank in Harare, Rastafarian and artist Marko Abraham is explaining how power cuts are good for business.

"The people who use this rank come from suburbs without power, so they leave their phones here while they go into town," says Abraham, shouting above the din of his generator and the Burning Spear song coming from his speakers. He makes "at least 100 bucks a day" from charging phones, he says.

By Tuesday this week, he said it had been four straight days without a power cut, which made him nervous.

"If there is uninterrupted power in your area, please report the fault immediately," goes the joke from Zimbabwean social media.

Since the week after the elections, power cuts have become a daily occurrence in the country. The Zimbabwe Electricity Supply Authority (Zesa), has warned that the country faces the worst power crisis in years, and that it will take a long time to solve the problem.

"We urge consumers to use the available power sparingly," said a Zesa notice in a newspaper recently.

Power cuts
As the power cuts bite, and with Zesa saying it will take years and billions of dollars to bring everything back to normal, Zimbabweans have had to make painful adjustments.

The kerosene stove, the gas stove and the Chinese-made gel stove are becoming all the rage. Outside many homes, solar lamps line the walls, taking in and storing the sunlight ahead of nightfall.

But as soon as the power is back on, the scramble begins; quick – boil that water and put it in the flask, iron that pile of clothes, warm that food, charge the phones.

According to Zesa, the solution lies in the building of new power stations and in the expansion of its existing, obsolete plants.

Zimbabwe has five power stations, all of which are old and incapable of meeting demand.

Zimbabwe's power demand stands at 2 200MW, but generation is at less than 1 200MW. There are big long-term projects planned – the expansion of the two main power plants at Hwange and Kariba, a new project is being planned jointly with Zambia on the Zambezi River, and two Chinese-funded projects are being explored in the north of the country.

No real investment
But none of this has translated into real investment. Three years ago, RioZim said it would partner Rio Tinto, its former parent, in a $3-billion coal-powered plant at Sengwa in central Zimbabwe that would produce its first electricity by 2014.

But state bureaucracy has kept that project on the drawing board.

Isolated by much of the Western world, Zimbabwe has been unable to get significant international finance to invest in electricity.

Decades ago, gas was found in Lupane and the Zimbabwe Power Company (ZPC), which is responsible for power infrastructure, plans to build a $580-million plant there.

The plant, according to the ZPC, would take at least 36 months to build once exploration had been completed.

But the area has been overrun by dozens of mining houses, many of which are politically connected, and conservationists are opposed to mining so close to the Hwange Game Reserve.

New hydro plant
There is also a plan to build a new hydro plant on the Gairezi River in eastern Zimbabwe at a cost of $90-million.

Josh Chifamba, chief executive of Zesa, says: "In the current circumstances that we are in, where we have no access to long-term capital due to sanctions, it is difficult and almost impossible to invest in new generation capacity."

Imports are not enough to cover the shortfall and the only source is Hidroelectrica de Cahora Bassa of Mozambique, but that supplies an inconsistent 200MW at a time.

President Robert Mugabe chose Dzikamai Mavhaire to be the new energy minister. Mavhaire said his appointment was a "reward" for delivering Masvingo – which had become an opposition stronghold – back to Zanu-PF.

Electricity emerged as the top concern of 250 companies polled by the Confederation of Zimbabwe Industries, Zimbabwe's biggest industry body.

"It is very bad we are running generators the whole day, and this obviously comes with exorbitant operational costs," said the body's president, Charles Msipa.

This debt should be deemed a subsidy, an external cost that the government must bear for inadequate service delivery.
Read more
Business