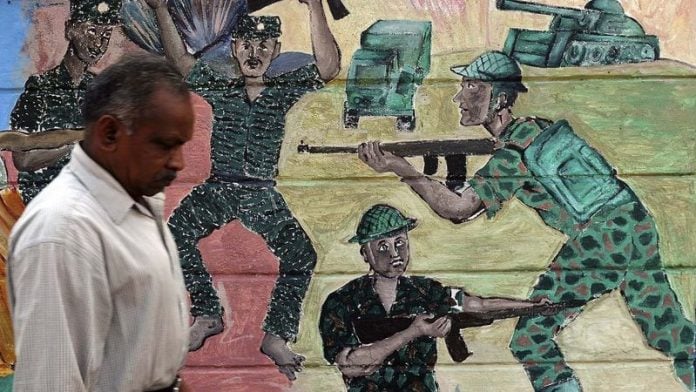 In a stand of scruffy palms a few metres from a dirt track, two brothers are building their third house in less than a ­decade. They hope it will last longer than the others. They do not want to be identified for fear of security agencies, but their story is a common one in Kilinochchi, a small town in northern Sri Lanka, once the capital of the de facto state run by the separatist Liberation Tigers of Tamil Eelam (Tamil Tigers).

All over the north of Sri Lanka, men are building. In Kilinochchi, more than four years after the Tamil Tigers were routed by the Sri Lankan army, there are new banks, ATMs, shops, street lighting, an internet café and a station that still smells of fresh paint. Trains run three times a day to Colombo, 322km to the south. A large sports complex is taking shape alongside the widened road.

But for the two brothers – a third was a Tamil Tiger fighter killed in the bloody final days of the war – none of this is progress. "Before, it was safe for women, now it isn't … Before, we could talk freely, now we can't," one said. "OK, so there is some development, but this is not real freedom … this is not true peace."

Such sentiments are as widespread as the construction across much of the north, an area dominated by people from the Tamil minority.

As British Prime Minister David Cameron and other leaders prepare to travel to the Commonwealth Heads of Government meeting in Sri Lanka in November, the question of what real peace might look like and how it might be achieved looms ever larger.

The choice of Sri Lanka as the summit venue has been controversial. The hosts face criticism for failing to investigate alleged war crimes by the military, a force dominated by the Sinhalese majority, at the end of the war against the Tamil Tigers and for what campaigners claim is systematic intimidation of opponents.

There is also concern about the government's limited efforts to reach genuine political reconciliation with the Tamils. British officials have said that Cameron believes a strong message to Colombo is best transmitted personally. But Canadian Prime Minister Stephen Harper is staying away.

Paikiasothy Saravanamuttu, an analyst and activist in Colombo, said the summit would consolidate the regime: "It will be able to say to the world and at home: look, 50 countries have come … we are not pariahs."

However, some say it was international pressure that convinced a reluctant President Mahinda Rajapaksa, in his eighth year in power and still hugely popular among the Sinhalese majority, that elections for a provincial council in the north, the first for 25 years, should go ahead in late September.

The results underlined how development since the end of the civil war had done little to weaken the demand for greater autonomy. Despite what Commonwealth observers described as intimidation by the army, omnipresent in the north, and the misuse of state resources, the Tamil National Alliance, once a proxy for the Tamil Tigers, won 30 out of 38 seats.

Basil Rajapaksa, the president's brother, blamed voters for thinking with "their hearts and not their heads".

Rajapaksa's United People's Freedom Alliance holds power in all other eight provinces. The president has opposed moves to grant greater autonomy anywhere, let alone to the north. Instead, he is banking on economic growth and development to convince Tamils to stop "playing the ethnic card", to quote a United People's Freedom Alliance politician in Jaffna.

Few doubt there has been an economic boom. More than twice as many new vehicles were registered in the north in 2011, the last year for which statistics have been released, than were on the roads in 2009. There are also at least twice as many cattle and thousands of acres of agricultural land, which fell into disuse during the conflict, have been cleared. Many people, including the two brothers building their home in Kilinochchi, work as labourers on construction sites.

Conditions for the hundreds of thousands of people displaced by the fighting have improved, albeit from a very low base. A survey earlier this year by the United Nations High Commissioner for Refugees revealed that 63% of recently resettled families had access to a toilet and only one in 25 had to walk more than 500m to find water. More than 160 schools that were closed during the war are now open.

But progress is patchy. Up to half of respondents in some areas said they had insufficient food and, by some measures, things are worse than before. If the rates of infant or maternal mortality in parts of the north have improved, in others they have risen, official statistics reveal.

And much of the growth has been spurred by loans, or foreign aid. "Debt has soared and there are many who can't pay back what they've borrowed," said Ahilan Kadirgamar, an economic analyst in Jaffna.

One debtor is Sanmugam Sivalingam, who borrowed 465 000 rupees (about R35 000) to buy a rickshaw 18 months ago. Waiting at the new train station in Kilinochchi, he said he made only 700 rupees (R56) on a good day and, with monthly repayments of R1 600, he often went hungry.

The government is also banking on war weariness among the northern Tamils to buy time for its strategy to buy off separatist sentiment with development. Though few in the north admit it, there was deep disaffection with the Tigers at the end of the conflict. Forced conscription of one man – or often woman – per household disillusioned even the most loyal. Witnesses describe how thousands of Tiger cadres threw away their weapons and joined civilians.

Now, however, there is a growing nostalgia for the Tigers, said a veteran Tamil rights activist in Jaffna. "The war should have ended six months before it did with thousands of lives saved. There was nothing heroic about the final days, but that is the legend now being spread. It is an insult to all those who died," he said, on condition of anonymity.

Rhetoric during the campaign for last month's poll recalled an earlier era, observers say, with talk of the "martyrs" and praise for Velupillai Prabhakaran, the dead leader of the Tamil Tigers, who was responsible for many murders of Tamils as well as Sinhalese as "a resistance leader".

For people like Ananthi Sasi­tharan, the war may have been lost, but the struggle, as the newly elected provincial councillor calls it, is far from over. Her husband was a Tamil Tiger leader and among the hundreds, possibly thousands, who went missing after surrendering at the end of the war in May 2009 and who, campaigners say, were summarily executed by soldiers.

Sasi­tharan entered politics to find out what happened to him. "I am not alone. Many are searching for ­[their] husbands. We do not want another armed struggle. We have suffered very much from the war. But during the Tamil Tiger time [in power] we had a very happy life. So the political struggle must go on."

Tamil politicians admit that their position is weak. The newly elected provincial council has few powers and the government has shown little sensitivity towards Tamil demands that their cultural identity should be respected.

The military presence is heavy, though its Jaffna-based local commander insists the number of troops in the north is smaller than claimed, and the large war memorials trumpeting the victory of "hero soldiers" over the "terrorists" make few concessions to local sentiment. Much land remains under military control.

In Kilinochchi, a water tower felled by the Tamil Tigers as they fled the town has been turned into a neat tourist site, with a souvenir shop, postcards, orange ice lollipops and a plaque commemorating its opening by Namal Rajapaksa (27), the president's son and new minister for youth. Sinhalese tourists take photographs and pose with an army patrol. Many still see the Tamils as a threat.

"Terrorism is very bad. At any time it could come back again," said a government worker from Kandy, 282km to the south.

Waiting for the train at Kilinochchi station, Nirosha Inderavasan (39), a Sinhalese bank manager married to a Tamil, stressed how grateful she was to Rajapaksa for ending the conflict, though she "would not like to comment" on exactly what happened in its final days.

Jaffna was developing fast and its hospitality made up for its lack of nightlife, Inderavasan said.

But councillor Sasitharan said the sight of the tourists made her very angry. "They destroyed our beautiful country. They eliminated our society and erected victory monuments in our land and now they are coming to enjoy our destruction," she said. "We are a people changed by war. There is no healing." – © Guardian News & Media 2013