The fear and fury of the mothers of Diepsloot 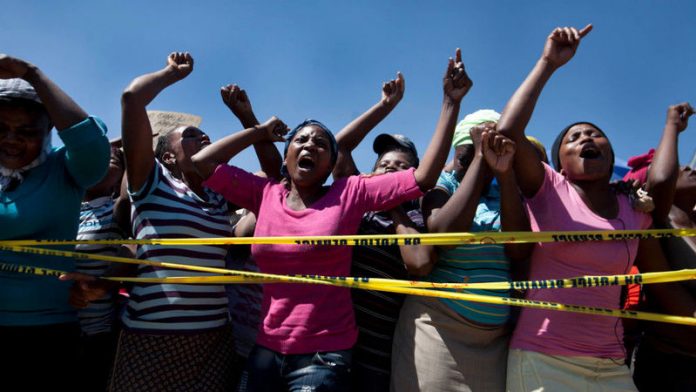 Mirriam* and Julia* are huddled in the shade of a closed spaza shop. Julia’s three-year-old daughter is strapped to her back. Down the road a police nyala clears the road of an overturned dumpster, a remnant of Tuesday morning's protest. Julia's child will soon return to Limpopo because she cannot afford to pay someone to watch her, and now there is a child-killer and rapist on the loose.

"What is happening to our children here? They are not safe anywhere. It’s fucked up," Julia says.

The two women spend about four months out of every year in Diepsloot to see their boyfriends, and the rest of the year is spent in Limpopo. Julia found it difficult adapting to living in Diepsloot, saying that to communicate you need to understand four or even five different languages, or at least know some willing translators. However, it is where her child's father lives, so she got used to it. But now her daughter may not come here as often.

"Look at our mkhukhu [informal houses]. There are no locks on the gates. Some of us don’t even have gates and there are no RDP houses in extension one," Mirriam says.

On Saturday a group of men from the community began a manhunt for two children, aged two and three, who went missing from their parents' homes. Three days later the children were found allegedly raped, murdered, and dumped in a portaloo in extension one. A month earlier a dead child was found in a dumpster about 50km from her home in Diepsloot. Now Mirriam and Julia join the hundreds of men and women marching the streets of extension one, furious that a killer is still at large.

Their intent is two-fold – mainly, it is an expression of their grief, fear and frustration that the police did not find these children before it was too late. But it is also about finding the killers and sending a strong message to them that their days in Diepsloot are numbered.

That almost every woman in the crowd has a child strapped to her back is both symbolic and practical: "We are mothers and you cannot have our children," they seem to say. But there is also the very real problem faced by mothers who want to be part of the protest but cannot bear to leave their children unattended when a killer could still be living among them.

As the day wears on, spurts of tyre-burning or stone-throwing flare up, only to die down as quickly as they started.

"You see those ones with the berets?" says a man, pointing to the police’s Tactical Response Team unit that has been out in full force. "They will be gone by tonight, and then you will see." He laughs, wryly.

Mirriam explains that the police are visible in Diepsloot, but mostly along the main roads. She believes they do not penetrate the windy sidestreets enough. Like Sekhukhune Street, where one of the deceased children used to live.

'Out, out!"
In a flash Mirriam and Julia are on their feet, as hundreds of protesters pass by. They are going to the local police station, a temporary home for the police in the area because the actual police station is still under construction. En route a construction site is looted, signage overturned and stones thrown in the street. Outside the police station women shout "out, out!" as their hands wave in the air.

This is because a rumour is doing the rounds: a Diepsloot couple allegedly killed their four-month-old baby and drank his blood, ostensibly upon the advice of a "pastor" who said this would bring them wealth. Very few details about the couple are forthcoming from protesters, but as the rumour goes, the pair from extension four was taken into custody by the police on the same morning the bodies of the two little girls were discovered. Innocent or guilty, the timing could not be worse for the couple.

They do not emerge from the police station and the protest turns on its heel, back to extension one and the scene of the crime. There will be no stone-throwing on the return trip, and the police (now armed with rifles and ammunition belts of rubber bullets) have closed off traffic routes in and out of Diepsloot.

The crowd progresses down the main road. Construction workers look at the passing hundreds with irritation and wait patiently for the ruckus to pass. They are headed back to Sekhukhune Street where Gauteng Premier Nomvula Mokonyane is expected to make an appearance.

A journalist shouts into a cellphone that "there is a service delivery protest in Diepsloot", but the term does not do this crowd justice. There is no man with a loudspeaker and no clearly discernible crowd leader. There are no political songs to be sung or labelled T-shirts; no core group or evidence of prior preparation. The placards were penned that morning on cardboard boxes with ballpoint pens and pencils: "Stop raping our children, Diepsloot!" It seems organic, spontaneous and free from political affiliation – the protest belongs to no one but those who make up its form.

'Foreigner'
From the outside, the Diepsloot protest is unadulterated, unbridled community unrest in its purest and most effective iteration. It is sincere. Nevertheless, actions of this sort are not readily divorced from Diepsloot’s myriad problems, and the protest does not need hijacking for it to be peppered with the nastiness of xenophobia.

"Foreigner" is a word that is not prompted by this journalist, but is used readily by protesters. Perhaps in the same way that "strike" is used to explain what’s going on here, "foreigner" is used too hastily in these parts. And those who are labelled as such are alive to the weight of the word.

As the first fist was raised into the air on Tuesday morning, so the first foreign-owned spaza shop shut its doors. One by one the shops closed down, until Extension One was lined with visibly uncomfortable shop-owners watching the unrest build.

In the two weeks preceding the murder of the children, a taxi drivers’ strike broke out, with reported undertones of xenophobia. Mirriam says a "foreigner", a driver, was killed in his taxi and that the taxis did not operate on Sunday night because the drivers, most of whom she perceives to be foreigners, did not feel safe.

An onlooker, a man who helped in the search for the missing children, suspects it was a foreigner who did it but has no evidence to prove it.

"All Saturday and Sunday we searched. On Monday, too. The mkhukhu, the river, the shops, the veld. We looked everywhere, but we didn't find them," he said.

A monster on the loose
Thumeka Fumuzele is a mother of two, a five-year-old and 18-year-old daughter. She believes the team of community members could have found the children if they'd had more manpower.

"The police were there, searching, but not like this," she says, pointing to the 20-odd caravan of police from as far off as Honeydew and Pretoria stations.

Her son is on her back, although he is perfectly capable of walking on his own, and he weighs heavily on Thumeka's form in the unforgiving midday heat. But today there is a monster on the loose, and even Andisiwe, her teenage daughter, must stay close to her skirt.

"We carry our children on our backs today because they have not arrested that monster," she says.

Andisiwe finished matric last year and stays at home with her baby brother, while her mother works as a domestic worker in the city. Their father is a construction worker who spends long hours away from home. When Andisiwe cannot babysit her grandmother takes over. But Thumeka worries that this system may not be enough.

"I can't watch them all the time. I can't have my child on my back when I’m working, when I'm cooking, when I'm cleaning. I'll have to hire someone to watch him full-time," she says.

Nelly Motshwene's toddler already attends playschool, but like Thumeka, she cannot watch him all the time. Nelly has two children, 12 and three years old, who attend primary school and crèche respectively. But Nelly is a cashier in Woodmead, and sometimes has to work on weekends. Her husband usually comes home from Germiston on weekends, but this will have to become a more cemented routine from now on.

"I can’t even leave my children with a neighbour. To be honest, I don't trust anyone anymore. Their father will have to come home more," she says.

For Julia and her child, the problem remains as the protest subsides on Tuesday. They return to their mkhukhu, to whatever safety it still represents.