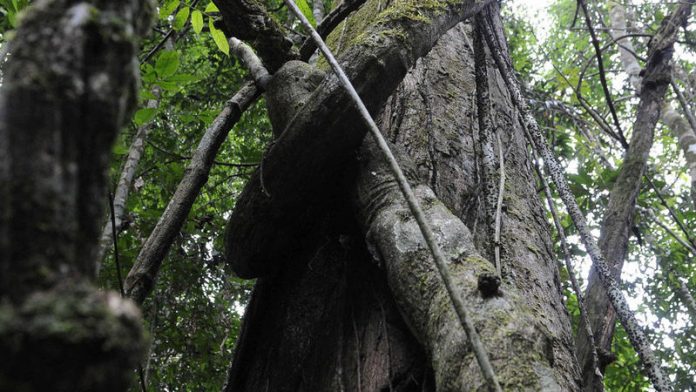 A purring monkey, a vegetarian piranha and a flame-patterned lizard are among more than 400 new species of animals and plants discovered in the past four years in the Amazon rainforest, say conservationists.

Scientists have discovered 441 new species – all new to science – in hundreds of expeditions between 2010 and 2013. They include 258 plants, 84 fish, 58 amphibians, 22 reptiles, 18 birds and one mammal. This tally does not include discoveries of insects and other invertebrates.

"The more scientists look, the more they find," said Damian Fleming, head of programmes for Brazil and the Amazon at WWF UK, which compiled the list. "With an average of two new species identified every week for the past four years, it's clear that the extraordinary Amazon remains one of the most important centres of global biodiversity."

Among the new species discovered is a "purring" Caqueta titi monkey (Callicebus caquetensis) of the Colombian Amazon, whose babies have an endearing trait: "All of the babies purr like cats," said scientist Thomas Defler, who helped discover the species. "When they feel content they purr towards each other, and the ones we raised would purr to us."

A "warpainted lizard" (Gonatodes timidus) was discovered in the part of the Amazon that extends into Guyana. Despite its extraordinary colouring, this lizard is extremely shy and has a tendency to avoid being seen by humans.

Already endangered
Some species may be lost just as they have been discovered, said scientists. The thumbnail-sized "thimble frog" has been given a Latin name (Allobates amissibilis) meaning "that may be lost", because it thrives in an area of Guyana that could soon be opened up to tourism.

Other species are under threat from development. The strictly herbivorous "vegetarian piranha" (Tometes camunani) inhabits rocky rapids in the Brazilian Amazon where its main source of food, Podostemaceae aquatic herbs, is found. But dam projects and mining activity in Pará state are threatening the health and flow of its river habitat.

Many of the recently discovered plants and animals have restricted ranges and are thought to be endemic to small parts of the Amazon. For example, a new fish species (Apistogramma cinilabra) that has adapted to water with low oxygen levels is unique to one small lake in the Loreto region of Peru and found nowhere else in the world – making it and other species even more vulnerable.

"The richness of the Amazon's forests and freshwater habitats continues to amaze the world," said Fleming. "But these same habitats are under growing threat. The discovery of these new species reaffirms the importance of stepping up commitments to conserve and sustainably manage the unique biodiversity and also the goods and services provided by the rainforests to the people and businesses of the region."

Amazing Amazon
​The Amazon ecosystem is the world's largest tropical rainforest and river system, covering 17.4-million square kilometres shared by Brazil, Bolivia, Peru, Ecuador, Colombia, Venezuela, Guyana, Suriname and French Guiana. It is rich in biodiversity, containing one in 10 of the species known on Earth in 1.4-billion acres of dense forest and 6 600km of winding rivers.

A recent study found that almost 400-billion trees belonging to 16 000 different species grow in the Amazon.

Deforestation, intensive farming, climate change, natural resources extraction and hydropower are among the chief threats to the forest and freshwater ecosystems.

About one-fifth of the Amazon rainforest is already lost and deforestation is taking place at a rate of three football pitches a minute, WWF says.

Brazil has slowed the pace of forest clearance by 80% in the past eight years, but roughly 6 000 square kilometres is still converted to farmland each year.

The Amazon contains between 90-billion tonnes and 140-billion tonnes of carbon and the uncontrolled release of this carbon – through deforestation and land conversion – could accelerate global warming significantly. – © Guardian News and Media 2013

Large corporates whose business has thrived because of inequalities, could be hijacking the anti-racist movement by offering money and not tangible changes
Read more
Environment

As the world celebrates International Day for Biological Diversity, we should commit to ensuring the natural world has what it needs to survive
Read more
Opinion

Mister Sweet workers say they will not risk their health, and the lives of others, to continue producing and packaging confectionaries
Read more
Analysis

Western media has racialised the coronavirus outbreak, leading to increased Sinophobia in several countries. Such dehumanisation of a race has no place in functioning democracies
Read more
Environment