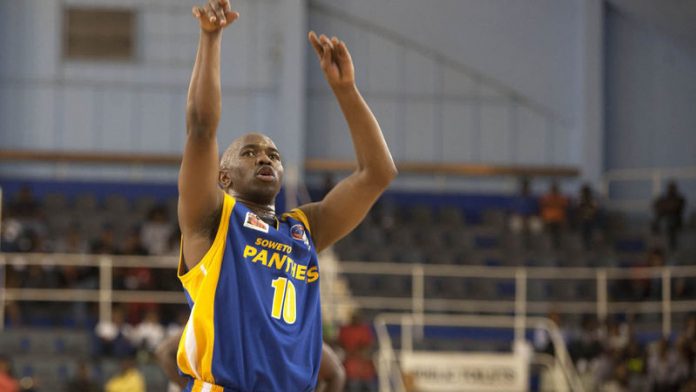 The opening game of the Basketball National League last weekend between the Soweto Panthers and the Marlins from KwaZulu-Natal was a scrappy, low-scoring affair, much like the league itself – which is in need of sponsors and currently runs on a shoestring budget.

In the game the Panthers built a commanding lead early on and more or less maintained it through the four 10-minute quarters. The Panthers looked more athletic, but both teams were rough around the edges.

"People were expecting more because of the calibre of the teams," said Cyril Shabalala, one of the Panthers' several national team alumni. Shabalala said the live broadcast by M-Net's SuperSport (a key to pulling public participation and sponsorship) may have added to the pressure on the players.

There were a few veterans on the court, like Marlins player Craig Gilchrist, who appeared to have a hard time keeping up with the more athletic Panthers.

Past his prime or not, Gilchrist said you cannot get him off a basketball court. "I've never stopped playing," he said. "If the youngsters are good enough to force me to retire then I'll quit. I have a passion for the sport that some people can't understand. Physically, I can't do some of the things that I used to do, but I can do others, and help the team."

From the stands, though, the atmosphere was infectious, despite some technical problems with the PA system. As the weekend pushed on, the players seemed to warm to the spotlight, with several close games and displays of proficiency.

World-standard
Wembley Stadium will be hallowed ground for starved basketball fans in Gauteng this summer. Located in southern Johannesburg's industrial heartland, the venue is unassuming, although, importantly, it features a world-standard hardwood court and regulation mobile hoops.

Explaining the use of a single venue, league chairperson Albert Mokoena said: "We needed the confidence of the federation [Basketball South Africa] and the sponsors so far are only Tsogo Sun and Supersport, so we're using one venue until the season ends on December 15."

Gilchrist believes a sustainable league changes everything for young players because most kids want to be professional in a sport they excel in.

"For the past 20 years there has been nothing for them. At varsity level most kids quit playing. I believe that if you take care of the league, grassroots development will take care of itself."

Gilchrist is well placed to make that statement. For more than a decade (from the late Nineties to 2006), he worked with current Marlins coach Myles Delport to run a transformative basketball programme at former Model C institution Durban High School, which saw it rise from middle of the range to developing a fearsome reputation in the province and the country.

"Back then it was thought that it was the negative element that played basketball," said Delport, referring to the numbers of talented township youths who thrived on the platform. "That programme gave something to the kids that showed interest and perceptions changed."

Moved on
Today, Delport and Gilchrist are tucked away in Kearsney College in the Midlands – a smaller, prestigious private school – trying to further their basketball legacy.

Reflecting on the standard of play during the first round of fixtures, in which the Marlins played twice (against the Soweto Panthers and the Cape Mountaineers), Delport said: "I wasn't expecting such a high standard. I thought we'd be better prepared. We haven't had such a high competitive standard in KwaZulu-Natal – we have fallen behind."

Delport said Johannesburg guys are playing more basketball. "Very few teams here [in KwaZulu-Natal] play a lot. There are lots of good guys who end up playing there [in Gauteng] because they're studying there and end up getting jobs there. The universities down here are just not the universities of choice."

He said the sport is still healthy at school level and is experiencing a revival at tertiary level. "Hopefully the BNL will kickstart all of that stuff."

A prime example of the problem Delport diagnoses is Shabalala. A product of the Model C school system in KwaZulu-Natal, where much of organised basketball was focused, Shabalala played provincial basketball for pretty much all of his high school career, which started in 1996. He went on to represent the country at national team level.

"I was lucky enough that when I started playing I was playing with the guys who were some of the best players in the country. These were older guys who were playing in the professional league at the time. At this time, the league was dissolving because of politics within the sport, so these were professional guys from overseas hanging around, hoping the league would pick up again."

Shabalala, who now earns a living as a procurement consultant in Gauteng, said he was among those who moved on with their lives, although he never stopped playing socially in the amateur leagues.

When it came to choosing a team, Soweto Panthers was an obvious choice for Shabalala because "the guys I played with in the amateur leagues were part of the Panthers set-up, so it was a natural choice, just from a comfort point of view".