Mali: Recovery is hampered by poverty and food insecurity 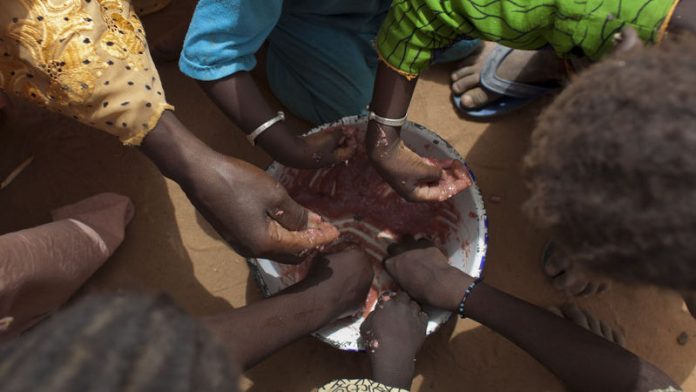 At the referral health centre in Gao, northern Mali, Halifatou Alousseini shares a recipe. The 20-year-old mother of three looks almost twice her age, a white headscarf framing a face that is weathered from life in the desert. She explains carefully how to make a nutritious porridge for children from local products such as beans, rice and millet.

The problem is, Alousseini says, she can't afford to buy the ingredients. "I know this would improve my children's nutrition, but I don't have the means to buy this kind of food for my family," she explains in Tamashek, the language of her Tuareg ethnic group. "Usually I feed my children rice. With no vegetables and no meat. It's all I can afford."

Alousseini – whose two youngest children are malnourished and are receiving sachets of Plumpy'nut at the centre from the World Food Programme and Action Contre la Faim – has a personal story that embodies much of the history of Mali's conflict. Driven from Gao long before the war by poverty and food shortages, she and her family moved to Benghazi in Libya, where her husband found work.

After the Gaddafi regime collapsed, Alousseini returned to Gao, but has since lost touch with her husband, for whose safety she fears, and has barely any income.

"My husband is away in Libya to find work, but since last March I have lost contact with him," Alousseini explains. "When the rebels took control of Gao, I was all alone with my children. I was scared, so we fled to Niger. We came back three months ago. I'm happy to be back, but things are not the same. There is no cohesion anymore."

The interlinked fortunes of the countries in the sparely populated Sahara region have played a complex role in the causes of Mali's conflict and also the coping strategies that people such as Alousseini have employed to survive.

The return to northern Mali of some armed groups from Libya was one of the sparks that ignited conflict in 2012. But now, ostracised by the community for their role in the events that led to a brutal jihadist takeover of towns such as Gao, many have fled, leaving households without breadwinners and the marketplace without crucial traders.

Insecurity has meant there are no up-to-date figures on the malnutrition rate in the region. But the latest available figures point to 15% in Gao, and in Burem – a district of the Gao region – it is as high as 17%.

A recent report by Oxfam found that breakdowns in community relations and the exit of Tuaregs and Arabs have severely affected trade. "A considerable number of [people in northern Mali] bemoaned the departure of key economic actors [Arab traders in particular], which caused serious shortages of imported products and price rises," the report said.

Flight and displacement have disrupted farming, livestock activities and trade, and the collapse of state institutions – only now beginning to reform in towns such as Gao – form a complex set of pressures on already vulnerable people.

"An emergency food security assessment shows that three out of four households living in northern regions of the country are food insecure and heavily dependent on assistance," said Alexandre Brecher, a World Food Programme spokesperson in Mali. "People in the north are spending between 85% and 90% of their income on food. About 1.3-million people will continue to need food assistance in 2013 and into 2014."

At the Chateau Thionville school in Gao, 11-year-old Achwadange Wallet Ackhou fiddles with the frayed fibres of a prayer mat as she tells of her struggles with hunger.

Although Achwadange's father, Achkou Ag Alhalias (60), is the school guard, and her mother, Hadeja Wallet Snahalane (53), is the school cook, the family is still short of money to buy food. Since the occupation of Gao ended, Alhalias has received none of his small salary of 15 000 West African francs a month (about R300).

"I wish I could eat all my meals at school," said Achwadange. "I eat breakfast and [lunch] there, but in the evenings I go without."

Head teacher Oumar Toure says the programme has had a dramatic impact on school attendance. "In just a few months, class sizes have doubled. Children come punctually in the mornings because they know they will have porridge, and we have far fewer absences." – © Guardian News & Media 2013