Gordimer and the secrecy Bill: Gag the mouth and block the ears 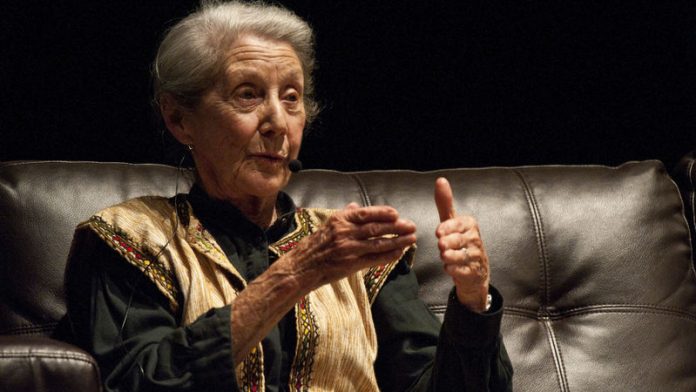 The pious charge that the press exaggerates the intention behind the Protection of State Information Bill is in itself a subtle form of censorship. Public affirmation and denial are vital issues, two pillars of democratic freedom. Anyone is free, constitutionally, to provide alternative facts or opinions of proposed or existing legislation.

So let us get this out of the way. There is no question that defence, military intelligence, cannot be allowed to be public knowledge. That would be a threat to our national security. This despite what is new, now common, which we cannot ignore: the nuclear capability of individual countries to destroy other countries, kill the inhabitants without any need of invasion by an army.

The press, both as newsprint and in the form of electronic media, is the obvious victim of censorship as the widest immediate source of information to everyone, daily, nightly, hourly online. No question about that, either. But the effect of censorship clampdown on the culture (yes, compound word) of the country’s literature – novels, short stories, plays and films, critical biographies and autobiographies of individuals intent on the social, political, financial, sexual dialogue of our life in South Africa – goes deeper. Even that is not the limit of censorship.

Although the visual art – of painters, sculptors – occasionally forcibly taken from their exhibition by public objectors now will in future be subject to blackout of forbidden images, this does not mean, as censor-supporters would have us believe, that the offended does not have access to charges against the offender.

Whistleblower
Among many other South Africans I have a stack of newspaper cuttings about the Protection of State Information Bill since it was first promulgated in 2010. Concurrently there has grown rampant corruption by individuals in government, finance and industry. The category of whistleblower includes the informant of the person who actually has exposed publicly the information thus obtained. He/she will be forced by law to reveal the specific source and the informer also will be charged under the Secrecy Bill-become-Act.

Second-thought cosmetic changes to the Bill have been made as concession to opposition. The Bill was adopted by parliamentarians in April this year and went to the president for his signature.

Whether it would be approved by the highest legal authority in our democratic republic, the Constitutional Court, in accordance with our founding document of freedom, the Constitution, still isn’t known. It hasn’t been taken to that court.

We have turned over the contesting opinions, deliberations, pushed to the back of our minds by unemployment, strikes, rising food prices. That is how immediate concerns distract from what threatens to deprive us of publicly outspoken facts, open expression that human consciousness demands in order to deal honestly with our world.

Fighting space
Joe Thloloe, director of the Press Council, emphasises “we still have a lot of fighting space until we get to the Constitutional Court”. Something we have to face actively, not let go by. There is offered as a lifebelt for justice that there should be at least a public interest defence clause built into the Bill.

We have to question: What is meant by Public Interest as a selective term? It is surely in the public interest that we must be aware of all that affects if not determines the circumstances of our communal life “that’s to be plainly said”.

Is it not in our “common interest” that the facts of corruption need to be public, from the multiple-million-rand instance of tenders for national facilities, schools, roads, housing, awarded by government ministers and duly empowered officials, all the way down the ladder of privilege to the traffic officer pocketing a bribe in exchange for tearing up a parking ticket?

The “culture” of freedom in our country: who is to define the area, decide the borders of “public interest”? The conception must go to the Constitutional Court for the ears of those who hear and have the mouths to speak for the justice still to fulfil in peace, entrenched in our Constitution, the suspended revolution.

Nadine Gordimer won the Nobel Prize for Literature in 1991. Het most recent novel is No Time Like the Present (Bloomsbury).

On our Lists this week: Noname, Mongane Wally Serote, and Sawubona Music Jam