Horseman of the apocalypse 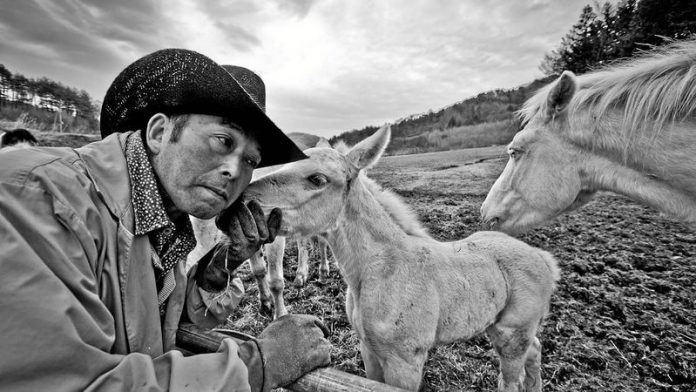 Until 2011 Tokue Hosokawa had only to peer through the window of his home in Litate village to confirm that all was well with his 100-year-old family business.

The 130 or so horses that once roamed this sprawling farm in Fukushima prefecture have been sustained by three generations of Hosokawa’s family. Some were sold for their meat – a local delicacy – but his animals were better known for their appearances in commercials, period TV dramas and films, and local festivals celebrating the region’s samurai heritage.

For decades, the 62-year-old horse breeder barely registered that his farm was just 40km northwest of the Fukushima Daiichi nuclear power plant. But the rural idyll was shattered on the afternoon of March 11 2011, when the facility was hit by a towering tsunami that caused meltdowns in three of its reactors.

Even as people living in the path of the plant’s radioactive plume were fleeing in their thousands, Litate’s 6 500 residents remained in their homes, convinced by official assurances that the village was safe.

But two and half years after the catastrophe Litate has become a nuclear ghost town. When Hosokawa looks out of his window these days, it is at empty, irradiated fields.

Like several other farmers in Fukushima, Hosokawa ignored a government order to exterminate all his horses and cows. “I told them that if the animals had been suffering from an infectious disease then I’d have them destroyed,” he said. “But not for something like this.

“Just after the accident one of the horses gave birth. When I saw that foal get to its feet and start feeding from its mother, I knew there was no way I could leave.”

The order to evacuate Litate did not come until weeks after the meltdown, as local authorities debated the risk posed to the village, which had only recently been voted one of Japan’s most picturesque places. Rather than acting as a shield, the mountain forests surrounding Litate had trapped radioactive particles, turning the village into a repository for dangerously high levels of contamination.

Hosokawa, who has the weathered complexion of a man who spends most of his waking hours outdoors, sent his wife and their daughter, Miwa, to safer parts of the prefecture.

But, unable to bear the thought of leaving his animals to starve, he stayed put and joined the handful of residents who continue to live in the contaminated homes they were ordered to abandon.

Although the evacuation order in parts of Litate has been partially lifted to allow residents to visit during the day, radiation levels are still too high for a permanent return.

Last week, visiting officials from the International Atomic Energy Agency (IAEA) urged the government to brace displaced residents from Litate and other contaminated towns and villages for the grim news that cleaning up their former homes will take much longer than expected.

The IAEA report was published soon after Japanese officials admitted that the five-trillion yen decontamination effort was woefully behind schedule. “We will have to extend the clean-up process by one year, two years or three years. We haven’t decided for sure yet,” said Shigeyoshi Sato, an environment ministry official in charge of decontamination.

As Litate’s population plummeted in 2011, Hosokawa managed to find new homes for more than 80 of his horses. Then, in January this year, he noticed that several among the 30 that remained, mainly foals, had become unsteady on their feet.

Within weeks, 16 had died in mysterious circumstances. Autopsies on four of them found no evidence of disease, and tests revealed caesium levels that were not high enough to immediately threaten their health.

Hosokawa recently began legal action against the plant’s operator, Tokyo Electric Power [Tepco] claiming 200-million yen compensation for the loss of the horses he was forced to sell or give away. The animals that died last winter are not included.

Tepco agreed to pay him 10-million yen for the loss of 39 horses he could prove were born on the farm, but refused to compensate him for the rest. The family refuses to back down. “No matter how long it takes,” said Miwa, “we will keep on fighting.”

The 30 or so animals left behind are sustained by feed paid for with donations, many of them sent anonymously, from horse lovers around Japan. One woman turned up on their doorstep with one-million yen in cash.

Hosokawa repays their generosity with gifts of Fukushima’s famed peaches.

He estimates that he has lost about one-billion yen in income since March 2011: the compensation the family received for the enforced evacuation has been spent on uncontaminated feed from the United States and Australia. “There was nothing left for the family,” he said.

This year Miwa (27) quit her job to help her father rescue what little is left of their business. But with no end in sight to the evacuation order and a shortage of people willing to take on his remaining horses, Hosokawa reluctantly accepts that the farm’s days may be numbered.

“We can’t give these horses the same life as they had before the nuclear disaster, and no one wants to buy them,” he said. “We can’t make a living from them, but unless we feed them, they will die.”

Almost three years on, one of the few signs of human activity in Litate are the crews of workers who have the near-impossible task of cleaning up the village’s contaminated landscape.

As quickly as they remove irradiated soil, rainfall washes more radioactive particles down from the mountainous forests that cover much of Fukushima prefecture.

“Most people I know want to return, but because of the radiation they know they never will. This place is awash with tears. It’s a village with no tomorrow,” Hosokawa said. –

See the slideshow at mg.co.za/horseman