There appears to be no coherent follow through on the City of ­Johannesburg's ­mayoral plan to "clean up" its inner city, even though it was hatched more than a year ago.

Meanwhile, the traders swept off its streets in the past month as part of the programme are living hand to mouth.

The Mail & Guardian is in possession of a report compiled by the office of Roslynn Greeff, the member of the mayoral committee in charge of development planning, which was completed on October 10 last year, and presented to Mayor Parks Tau's mayoral lekgotla on October 26 last year.

The report calls for a "new broom" to respond to the challenges of pollution and criminal activity in the inner city. It identifies "challenges" that place the inner city "on a slippery slope to potentially becoming a slum", including cleanliness levels, the invasion and hijacking of buildings, illegal trading, migration and influx management, poor management of city properties and neglected, empty potholes.

Yet, while it also calls for every city department and stakeholder involved, including the Johannesburg Metropolitan Police Department (JMPD), the Johannesburg Roads Agency and Pikitup cleaning services, to come up with a programme of action that includes medium- and long-term targets, "with emphasis on the short term", the city seems to have gone only as far as removing vendors from the streets.

The M&G understands that the city's plans for the vendors' immediate future was to have been presented to trader organisations on October 30, but at the time of going to press on Thursday afternoon, this had not taken place.

Unrepaired streets
JMPD spokesperson Edna Mamonyane told the M&G that the removal of the estimated 5 000 to 6 000 traders, which started at the beginning of October, dovetailed with a "simultaneous" cleaning of the streets and fixing of potholes.

However, inspection of the area between Park Station and Albertina Sisulu Street this week found uncollected rubbish and unrepaired streets.

Meanwhile, as many as an estimated 30 000 dependants of the evicted traders, the majority of whom have legal permits from the city to trade, remain unsure where their next meal is coming from, or whether their children can continue to attend school and write their upcoming final examinations.

"I ate only white bread last night [Wednesday]," said Mandla Mabaso, a cobbler who used to trade in Kerk Street's linear market and who was interviewed by the M&G last week when he was forced to stop trading on October 22. 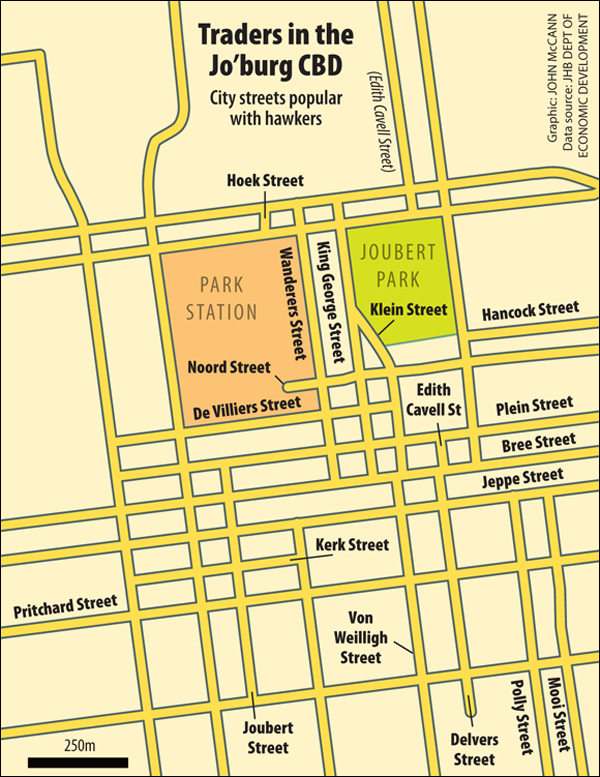 Mabaso, who has two children, aged three and five, said that he had decided to sell his computer "so that I can hopefully make about R700 to send my children to crèche and buy some food for the month".

He said he had borrowed money to pay his November rent and with his children's crèche costing R600, he hoped to use cash from the computer sale to buy food and groceries. Mabaso is also worried that customers who left their shoes with him to repair will not be able to reclaim them because he is no longer trading at his usual spot. And he may not be allowed to return until next year. This was confirmed by Mamonyane, who said that police were "going to maintain the streets like this until January next year".

Clean sweep
With its streets cleared of people, Johannesburg's vibrant hustle and bustle has diminished. The clearance of traders is also having a knock-on economic effect on business in the inner city.

"The problem is that our biggest customers were those hawkers," said France Madiba, who owns a pie shop on Twist Street.

"Now that they are gone, I have sold only 100 pies since the morning. When people come to buy from the hawkers, they inevitably find themselves buying from us as well."

Greeff's development planning report for the mayoral lekgotla calls for an integrated, cross-departmental plan of action from the city when rolling out the "clean sweep".

Yet there appears to have been very little planning, or integration, which has raised questions – both from trader organisations and residents who live and shop in the streets – as to the reasoning behind an apparently heavy handed approach from the city, which is contrary to its policy documents and appears to clean up people, and not much else.

Licences Bill 'too blunt' to clamp down on counterfeiting, trade minister admits

"It's like using a sledge hammer to kill a fly, but they haven't identified the fly," said Terence Corrigan, the research director at development and research company SBP, summing up the consternation and outrage surrounding the Licences of Businesses Bill, gazetted by the department of trade and industry in March this year.

The Bill outlined a new requirement for all businesses, irrespective of size, to register with their local municipalities.

Every business and person doing trade, from billion-rand multinationals to hawkers peddling mealies on the roadside, would need to go through a formal licensing process. Failure to produce the required documentation upon inspection would render a company legally ­culpable. The penalty? An unspecified fine, or the offender could be imprisoned for up to 10 years, or both.

Far-reaching search and seizure powers would allow policemen, metro cops and health inspectors to swoop in on non-compliant street vendors and confiscate their goods.

In the eyes of Lawrence Mavundla, the outgoing president of the National African Federated Chamber of Commerce and Industry (Nafcoc), the Bill would be "apartheid by another name". It would hark back to a time when "government bureaucrats had the power to inspect the books, search the premises, shake down the owners, and shut up the shops of so-called- undesirable elements".

Pat Horn, the co-ordinator of Streetnet International, a Durban-based organisation which represents about 4 000 street vendors, agrees. In a submission to the department, she said that the replacement of the existing Businesses Act with the new Bill, would "take us back to the era of forced removals".

Counterfeit trade
Trade and Industry Minister Rob Davies reacted first by defending the Bill and then by promising to re-draft it.

"The current draft is too blunt," Davies conceded at a media briefing in May. Nevertheless, a measure was needed to clamp down on counterfeit trade, which, Davies said, was the rationale behind the controversial proposed legislation.

Seven months down the line, the minister has taken the first steps towards making good on his promise. A task team has been formed, including representatives from the South African Informal Traders Alliance, the Chamber of Commerce and Industry, Nafcoc, the South African Local Government Association, the Consortium for Refugees and Migrants in South Africa and Streetnet's Horn.

The group has met twice, most recently on Monday October 30, and five sets of consultation about the Bill have been held with stakeholders in four provinces. More consultation is planned, and the team will be required to draft a report at the end of November based on the outcomes.

"We're extremely happy that the government has looked into our sector and was swayed by our submissions," said Horn.

"Having listened carefully to what the minister says, the intended purpose of the instrument is, if the redrafted Bill addresses itself more accurately, it should not have a negative impact on our sector."

It is anticipated that the consultation will continue for several months before the new draft is finalised. The department has undertaken to present the redrafted Bill to the National Economic Development and Labour Council before it is passed, which could lengthen the process. – Thalia Holmes

Tshwane: ‘There is no widespread harassment of hawkers’

His home is where the harvest lies