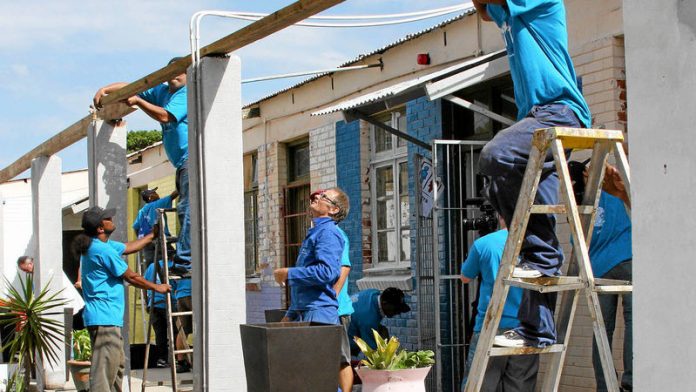 When Volkwagen Group South Africa polled its employees in 2010, the response was that 83% of them wanted to “get their hands dirty” doing active community work.

This call for participation led to the creation of the Volkswagen Show of Hands Employee Volunteer Programme, in which the company and its employees have contributed millions of rands to community development programmes in the Nelson Mandela Bay metropolitan area over the past two years.

Since its inception in 2011, Show of Hands has implemented 11 volunteer projects nominated by employees and aligned with the company’s key focus areas for corporate social investment (CSI). All projects are carried out with the input of the beneficiaries to ensure sustainability.

The programme forms part of the company’s broader CSI strategy, but has the dual role of breaking down internal barriers and forging a culture of caring.

“It brings people together. When you have employees and their families from shopfloor level through to directors working alongside each other, that is a very positive thing,” says Vernon Naidoo, manager of the Volkswagen Community Trust.

Employees’ involvement is not restricted to the manual labour required to execute projects because they are given the opportunity to nominate projects they believe will benefit local communities.

A nomination and selection process has been established to identify the projects that are likely to have the most impact on the affected community.

The programme’s reach extends beyond the company’s home base of the Eastern Cape, with its main production plant located in Uitenhage, although the province is the main beneficiary.

Naidoo says the company plans four projects a year for the Eastern Cape and two in Johannesburg, each with a budget of R175 000.

Most of the projects are focused on improving or refurbishing much-needed infrastructure at local schools, NGOs and aid organisations.

One of the beneficiary projects is the Nonkqubela Pre-Primary School in the Eastern Cape, which caters for some 100 children. Show of Hands volunteers planted lawns, gardens and fruit trees, installed play structures and water tanks, and supplied edu-play resources to the school.

At Lake Farm near Port Elizabeth, a facility that provides care and development programmes for about 100 adults with intellectual disabilities, Show of Hands cleared alien vegetation from the water course and rehabilitated its river bank.

Naidoo says part of the programme’s success is due to the fact that it is fully supported by the company’s managing director and its board of directors.

“The volunteer programme is a great way for all employees to showcase their skills and talents for the benefit of the underprivileged and marginalised in society. The staff even bring along their families to get involved. We have received requests from the staff to be involved in other similar projects, such as sports coaching and clothing collections.”

Naidoo admits that the programme has not yet reached significant levels of participation, with fewer than 200 of its 6 000 staff members actively contributing to the Show of Hands projects. More than 700 staff have collectively participated in volunteer projects since 2011.

“What we have discovered is that not everyone is into manual work and we have launched a new employee sports volunteer programme, following interest from staff who would like to get involved in coaching,” he says.

“We have people here who take part in world champs, so we have the skills.”

The extension of the programme to the sports fields dovetails with the R30-million People Pavilion sports stadium that VWSA erected in Uitenhage for community use.

This multiple-purpose complex caters to numerous sporting codes, including soccer, rugby, cricket, volleyball and basketball, and has a fully equipped gym, club house and restaurant.

Adapting and broadening the reach of the programme by including the coaching aspect is but one of the ways in which programmes such as these have to be kept alive.

Show of Hands is therefore supported by a comprehensive communications strategy that draws on existing channels, such as shopfloor meetings at the start of every shift.

The company has also established a number of “communications hubs” equipped with notice boards and monitors on which staff who do not have computer access can still read company notifications.