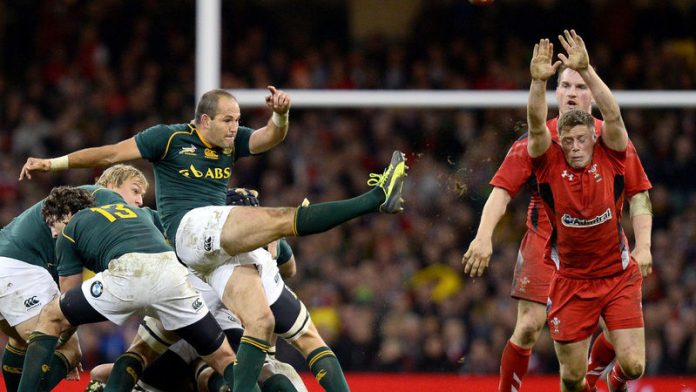 South Africa's greater potency with ball in hand saw the Southern Hemisphere side continue their dominance over Six Nations champions Wales with a 24-15 victory in Cardiff on Saturday.

Wales have won just once in 107 years of competition against South Africa and might feel this was an opportunity lost after dominating possession and territory.

The Springboks ran in three tries to nil as they capitalised on a fast start against a fired up Wales on a greasy surface at the Millennium Stadium.

Jean de Villiers, Bismark du Plessis and Fourie du Preez scored tries for the Boks, to go with a penalty and two conversions from Morne Steyn.

Leigh Halfpenny slotted five penalties for the home side, who had their opportunities in the Bok 22, but could not convert.

It was not an ill-tempered match, but South Africa played for 20 minutes with 14 men after losing Francois Louw and Coenie Oosthuizen to the sin-bin, while Welshman Gethin Jenkins was also shown a yellow card by referee Alain Rolland.

"They had possession, but it's important what you do with it," said South Africa captain De Villiers.

"We're not happy with the performance, it was a bit iffy, but we're happy with the win. We've got hard work to do before next week's game [against Scotland].

"Wales are a quality side and it's always tough here.

"We used every single chance we got and scored some great tries. I didn't feel there was any panic in the side.

"We'll keep our feet on the ground, stay humble and move on to the next game."

After two Halfpenny penalties had given the home side a 6-3 lead, South Africa scored the opening try as an excellent break from wing Bryan Habana saw hooker Du Plessis take the ball close to the line and centre De Villiers completed the move.

If that score was about speed, the second Springbok try was brute force as Du Plessis drove the ball over from a line-out after the South Africans had turned down a kickable penalty.

Both sides lost key players to injury inside the first 30 minutes. Wales were shorn of centre Jonathan Davies and wing Liam Williams within the first 12 minutes, and later veteran prop Adam Jones.

The Boks did not escape unscathed from the bruising opening half-hour either, flyhalf Morne Steyn limped off to be replaced by Pat Lambie, who moved from fullback. His position was taken by Willie le Roux.

With South Africa leading 17-6 by the 16-minute mark, Wales began to get an ascendancy in possession and turned that pressure into points with two more Halfpenny penalties.

South Africa lost Louw to the sin bin five minutes before the break for the use of an elbow, but managed to keep the ensuing Welsh onslaught at bay and ended the half leading 17-12.

It took 15 minutes for the next score, debutante prop Frans Malherbe was penalised for collapsing the scrum and the unerring boot of Halfpenny brought the home side to within two points.

Rolland then sin-binned Wales loosehead prop Gethin Jenkins and South African tighthead Oosthuizen, who had only been on the pitch two minutes, for collapsing the scrum after repeated warnings to both teams, which meant 10 minutes of uncontested scrums and 14 players per side.

The Boks surged ahead with a piece of brilliance from two of their 2007 World Cup winners recently recalled to the side.

Scrumhalf Du Preez booted the ball down the touchline and Jacque Fourie took advantage of a fortuitous bounce to collect the ball and swiftly switch the play inside to on-rushing Du Preez, who coasted in for the try under the posts on 64 minutes.

Wales can count themselves unlucky, Fourie was in front of Du Preez when he kicked forward and having not retreated, appeared to be in an offside position.

"There's a massive amount of frustration. We didn't win and that's all that matters. There was belief that we could have won but it wasn't to be," Wales captain Sam Warburton said.

"We were in control for 23 minutes of the second half and one loose pass and we were punished badly. Against the top sides you make a small mistake and you pay the price." – Reuters, AFP