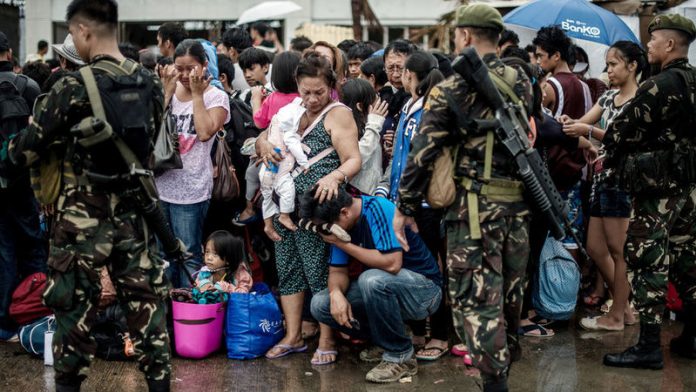 The Philippine government said on Tuesday it had deployed armoured vehicles, set up checkpoints and imposed a curfew to help end looting in a city devastated by Super Typhoon Haiyan.

Tacloban – on the central island of Leyte – bore the brunt of Friday's category-five storm with at least 10 000 people feared to have died there, according to the United Nations.

The devastated provincial capital – a city of 220 000 residents – has also seen some of the worst pillaging. Famished survivors desperate for food and medical supplies have also ransacked aid convoys, hampering relief efforts.

Interior secretary Mar Roxas said four Simba armoured personnel carriers had been deployed to contain looting and help restore law and order, a day after hundreds of Philippine soldiers and police were sent to the city.

"We are circulating them [the Simbas] in the city to show the people, especially those with bad intentions, that the authorities have returned," Roxas told DZMM radio.

Checkpoints have been set up to stop people from mobbing relief trucks, he said.

Super Typhoon Haiyan – one of the strongest storms on record – flattened buildings and knocked out electricity and water supplies as tsunami-like waves and brutal winds tore across large swathes of the of the archipelago, leaving survivors with virtually nothing.

'Homes were washed away'
Many resorted to looting, with a charity saying that a man with a machete had tried to rob aid workers who were receiving a delivery of medicine.

"The presence of policemen, military and government forces will definitely improve things [but] it will not be overnight," Roxas said, confirming reports that the Tacloban city government had imposed a curfew on residents of 10pm (1400 GMT) to 6am.

"It is a tool that we are using to minimise the looting and break-ins. We know some people cannot return home [during the curfew] because their homes were washed away but it is more effective against roving gangs who are looking for targets of opportunity," he said.

It is not clear where newly homeless residents are meant to go during the curfew.

Roxas added that the public works department had cleared at least one lane of a highway entering the city, which would speed up entry of supplies. It is hoped that incidences of looting will decrease as food relief flows in to the isolated area.

"Now that we have achieved number one and two, the priority is the recovery of the cadavers," he said. – AFP