Only Mugabe can make us move, say illegal Zim settlers 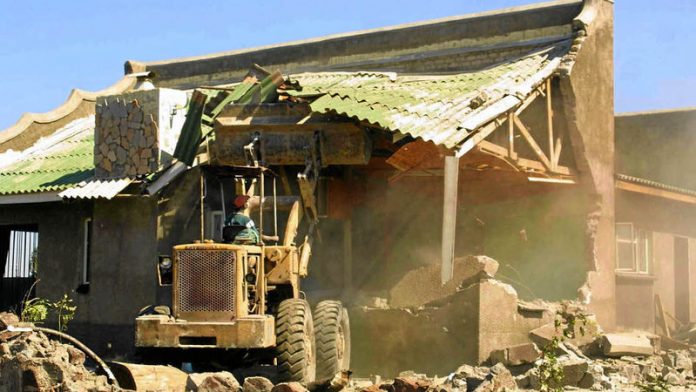 In the slum last Sunday, word went round that the bulldozers were coming. And so, under the Zanu-PF flag, members of the Magamba eChimurenga housing co-operative sat around planning how to defend their homes.

The settlement is in Harare South and run by a group of war veterans and Zanu-PF supporters. If the government carries out its threat to destroy illegal homes, it is one of the settlements that will be flattened.

However, for Zanu-PF, that would mean throwing out into the cold the many thousands of supporters who helped it to gain votes in largely pro-opposition urban areas.

Harare South, for instance, was the first urban constituency to fall to Zanu-PF since 2000, after the party stuffed the area with illegal settlers.

"Zanu-PF put us here; only Presi­dent [Robert] Mugabe himself will tell us to move," one man said, to cheers from other residents.

On Tuesday, the illegal settlers appeared to be winning the war. Tendai Savanhu, the deputy lands minister and a senior Zanu-PF official, was on the back foot at a meeting with the settlers. There would be no demolitions, he promised.

Demolitions: Whose idea is it anyway?
"You voted for Zanu-PF because you know it is the only party that has the people's welfare at heart. We are there to solve and not create problems," he said.

The demolitions were the Move­ment for Democratic Change's idea, he said.

An internal Harare council report says the city has about 200 "pay schemes" or co-operatives. But these are only the registered groups.

The Eyecourt settlement is one of those built by thousands of "housing co-operatives", which are mostly Zanu-PF aligned groups that are allocated land, often without the knowledge of local councils, to build homes for the poor.

It is a stark reminder of the deepening housing crisis, which is worsening as more workers get thrown out of work and the rural-to-urban migration increases after repeated droughts.

Zanu-PF has taken advantage of the poor's thirst for housing, parcelling out land on the outskirts of Harare and other urban areas to dilute the opposition's urban support base.

Housing co-operatives spinning out of control
But now it seems the housing co-operatives are spinning out of control and the government is unsure how to deal with a problem it created. Although Savanhu said there will be no demolitions, Deputy Local Government Minister Joel Matiza said there will be "no going back" on the clean-up. It is necessary to restore order to urban areas where some houses have been built illegally over sewer mains, in wetlands and over power installations.

But the government appears to be back-pedalling. Local Government Minister Ignatius Chombo said an audit will be held first before any demolitions are carried out.

The state media, which traditionally toes the Zanu-PF line, has warned against the action.

Demolitions would be a mirror of 2005. Just after Zanu-PF won a two-thirds majority, it launched Operation Murambatsvina, which left more than 700 000 homeless and drew United Nations condemnation.

Zanu-PF was also accused of hitting back at opposition supporters, a charge the MDC repeated this week.

But Zanu-PF is now trying to woo urban support. In its election manifesto, it promises "a vigorous housing programme to address the housing backlog using financial resources from assets to be unlocked from the indigenisation of foreign-owned companies".

Promises of houses
At least 250 000 houses would be built in the next five years, it promised.

But there are just a few signs of that so far. Old Mutual, as part of its empowerment deal, is building 3 000 low-cost homes.

The government has also signed a deal with the Chinese company Henan Guoji for the construction of 10 000 houses.

But these projects do not even make a dent in the huge demand for housing. In Harare, it has been 20 years since the last major housing project, according to the city's director of housing, Justin Chivavaya.

Official statistics put the housing backlog at about 1.2-million, although experts say the actual figure is much higher.

The government says it has spent $25-million on new housing developments since last year. But officials privately say $200-million is needed each year for the next three years to clear the backlog.

Deposits required
To get the little new government housing available, civil servants must pay a deposit of $3 000, but other workers are required to pay $10 000. Few can afford this and end up paying for illegal stands instead.

The Combined Harare Residents' Association said: "Illegal structures do not suddenly crop up. There is the corrupt hand of politicians and incompetence of policymakers."

The Zimbabwe Lawyers for Human Rights has said demolitions are unconstitutional as the Constitution protects citizens from arbitrary eviction.