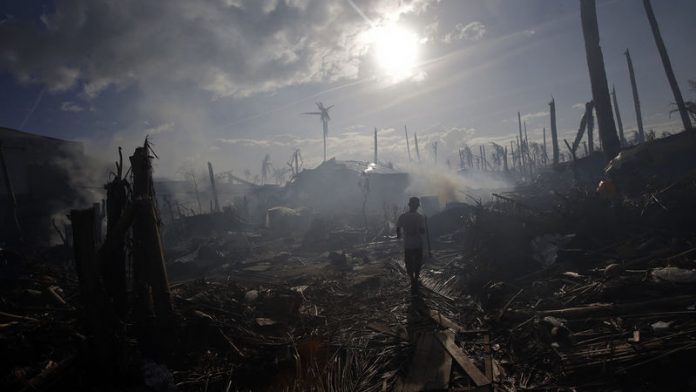 Mobbed by hungry villagers, US military helicopters dropped desperately needed aid into remote areas of the typhoon-ravaged central Philippines, as survivors of the disaster flocked to ruined churches on Sunday to pray for their uncertain future.

The Philippines is facing up to an enormous rebuilding task from Typhoon Haiyan, which killed at least 3 974 people and left 1 186 missing, with many isolated communities yet to receive significant aid despite a massive international relief effort.

Philippine authorities and international aid agencies face a mounting humanitarian crisis, with the number of people displaced by the catastrophe estimated at four million, up from 900 000 late last week.

President Benigno Aquino, caught off guard by the scale of the disaster and criticised by some for the sometimes chaotic response, visited affected areas on Sunday. Not for the first time, he sought to deflect blame for the problems on to local authorities whose preparations he said had fallen short.

In Guiuan, a hard-hit coastal town in eastern Samar province, he praised the city mayor for conducting a proper evacuation that had limited deaths to less than 100, saying that was a contrast to other towns.

"In other places, I prefer not to talk about it. As your president, I am not allowed to get angry even if I am already upset. I'll just suffer through it with an acidic stomach."

While aid packages have begun to reach more remote areas, much of it carried by helicopters brought by the USS George Washington aircraft carrier, the United Nations said people were still going hungry in some mountainous provinces. It said information about several provinces in the west of the Visayas region remained "limited", with 60% of people in towns in the north-east part of Capiz province needing food support.

"I remain concerned about the health and well-being of the millions of men, women and children who are still in desperate need," UN humanitarian chief Valerie Amos said in a statement.

In Cabungaan, a village in the interior of Leyte province's Tanauan district — where as many as 1 200 died — the arrival of a US Seahawk helicopter on Sunday was the first outside help since Haiyan made landfall.

With children in the lead, scores of villagers ran from rebuilt shacks to greet the helicopter as it settled in a flattened patch of grass. Locals jostled for a view, beaming and yelling "Thank you! Thank you!" as two crew members rushed out aid marked "from the American people".

For the past week, the village's 200-plus residents had been living on one meal a day of "dried fish, sometimes coconuts, not enough rice", said Richel Maballo (19). Too far from the shore to be hit by the surge of water that devastated the regional capital Tacloban city, the village suffered no deaths.

Back in the air, a member of the aircraft's crew, Jeremy Smith, scribbled in a notebook: "That LZ [landing zone] was tame compared to others where the aircrafts have been mobbed."

The government estimated damage to infrastructure and agriculture at about 10-billion pesos ($230-million), the bulk of it in the farming sector. The United Nations warned that economic and human costs could rise if aid did not reach farmers in rice-growing regions in time for the next planting season in December and January.

It also said that fishing, another crucial food source, had been placed in jeopardy by the storm.

"The destruction of boats, fishing gear, fish ponds and related equipment left many families with no means of livelihood and decreased protein intake," the UN Office for the Coordination of Humanitarian Affairs said.

In Tacloban, churchgoers in the deeply religious Roman Catholic-majority country knelt in prayer in the shells of ruined churches.

At Santo Niño Church near the waterfront, Rosario Capidos (55) sat crying in one row, hugging her nine-year-old grandson.

Capidos had been sheltering at home with nine other members of her family when Haiyan struck on November 8. As the waters rose, she floated her three grandchildren on a slab of styrofoam through a road flooded with debris and shipping containers to a nearby Chinese temple. Her family survived.

"That's why I'm crying," she said. "I thank God I was given a second chance to live." – Reuters