Okmalumkoolkat: The koolkat of future kwaito 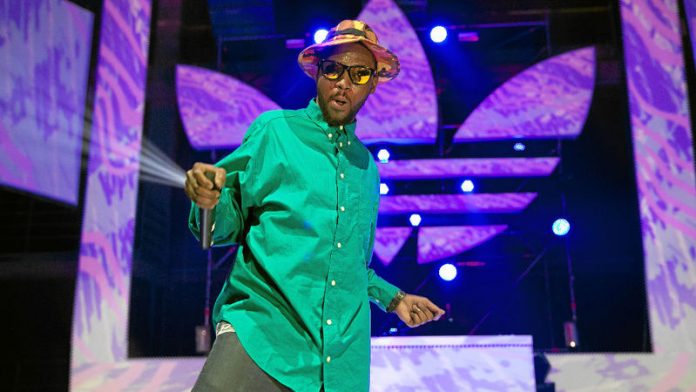 By most accounts, Durban-raised Okmalumkoolkat ? stole Danny Brown's thunder when he took to the stage at the recent Unite Joburg event at Walter Sisulu Square in Kliptown, Soweto.

Appearing just minutes before the gap-toothed Detroit rapper, Okmalumkoolkat finished off his verse on Gusheshe, his hit with Cassper Nyovest, before being joined on stage by dancer and graphic artist Manthe Ribane.

Even though the waif-like Ribane generally did her own thing, always at arm's length from Zwane, her street-inspired footwork embodied the energy of the music and infused Zwane with even more of his trademark cool, knowing confidence.

Johannesburg resident Okmalumkoolkat is a vocalist, dancer, clothing designer, DJ and tastemaker who stands at the nexus of underground culture and its emergence in the mainstream.

Many people first became aware of his musical talents with the release of Dirty Paraffin's rough-hewn mixtape Dirty Paraffin's Greatest Hits Volume 1. Doktor Spizee, another Durban export, manned the beats, which were raw, infectious samples from the likes of Michael Jackson, Chicco and Kraftwerk.

His vocal style back then was unrefined, borrowing from kwaito, hip-hop and Eighties and Nineties pop culture. His performance has always hinted at his own dancing abilities, but on Friday he was able to play that off against the talented Ribane.

"I've danced with her at a party, but not on stage," he says over the phone, a few hours before his performance at the South African Hip-Hop Awards on November 20.

"We've have been talking about doing something for two years now. I saw her at the show and spoke to her and she was down, so I figured the house track, Usangkhumbula, would be the one."

Usangkhumbula, a song with staccato synths and off-beat popcorn snares, off Kid Fonque's recent Kid Fonque & Friends album, has Durban kwaito written all over it, in part due to Okmalumkoolkat's infectious one-liner chorus the track gets its name from.

"The thing is, in Durban everybody is a dancer. Everybody dances. You don't have to be umajaivane [a highly skilled dancer] to dance. Whereas in Jo'burg or Cape Town, maybe 5% of the people dance [at shows] and everybody else is posing, chilling and acting cool. What I'm trying to do is get everybody to dance, enjoy the music and enjoy their youth."

Ribane, who has worked with the likes of Professor and has been featured in several music videos, dances with Vintage CRU, a Johannesburg-based company Okmalumkoolkat says is "taking over all the dance stuff in the country".

"With Manthe, we just want to push out more dance styles that everybody can do, packaging those dance styles and putting them out through music videos so that people can see what is being done in South Africa."  One of the styles that already has the Okmalumkoolkat seal of approval is the Boy$In Buck$ special known as the "taxi driver".

On a YouTube clip titled "Boy$In Buck$ Bust the Taxi Driver at Pop Bottles Finale '11", you can see several members of the group trying out variations of the move, which involves taxi driver-related hand and arm movements.

Okmalumkoolkat says Boy$In Buck$ is a vehicle for him to do more rap-oriented stuff. "Everybody else in that group is rooted in hip-hop, so I wanted to be a part of that. They have bestowed on me the role of executive producer of their [upcoming] album, so I'll be busy with it soon."

Asked how his musical direction differs from that of his friends, Okmalumkoolkat offers several off-the-cuff phrases like "digital maskandi" before retracting them.

Born Smiso Zwane, Okmalumkoolkat is quite adept at the art of self-endorsement. The use of monikers to describe the various aspects of what he does has not only bolstered his ubiquity, but has resulted in him introducing several interesting terms to the lexicon of South Africa's popular culture.

The home page of his tumblr lists several of these, but throughout his relatively brief musical career he has coined and then abandoned several phrases to describe his musical experiments. Back when most of his performances happened as Dirty Paraffin, Okmalumkoolkat toyed around with the phrase "nu-age kwaito" and actually called the sparse, warbling electro they produced then "primus stove music".

Tentatively, he admits to having coined yet another phrase,"gqom life", borrowed from the West African musical form, highlife.

He doesn't explain its sensibilities, but perhaps a track like Usangkhumbula, sounding as much like it was cooked up in London's Labroke Grove district (once the nerve centre of broken beat) as in the Durban township of KwaMashu, explains it.

Suffice to say, pushing gqom (the scabrous underground version of Durban kwaito music) to the world is one of Okmalumkoolkat's current preoccupations. "I've got everyone interested in gqom," he says nonchalantly.  "In Cape Town, I've been giving it to all my electro friends, like Jumping Back Slash. He's coming out with an EP now where he is calling the tracks "gqom romance".

"Every time I'm in Cape Town, [Okmalumkoolkat DJs as DJ Zharp Zharp] I play gqom and not much else. I'm sending it out to my friends in London as well."

Okmalumkoolkat recently did a mix for Big City Nights Radio, which is produced by Manny Zambrano, at the invitation of his friend Okzharp.

"Whatever is happening in Durban, I try to push. But the one thing about igqom is that it's no longer just coming out of Durban. Even guys in Mpumalanga are doing it, people who are not interested in deep house."

Okmalumkoolkat recently collaborated with London-based LV on the album Sebenza, will work with Cid Rim and The Clonious in a collaboration titled Holy Oxygen.

The harmony behind the Buskaid Soweto String Ensemble