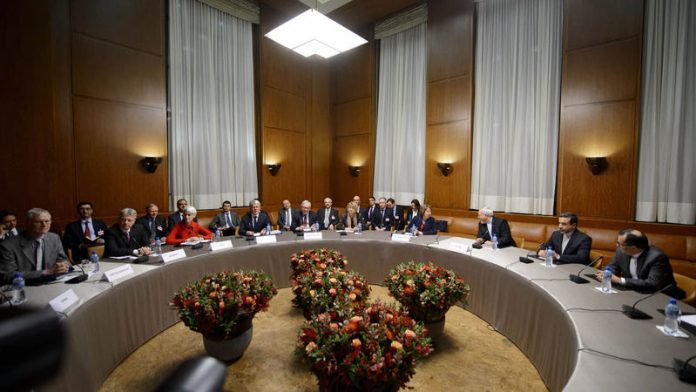 Iran's supreme leader, ­Ayatollah Ali Khamenei, has said he has set limits for the country's ­negotiators at nuclear talks.

As senior diplomats from Iran and six major powers gathered once again in the Swiss lakeside city of Geneva, 10 days after coming close to a historic deal, Khamenei delivered a defiant speech to volunteer militiamen, the Basij, in an apparent attempt to reassure the country's hardliners that the regime was not making strategic concessions.

"We insist that we will not step back one iota from our rights," the supreme leader said.

The 74-year-old cleric is the single most powerful figure in the regime, but despite his title, does not wield absolute power. Rather, he has to juggle a variety of interest groups and factions. The Basij are under the control of the powerful Revolutionary Guards force.

Khamenei used his speech to reaffirm his overall control over the direction of the talks, which are being conducted by a team led by Foreign Minister Mohammad Javad Zarif.

"We do not intervene in the details of these talks. There are certain red lines and limits. These have to be observed. They are instructed to abide by those limits," he said.

Security for the three days of negotiations in Geneva was noticeably higher than for the previous round, following Tuesday's bomb attack on the Iranian embassy in Beirut, which killed at least 22 people.

The previous round of nuclear talks ended in the early hours of November 10, amid differences on whether any interim agreement should state that Iran had a right to enrich uranium, and whether any construction work should continue on Iran's heavy water reactor in Arak.

In the run-up to the latest round, due to finish on Friday November 22, there were signs that the gaps on both issues had narrowed, with Zarif saying that Iran did not require other countries' permission to continue enrichment, and the emergence of a possible compromise over Arak in which work on uranium fuel assemblies would be halted, while other construction continued.

In his speech, Khamenei singled out France for criticism, probably in response to the tough line taken at the previous Geneva round by the French delegation.

French officials, Khamenei said, were "not only succumbing to the United States, but they are kneeling before the Israeli regime".

He derided US government policies, but insisted that Iran had no animosity towards the American people.

Israeli Prime Minister Benjamin Netanyahu kept up a lobbying campaign against the proposed interim deal with Iran, flying to Moscow on Wednesday to urge Vladimir Putin to toughen the Russian negotiating position in Geneva. Disagreements on the negotiations have already caused a significant cooling in relations between Israel and the US.  – © Guardian News & Media 2013