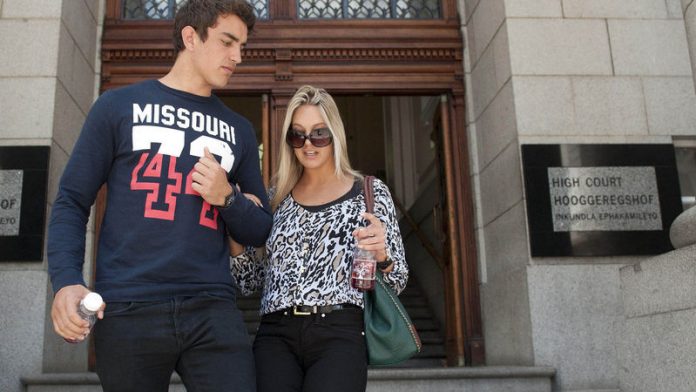 Swimwear model Candice-Jean van der Merwe may be summoned to the Cape high court to explain the origins of $15.3-million she claims was a donation from an unnamed Arab admirer.

Van der Merwe says the astounding sum was a gift from “a companion” she met at a private Seychelles resort where she was among models hired to “lend a sense of glamour and exclusivity” to “lavish parties” attended by super-wealthy guests.

She also claims to have received two luxury vehicles, worth a combined R2.75-million, as gifts.

The South African Revenue Service has obtained an interim order placing Van der Merwe’s assets under the control of a curator. Sars suspects the “gifts” are linked to Van der Merwe’s father, Cape Town businessperson Gary van der Merwe, from whom it is seeking to recover about R291-million.

Sars argues that Van der Merwe’s story lacks credibility. Advocate Jeremy Gauntlett this week asked the Cape high court to reject her version or to order her to submit herself to cross-examination under oath.

In September, Van der Merwe launched an application to unfreeze her millions, which had been placed under the control of a curator, Cloete Murray, along with the assets of more than 20 other entities Sars believes are associated with her father.

Model
In her affidavit, Van der Merwe says she has been a model since her primary school days.

“In 2012 I was contracted through Ice Models to travel to the Seychelles to the Plantation Club on Mahe Island.

“The Plantation Club is a private resort in the Seychelles which is owned and frequented by some of the richest private individuals in the world.

“They include multi-US dollar billionaires for whom money is no object. This type of resort is the playground of the super-wealthy where they can relax in total privacy …

“On my first trip to the Seychelles from 13 October to 17 October 2012 I got on very well with the persons I met at the private resort. While I cannot be certain as to the reasons for this, I suspect that it included the following factors: I have a very healthy lifestyle and I do not smoke at all or drink alcohol other than in negligible quantities on social occasions and I follow a strict exercise regime. I have also been told that I have a very engaging personality.

“This resulted in me being booked through Ice Models to travel to the Seychelles on subsequent occasions.”

The Plantation Club hotel was acquired under controversial circumstances in 2008, when the government of the Seychelles forced the previous owner into liquidation. The property was sold to a company linked to Abdul Mohsin bin Abdulmalik Al-Shaikh, a wealthy businessperson close to the Saudi royal family.

'Playboy mansion'
According to a Seychelles opposition website, the resort, now managed by Kempinski Hotels, has become a “playboy mansion for Arab princes”.

Van der Merwe recounts that, during a trip to the Seychelles in March 2013, one of the topics of conversation that came up was cars that she liked.

“I made no secret of the fact that my dream car is an Audi R8 … When I returned to Cape Town … I was involved in a car accident in which the car I was driving was written off … I was very traumatised and discussed the incident with numerous people, including persons with whom I have become friendly while I have been in the Seychelles.

“A few days later, I was thrilled to receive a phone call from a salesman … at the V&A Waterfront Audi dealer who told me to come and fetch my car.”

The $15.3-million, transferred from a Lebanese bank, also came from her Seychelles friends, she claims.

“Earlier this year, a number of my friends whom I had met in the Seychelles came on a trip to Cape Town … It was suggested to me that I look for a house in one of those areas which I liked because I would receive funds to pay for it …

“Subsequent thereto … the amount of $15.3-million was remitted to me by Mr Mahomed Rawas.”

Anonymous VIP
Rawas, Van der Merwe later told investigators from the Reserve Bank, was the assistant to the real donor, a VIP whose identity she disclosed but whose name is redacted from the court papers.

She immediately appointed her father to represent her in dealing with this windfall, she says, because he was an experienced businessperson.

The cash came none too soon to stave off the provisional liquidation of Zonnekus Mansions, the company that owns the R40-million Milnerton estate where Gary van der Merwe lives.

He has consistently claimed he has no assets and no income, and that the money given to his daughter could not possibly have come from him.

He is best known for his involvement in the helicopter industry – he ran the Huey Extreme Club, which offered joyrides over the Cape Peninsula in a Vietnam-era Bell Huey chopper.

In 2004, he was arrested as part of a joint operation between Sars and the erstwhile Scorpions unit.

Long legal fight
He has been fighting off the charges since then, launching legal challenges to the authority of the Scorpions, the validity of searches executed in 2007 and the decision of the Legal Aid Board to deny him financial assistance.

The R291-million demand by Sars relates mainly to allegations of VAT fraud – a number of companies with which van der Merwe was associated made VAT refund claims based on what Sars claims were bogus schemes.

In his latest move, Van der Merwe has raised a constitutional challenge to sections of the Tax Administration and VAT Acts under which the preservation order against him and his daughter was obtained.

A veteran criminal lawyer, Jan Heunis SC, and a junior advocate have been appointed by the Van der Merwes to fight off Sars.