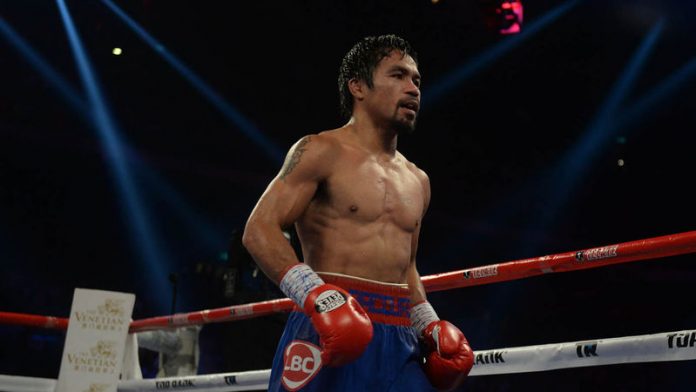 Returning to the ring after almost a year's absence, Pacquiao wore Rios down with his trademark combination punching and won 120-108, 119-109 and 118-110 on the scorecards at The Venetian casino in Macau.

It was an emotional victory for Pacquiao after the devastating typhoon which his home nation the Philippines earlier this month, killing thousands.

"This is not about my comeback," Pacquiao said in the ring. "My victory is a symbol of my people's comeback from a natural disaster and a natural tragedy."

Pacquiao got the better of the opening two rounds, sending Rios to the canvas in the opening frame, although the referee contentiously ruled it as a slip rather than a knockdown.

The American asserted himself in the third, landing some crisp blows that raised hopes of a genuine contest before Pacquiao – spurred on by a capacity crowd at the 13,000-seat Cotai Arena including many Filipino fans – dominated the remainder of the contest.

Rios was game, continually walking forward to challenge Pacquiao but was unable to land any telling blows.

After seven rounds, Rios was getting attention to cuts under both eyebrows, and with the scores going against him, needed something special.

Cautioned by the memory of his previous fight when he walked into a savage Juan Manuel Marquez punch that knocked him out, Pacquiao was on guard throughout the closing rounds but a tiring Rios offered little threat over the final four rounds.

"Recovering from the knockout and giving a good show was what I wanted to prove to myself and everyone," Pacquiao said.

Pacquiao will now eye a potential rematch against Marquez, if the much-desired fight with Floyd Mayweather Jr. doesn't eventuate. Sapa-AP