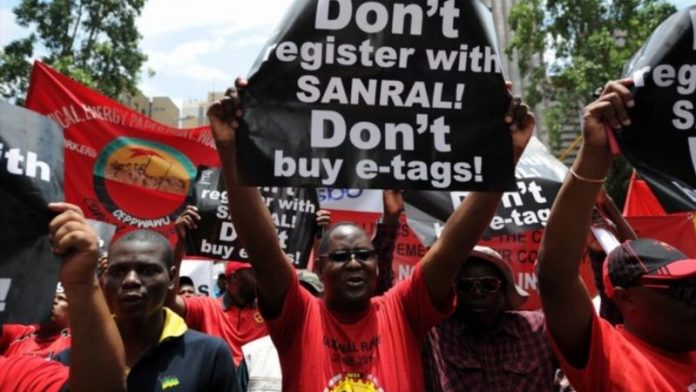 People who were interviewed at malls expressed anger and confusion ahead of its implementation next Tuesday, after several failed attempts in court by civil society groups to have the system canned

At the Menlyn Park shopping centre in Pretoria, at least 15 people were seen at the e-toll shop after midday.

Samuel Mosoane said that although he disagreed with the South African National Roads Agency Limited (Sanral)'s e-tolling, he wanted an e-tag so that he did not get into trouble with the law.

He described e-tolling as "an unnecessary expense".

While the interview was being carried out, a mall security guard told a Sapa reporter to leave the premises if she did not have evidence of permission obtained to interview people at the mall.

Reporters visiting the e-toll retail outlets at Maponya mall in Soweto, and Bonaero Centre in Kempton Park were also asked to leave.

'No other choice'
Outside the shopping centre in Menlyn Park, Ouma Lerutla said the e-tolling system was unfair, but she would get an e-tag because she had no choice.

"If I don't get one, I will then be in trouble with them," she said.

Katlego Tibame said he would not get an e-tag unless he was caught by law enforcement officials.

"E-tolls are just an added expense for motorists. I think that the government should scrap it completely."

At the Cresta mall in Randburg, 10 people were queuing in the e-toll outlet before midday, with some seeking clarity on the e-tags, and others buying them.

One customer said her family was travelling all over the country. "We need to know if we need an e-tag for this. We are here to get some information," she said.

John Clarke from Johannesburg said: "I want to know what the alternative charges are for alternative users. If I refuse to pay as an alternate user, will I be prosecuted under the Sanral Act or Aarto?"

"Is it going to be enforced by the South African Police Service, the metro police or by Sanral?"

Few buying
At a quiet Cedar Square shopping centre in Fourways, there were only four people inside the e-tag shop around 11.30am.

A shop assistant, who refused to be named, said he had a busy couple of days, but the process was running smoothly.

"It has been busy but it takes about eight to 10 minutes to register," he said.

"We have had no glitches so far."

He said customers were from mixed age groups.

A customer, Janet Edmiston from Johannesburg, said: "I am not happy at all. I am forced to get an e-tag, else I would end up paying more."

She said she did not use the highways a lot, but from time to time it was necessary. She also felt it was unfair that only some people were granted exemptions.

At the San Ridge Square in Midrand, seven people were seen inside the shop before 1pm.

An employee said people were not coming in big numbers – with about 20 people registering a day.

'Cornered'
A man, who did not want to be named, said he felt people were being cornered into buying e-tags.

Another customer said she wanted to comply with the law.

At the Centurion mall, where five people were in line, one customer said he was avoiding a last-minute rush. Another said she would not register and would simply avoid the tolled highways.

At the Bonaero centre in Kempton Park, a 71-year-old pensioner, said he did not earn a salary and did not have enough money for e-tolling.

"I feel with my age I should also … enjoy the same benefit [being exempted].Therefore I will not be participating in the e-tolls … The money used to develop this ridiculous system could have been used to deliver services for poor people who are constantly protesting."

A shop assistant said most people preferred the pre-paid option.

In other big malls, like East Rand mall, e-toll shops were busy and constantly had queues, she said.

Avoiding penalties
At Maponya mall in Soweto, e-toll shop assistants refused to speak to the media.

Customer Tseliso Mohotsi said he was not happy with e-tolls but he would buy them to avoid penalties.

Gugu Cindi came to the outlet to find out more about the system as she still did not understand why she had to pay for it.

"I feel like the government doesn't have our interests at heart … why should I pay when I'm already paying tax?"

Sasavona Baloyi said: "I will only support e-tolls if the government says it's a criminal offence not to have an e-tag."  – Sapa

If the ANC general secretary has his way, Ithala chair Roshan Morar could soon be an ambassador
Read more
Sport