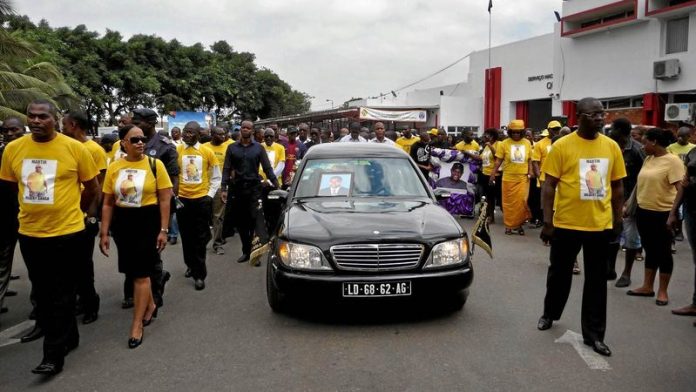 Tensions are rising in Angola following the fatal shooting of an opposition party member and the use of tear gas and water cannons at an anti-government protest at which nearly 300 people were arrested.

People all around the country are angry, not just about how the police managed the protest but also about how the state media chose to gloat that it "defeated" those trying to demonstrate.

"I think, generally, people feel things have gone too far now," the respected Angolan journalist Rafael Marques de Morais said. "The police statement has upset a lot of people. It was too much to try to justify what happened."

The civil society group, Acção para o Desenvolvimento Rural e Ambiente, said it was "worrying" and "serious" that, during peacetime, "human lives are being lost due to differ­ences in political opinion" and it called on the public media to show less partiality in their reporting.

A teacher, Manuel de Carvalho Hilberto Ganga, a member of the youth wing of Angola’s third-largest opposition party, the Convergência Ampla de Salvação de Angola-Coligação Eleitoral (CASA-CE), was detained by soldiers from the presidential guard in the early hours of Saturday morning for his part in distributing posters advertising a demonstration that had been called in the name of two missing activists who, is it claimed, were murdered by security agents.

The 28-year-old was reportedly shot twice by a group of soldiers assigned to protect the president and his family.

Protests over alleged torture and murder
The Polícia Nacional described his death as "an unfortunate incident" but said that Ganga had violated a security perimeter and was distributing "subversive and offensive propaganda posters".

However, several witnesses dispute this and say the activist was picked up outside a football stadium nowhere near the presidential palace.

Discrepancies about the circumstances of his death aside, what is clear is that coming so soon after the leaked reported about the disappearance and alleged murders of António Alves Kamulingue and Isaías Sebastião Cassule, it has the potential to light a dangerous fuse.

Last weekend’s protest was convened by the opposition party, União Nacional pela Independência Total de Angola (Unita). It was in response to the allegations that war veterans Kamulingue and Cassule, who disappeared after trying to organise a protest in May 2012, were tortured and murdered by officers from the State Intelligence and Security Service of Angola.

On the Friday evening before the Saturday morning protest, the ministry of the interior used state television to read out a communiqué banning the demonstration. It justified its decision by saying there was a need to prevent "potential conflict aspects that might disrupt public order security, and calm, and even internal security".

A new level of anger
For Marques, the fact that so many people, as well as the leadership of Unita, chose to ignore the warning from the government and turn our regardless was very significant.

"A year ago, no-one would have showed up," he said. "But now, they are prepared to stand up to the authorities and that reveals a new level of anger.

"There is a new wave of people finding new solidarity and, in some ways, Ganga, Cassule and Kamunlingue have all become symbols of that, which is exactly what the MPLA didn’t want to happen but has."

Although the largest concentration of people formed in the capital Luanda on Saturday, there were also small pockets of people who tried to protest in other towns and cities around the country, though their attempts were quickly put down.

Its deputy Africa director Leslie Lefkow said: “The government’s killing of an activist and the mass arrests and dispersal with tear gas of peaceful protesters is only increasing public discontent. Opposition parties and activists have every right to peacefully protest alleged murders by security forces and to call for justice.”

Lefkow urged a full investigation into the fatal shooting of Ganga and into allegations that a human rights lawyer was also manhandled by police officers on the day of the protest.

“We are left with no other way than to go to the streets. Maybe then they [the ruling MPLA party] will listen to us,” he said.

Investors, including many in South Africa, will be watching developments closely. They will be hoping that the oil-rich country, which since the end of the civil war in 2002 has offered businesses rich rewards, manages to contain this anger and it that it does not spill over into sustained civil unrest.

Angola’s long-serving president, José Eduardo dos Santos, will also be watching carefully. Currently in Spain on a “private visit”, which many believe relates to his allegedly deteriorating health, the 71-year-old is understood to be planning his exit from power after 34 years at the helm.

Should he decide to leave office before the next election in 2017, Vice-president Manuel Vicente, the former chief executive of the county’s powerful oil company Sonangol, would take over. However, neither this recent protest nor the way it has been handled is doing much to create a smooth exit.

Mozambique’s financial scandal may get even bigger