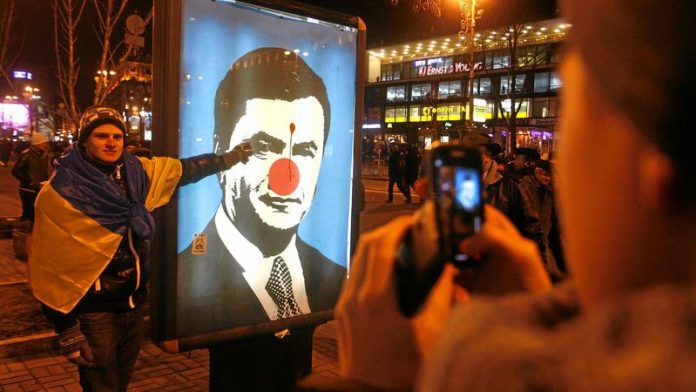 President Viktor Yanukovych is the great survivor of post-Soviet politics in Ukraine.

He made a comeback from one revolutionary defeat. His main rivals are either tarnished or in jail. He is both courted and threatened by the Kremlin, and wooed by Brussels. He had an extremely hard and poor upbringing in the industrial wastelands of eastern Ukraine. He is now a very wealthy man with a large estate outside Kiev.

The young people thronging the streets and squares of the Ukrainian capital and other cities are baying for his head, identifying the president as the embodiment of what they do not want their country to be. Jailed twice for assault as a youngster, Yanukovych has thrived in the thuggish world of Ukrainian politics. He will not go easily.

Commented Lilia Shevtsova of the Carnegie Russia think-tank in Moscow: "He is trying to ensure his re-election in 2015. This primary motive has guided his actions. He concluded that European integration would not guarantee him victory, and decided to fall back on Putin’s formula of preserving power."

Since his refusal to commit to Europe and instead opt for Russia at an European Union (EU) summit in Lithuania last Friday, the ­president has been surprisingly quiet. Hundreds of thousands have commanded the streets of Kiev and occupied official buildings. He has failed to respond in words, except to issue a statement at the weekend to say that he was deeply indignant about the riot police attacks on peaceful protesters at dawn last Saturday. But public speaking has never been his strongest suit.

Yanukovych presides over a dysfunctional, deeply divided, highly corrupt, extremely poor country, positioned pivotally between Russia’s western frontier and the EU’s eastern flank. Parts of western Ukraine used to be Poland, and before that part of the Austro-Hungarian empire, whereas the Russian-speaking east and south belonged to Moscow and remain culturally Russian. There is no national consensus on what this country should be.

A native Russian speaker who learned to speak the country’s first language only in his 50s out of political expediency, Yanukovych has long been seen as a man of the old regime, Moscow. The balancing act has been tricky and he has had rough moments with the Kremlin.

But as demonstrated last week, when push comes to shove, Yanukovych is much more comfortable with, and has more to benefit from, the type of politics practised in Moscow ­compared with the systemic reforms that would have flowed from the political association agreement and free-trade regime with the EU that he ditched in Vilnius.

"This is a revolutionary situation, in a technical sense," said Andrew Wilson, Ukraine expert at the European Council on Foreign Relations. "His natural instincts are to attack."

It may turn out to be harder to unseat Yanukovych than it was in the Orange Revolution of 2004-5. He himself ignited that revolt by trying to steal an election. He lost, giving way to Viktor Yushchenko, who proved to be an ineffectual president embroiled in endless intrigues with the then prime minister and fellow revolutionary, Yulia Tymoshenko.

Yanukovych made a comeback, replacing Tymoshenko as prime minister. He then beat her to the presidency in 2010. A year later, she was in jail.

Unlike in 2004, however, outside observers gave the 2010 contest a clean bill of health.

In the middle of his five-year term, Yanukovych is clearly in trouble.

The question is, how much? Can he weather the protests, grind the demonstrators down, rely on his secret police and security forces, on some of the most powerful oligarchs in the country who bankroll him and control much of the media? Can he depend on Vladimir Putin in Moscow to shore him up? Can he secure the loans needed to forestall Ukraine going broke?

In 2004, the security forces split between the revolution and the old regime.

Yanukovych has already lost several MPs and his chief of staff, Serhiy Lyovochkin, has defected. Together with the energy oligarch and one of Ukraine’s richest men, Dmytro Firtash, Lyovochkin controls Ukraine’s biggest TV station. Firtash is also believed to "own" up to 10 MPs who could tip the balance in bringing down the government, if not the president.

If you are a Ukrainian right now, according to the powerful government chiefs, you are either with us or against us.

In 2004, the Orange Revolution achieved critical mass and toppled the ancien regimé. The Kremlin studied the events closely and learned its lessons. Orange is a term of abuse, conjuring up fear and ridicule in Putin’s Moscow. A street victory in Kiev will be a defeat for the Kremlin.

"The key pressure point is the Parliament," said Wilson, anticipating an attempt to muster a vote of no confidence and bring down the government. "That would leave Yanukovych dangerously isolated. Russia has very destructive, coercive powers. They won’t work in the long term."

But in the short term, it raises the stakes in Ukraine. Russia’s interest in preserving the status quo makes the situation more dangerous, perhaps increasing Yanukovych’s chances of survival. – © Guardian News & Media 2013

A warder at a correctional facility has tested positive for Covid-19, sparking concerns about the effects of the pandemic on the whole system
Read more
Advertisting
Continue to the category
Coronavirus