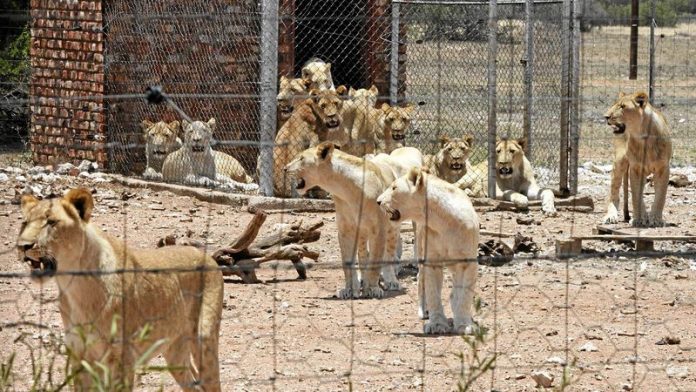 Botswana's minister of agriculture, Christian de Graaff, is under fire after he exported a large shipment of lions to a canned hunting outfit in South Africa last month.

De Graaff sent 22 lions to the Makhulu Game Farm near Boshof in the Free State. Employees at the facility, owned by Henk Vorster, openly discuss how the lions are hunted and their skeletons sold to Asian buyers. Some are bred for sale to international zoos.

At the game farm, a popular local tourist venue about 80km from Kimberley, 18 young lions were crammed together in a small quarantine enclosure of about 30m by 30m this week. With no shade and only a tiny corrugated iron-roofed hut to protect them, they were panting furiously in the blazing heat.

Other camps hold fewer lions – full-maned males and white lions. The excrement is cleaned only every two weeks, according to staff, and the stench from this and the carcasses of the donkeys fed to the lions is overwhelming. Many of the young lions are hand-reared and respond to calls from staff members, who said that until recently, there were 300 of the big cats on the farm. Now there are only about 200, including the 22 exported by De Graaff.

When a lion is sold to a trophy hunter, it is moved into a larger camp across the road and "re-wilded" for at least three months, staff said. Some are sent to other hunting farms, most often near Tosca in North West province.

After the trophy head is taken from the body, the bones are removed and the rest of the carcass is buried, they said. According to figures released by the environmental affairs department last year, the skeletons can fetch up to R80 000 and often end up being ground into potions for fake "tiger wine" or "tiger cakes".

Vorster, who has a spares shop in Hartswater and several other farms in addition to Makhulu, refused to speak to the media about the lions this week. "I am breeding with them [sic], but it is a private business and has nothing to do with you," he said.

According to Werner Böing, the environmental management inspector at the Free State department of economic development, tourism and environmental affairs, Vorster is an "approved predator breeder in our province and his facility is up to standard". Permits have been issued to move the 22 lions from Botswana to the Free State, he said.

Previous deals
De Graaff’s involvement in the breeding and hunting of lions was exposed by Botswana’s Mmegi newspaper in September. An investigation revealed that in 2005, the Botswana department of wildlife and national parks captured and donated two "problem" Kalahari lions, a male and a female, to De Graaff’s company, Phologolo Botswana Safaris.

The lions were kept at his Tautona Lodge in Ghanzi and had multiplied to 32 by the time he sent his shipment to the Free State in November. According to Mmegi, a dispute has arisen between De Graaff and Botswana’s minister of wildlife and tourism, Tshekedi Khama, over whether the lions belong to him or the Botswana government, which has banned trophy hunting.

This is not the first deal De Graaff has done with commercial game farmers in the Free State. In 2011, he was given permits to export 26 lions to a farm called Smal Deel Unissen.

He refused to answer questions from the media about his lion deals.

The Botswana Congress Party Youth League called on the agriculture minister to resign over the deals. "De Graaff should resign, be investigated or be fired," said league president Dithapelo Keorapetse. "[It] doesn’t make sense why a wildlife officer would donate precious government animals to a private citizen. It also doesn't make sense why a government minister would accept a donation of wild animals belonging to the nation."

Revenue, legality
Wild and Free South Africa, a Durban-based wildlife nongovernmental organisation, raised the alarm about the 22 lions exported across the Ramatlabama border in November.

"Botswana recently announced a moratorium on hunting, but in South Africa wildlife farmers cannot get enough stock because, from the time a cub is born until it is hunted or killed to harvest its bones, a lion is worth a pile of money to its owner," said chief ­executive Margot Stewart.

According to figures released by the Professional Hunters’ Association of South Africa in November, registered lion hunts showed the largest increase of any species from 2011 to 2012, from 445 to 596 lions. Revenue generated increased from R77-million in 2011 to R122-million in 2012, at an average fee of R203 000 per lion.

Department of environmental affairs and tourism spokesperson Albi Modise said Vorster's importing of the lions is legal in terms of national and international biodiversity regulations.

The department is in the process of developing a biodiversity management plan that may prohibit lions and leopards from wild populations being introduced into captive breeding facilities, he said.

It is legal to sell and export the bones of hunted lions, Modise said, provided the necessary permits have been issued. – oxpeckers.org

Is education the answer to shifting attitudes towards homosexuality in Botswana?