A ride on the ghost bus 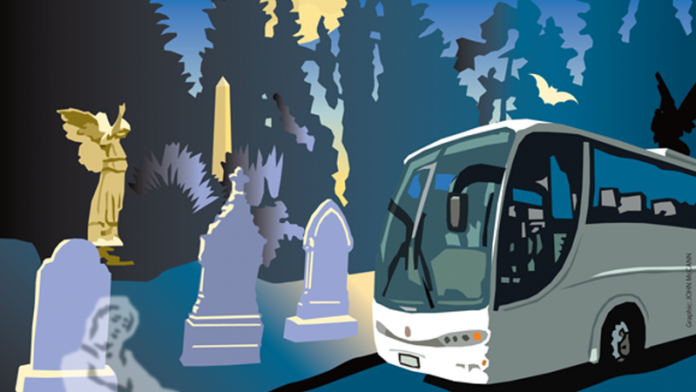 Standing in Braamfontein cemetery, ankle deep in dead leaves … What are we doing here? There is a cool wind and the little patches of torchlight only seem to make the place seem darker. Our two 48-seater buses are parked beyond the cemetery gates with small card signs saying "Mystery Ghost Bus Tour".

The originator and chief ghost investigator, Mark Rose-Christie, says on his YouTube video: "Just like other ghost tours are not a ‘show', neither is this one. But it's almost like a show and offers more than any other ghost tour in the world. Much more." Hmmm.

There is a wide variety of people on our tour of about 100 – young and old, black and white, rich and poor, though the tickets are not terribly cheap at R299 a pop. There are similar tours all over South Africa – the Pretoria "Spook Bus" and Cape Town, Port Elizabeth and Durban "Mystery Ghost Bus" tours. I can't help but think: Why do people go in for this ghost stuff?

You certainly get your money's worth of ghost stories on this tour, related by our tour guide, Mark Petzer, and in prerecorded audio by Rose-Christie, actors and participants as our tour bus passes the buildings in Parktown North, Braamfontein, Kensington and Troyeville and ends up in the Braamfontein cemetery.

There's the former Transvaal Children's Memorial Hospital, the Old Fort and the Supreme Court – all had links to the notorious murderess Daisy de Melker and are all supposedly haunted by her ghost, which shows itself by banging doors and drawers and appearing as reflections in windows. Damaged cars and smashed windows are ascribed to paranormal activity in the Constitutional Court parking lot, formerly the site of a mortuary, our tour guide tells us.

The Kensington Clinic is allegedly haunted by its founder, Sister Adele and, in Kensington Castle, built by Samuel Wilson for his bride Kate McKirdie in 1911 and which they had to vacate due to lack of funds, the two tried to ward off prospective owners by moaning, clanking chains and being generally scary ghosts – sort of like Beetlejuice, except they weren't dead yet.

The stories appeal to a classic desire for narratives. There are cautionary tales like the "Uniondale Hitchhiker"; tragedies like the one about Chow Kwai Fo – who committed suicide, setting himself on fire, to oppose the pass system; and thwarted romances like the orb – a lover separated from his sweetheart by her overprotective father, near the Devonshire Hotel.

Maybe ghost stories are only meant to remind us that our lives are short and we should make the most of them. Yet somehow this does not entirely explain the enthusiasm as our tour group stumbles through the graveyard taking pictures of the old headstones.

Or the glee, watching Petzer – in silver spectacles and a polystyrene top hat – demonstrate how to dowse for spirits by holding two pieces of "boppa" wire, feeling them converge because of "energy fields".

An interesting explanation of our interest in ghost stories can be found in Sigmund Freud's "death drive" theory. He proposed that an instinct exists in all of us to revert to an inanimate state, which is achieved by dying. This state represents the ultimate safety zone – no daddies to steal our mommies away, no penises to envy. It might be said that ghost stories bring us close to experiencing death without having to experience it ourselves.

This isn't to say that ghost stories are the only medium on the tour. There are also EVPs – electronic voice phenomenons – which are played on the bus as we drive between locations. They are recordings of alleged paranormal activity and sound like white noise, bumping and creepy voices. These, we are told, are made at places that are haunted and the ghostly voices can sometimes only be heard when the recordings are amplified and played back.

They make me think of the 2007 movie Paranormal Activity. But the EVPs, although somewhat decontextualised, played on a full bus as we drive through Jo'burg, are nowhere near as scary as the sounds in the movie.

The film is in the "found footage" style, à la the 1999 Blair Witch Project, purporting to be the videotapes that a couple have taken to document their haunted and eventual gruesome demise. Originally developed as an independent film, it was picked up by studios and went on to become a phenomenon, earning $108-million at the United States box office and $194-million worldwide – proving again the mass appeal of the supernatural.

But it was a photograph circulated by our tour guides allegedly showing a ghost that left me cold. It was taken by the Supernatural Paranormal Investigation Team of South Africa, the local experts in the otherworldly, in an underground tunnel at the old Post Office in Rissik Street. But someone on our tour said that it looked not so much like a ghostly presence as a fart.

The tour in general – interesting as a historical tour, albeit a bit long at five hours – lacks a certain sophistication that leaves it about as scary as a Tales from the Crypt rerun from the late 1980s.

At the end of the evening, we are summoned into a circle in the cold, pitch-dark cemetery, carpeted in dead leaves. Petzer calls on us to remember the Blair Witch Project, which takes place in a dark, wooded area, not unlike the one we are standing in. "Imagination," he said, "is the most powerful tool when it comes to experiencing the supernatural."

There is a pregnant pause and then a figure emerges from the trees with a skull mask lit up by a torch – another one of the tour guides. The blonde woman next to me sighs loudly, annoyed.

As viewers, we are always evolving but our interest in death and the supernatural seems as keen as it ever was, a fact borne out by the success of those scary movies.

Freud wrote in The Uncanny in 1919: "There is scarcely any other matter, however, upon which our thoughts and feelings have changed so little since the very earliest times, and in which discarded forms have been so completely preserved under a thin disguise, as our relation to death."

Although sceptical about the parlour-room theatrics of the tour, I won't lie: I was one of the first people out of the graveyard and back on the bus.