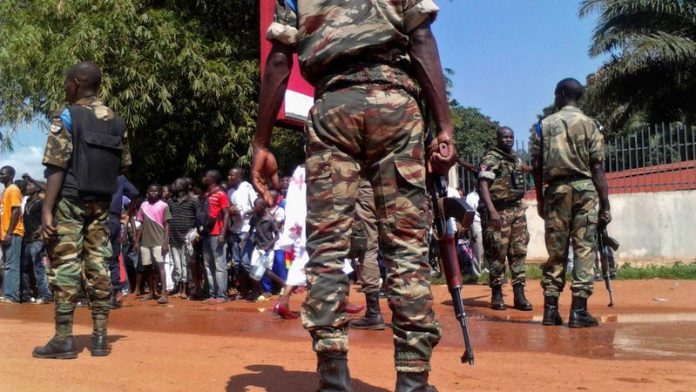 French troops received a triumphant welcome as they deployed in strife-torn Central African Republic on Saturday, with thousands cheering their arrival as part of a bid to stamp out deadly sectarian violence.

French President Francois Hollande said reinforcements to a UN-mandated force would reach 1 600 troops – 400 more than previously envisaged – by Saturday evening and had been told to "disarm all the militias and armed groups terrorising the population".

Sectarian violence between Muslim and Christian communities, that has swept the nation since a March coup, has left at least 300 dead in a wave of massacres and reprisal attacks since Thursday, the Red Cross said.

French troops patrolled the capital in a visible show of strength on Saturday and a fighter jet flew low over the city, where bodies still lay abandoned outside the parliament building.

Red Cross staff continue to pick up dead and mutilated bodies from the streets, but have been overwhelmed by the scale of the task.

Around 200 French troops crossed the border from Cameroon into the mainly Christian town of Bouar in the west of the country, where cheering residents honked horns, danced and banged on saucepans to welcome them.

'Atrocities and massacres'
"Save us. We have suffered so much," shouted Cedric (15) in Bouar, one of France's main military bases in Africa and a nerve centre for the area that saw some of the worst violence at the height of the Seleka rebellion.

Local builder Serge Dilamo said: "There are deaths, they are killing us. Everyone knows someone who was killed."

Hollande told the end of a summit with African leaders in Paris that the French troops would be deployed wherever civilians were in danger.

"I believe we can quickly put a stop to the current atrocities and massacres," Hollande added, describing the latest wave of violence as "terrifying".

In the longer term, Hollande said the goal was to "re-establish stability and, when the time is right, organise free and democratic elections".

Sporadic gunfire
Life in the city began to regain some normality on Saturday, with traders reopening their stalls under colourful umbrellas and residents venturing out to check on relatives.

"Some activity has resumed. Women stallholders are on the streets making fritters and porridge," one Bangui inhabitant said.

"It is reassuring to see the French," said Bangui petrol seller Adolphe. "We are waiting for the liberation of Central Africans."

Residents contacted by telephone saying only sporadic gunfire was heard on Friday night, in stark contrast to the intense violence of the two previous nights.

An order by President Michel Djotodia for all armed groups except international forces to return to their barracks went largely unheeded, although locals said there appeared to be fewer armed men on the streets.

The presidency also called on all civil servants, media personnel and traders to go back to work, saying in a statement that "African and French forces will assure the protection of all".

The latest violence appeared to vindicate recent warnings from France, the United States and others that the Central African Republic (CAR) was on the brink of collapse with tensions soaring between its Christian and Muslim communities.

They installed their own chief, Djotodia, as president – the first Muslim leader of the majority Christian country.

Hollande ordered the launch of operation "Sangaris" – named after a local butterfly – on Thursday after winning a UN Security Council mandate to send a peacekeeping force to the country.

The French troops will help to shore up MISCA, a 2 500-strong African force, which is already on the ground but has been unable to stem the country's descent into chaos.

The UN resolution gives the French-backed African force a 12-month mandate and the right to use "all necessary measures" to restore order.

Quell violence
However, UN leader Ban Ki-moon has warned that up to 9 000 troops could be needed to quell violence that has spread through the country of 4.6-million.

"There is an urgent need to avoid further deterioration of the situation," Ban said, praising France for being prepared to act in its former colony. – AFP