Myth in maize patch made real 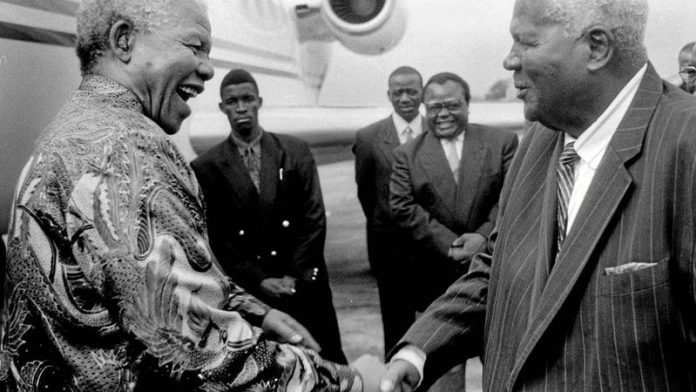 'S'khokhele Nkomo, s'khokhele Nkomo! S'khokhele Mandela, s'khokele Lorryhlahla!" (Lead us Nkomo, lead us! Lead us Mandela, lead us Rolihlahla!), we sang at the top of our squeaky voices. Up and down the maize field he made us march, brandishing our little hoes for Kalashnikovs.

Our commander was my eldest brother Jabu, and he did not tolerate slackers. No raspberry drink or piece of bread for lazy "gorillas", which is how we pronounced guerrillas. This was the early 1970s in our village in the then Selukwe District of Rhodesia. My young siblings and I had no idea who Joshua Nkomo or Nelson Mandela were, but they sounded and felt extremely important to big brother and our mum.

After the umpteenth denial of my favourite drink, I just had to ask: "But who is this Mandela? Isn't Nkomo what we call our cattle?"

The shock on Jabu's face was indescribable. How could I not know? These two men were going to free us. Free all of us black people.

"From what?" My junior primary school-going self was not bound by anything.

His arm swept across the entire universe in front of us. I nodded my not-so-small head. That sounded simple enough. If anyone could liberate me from hoeing maize, carrying firewood each Thursday and fetching water from the brook too early in the morning in June, then that was all right. Nkomo and Mandela peered at me every day from Jabu's little notebook. They had to be kept hidden in case the police or our father discovered them. Father did not like any talk of politics in our family.

Forward to the early 1980s. I was now in secondary school. The name Nkomo had become synonymous with political "dissidents", bad losers who wanted to prevent the rest of Zimbabwe from enjoying its independence. Jabu had already given up asking Nkomo to lead us anywhere and was focusing on his football career instead.

It was said that Nkomo was not the one who had led our armed struggle for independence and freed us Zimbabweans, but the other one. I had never heard of this other one in the 1970s. We certainly didn't sing about him in mummy's maize patch.

Mandela was still around, though, this time in colour! There was his smiley face, with the trademark dharakishon (hair parting), on his head. I learned he was in prison. Suffering to free the people of South Africa. A few dozen of them were in my class at the University of Zimbabwe. They told me their stories. Sechaba's father had been killed in prison, Linda's mum beaten to death after a demonstration, Hlubi's brother believed kidnapped and/or killed by the police.

I read the news and books, and watched television shows about Mandela and the other freedom fighters. This time, I could toyi-toyi with meaning, not just because I was afraid of missing out on raspberry juice. We marched in solidarity with the youth of South Africa on June 16. Mandela's birthday was a key feature on my calendar. On Africa Day, we held vigils in Africa Unity Square in Harare. On October 7 1988, I almost lost a limb pushing and shoving to get into the stadium for a human rights concert held to call for an end to apartheid. Bruce Springsteen, Tracy Chapman, Sting, Peter Gabriel and Youssou N'Dour performed.

I read every speech and watched every bit of footage of Mandela's wife, Winnie. I liked her wigs, which looked exactly like my mum's. She spoke fearlessly. Beautifully. Sometimes I forgot about Mandela; Winnie represented him.

Zimbabweans closely followed the story of Mandela and apartheid, not just out of neighbourly curiosity. Zimbabwe supported the anti-apartheid movement, provided arms and gave refuge to ANC members. Just as others had done for us. As a result, there were several fatal bombings in Harare in the late 1980s by South Africa's apartheid government.

Mandela no longer felt as remote to me as he had back in my childhood. At last, I began to appreciate what my brother had tried to teach me all those years ago. I rooted for Mandela and his people to achieve what we had in 1980. He was going to lead "us" to freedom. The south was no longer another country.

He was released from prison on February 11 1990, a day before my 25th birthday. There he was, just as I had imagined him, his face still as kind as I remembered. Winnie was at his side, in that wig! I did no work that day, or the few days after that. I was free too.

Fast-forward to the 21st century. Nkomo has been dead since 1999, removed from this Earth and largely airbrushed from history. And now Mandela is gone.

Each time I saw him and the other freedom struggle leaders of his generation on television, I thought of my dad, who is now in his 80s. I wanted to rush and give them their bedroom slippers, a nice dressing gown and a warm cup of cocoa. I am sure Mandela got that when he retired, unlike Nkomo, who worked until he dropped, and others who don't seem as though they are ready for that cocoa yet.

I wish I had had the chance to sit on a cushion at Mandela's feet and ask him: The Queen or Mrs Thatcher? What was with that haircut? Boxing – seriously, man? Did you miss Winnie? Otis Redding or Don Williams? Tambo or Sisulu, and don't give me the political speak: which one did you really like? It would be just an ordinary conversation with an ordinary man who had extraordinary experiences.

I think of Mandela, Nkomo and other men of their generation as reminders of where we have come from. I celebrate them, their often forgotten wives and their children.

Mandela gracefully handed over the reins to the next generation and stepped away from public life over a decade ago, yet he will remain in my memory and consciousness forever. He gave me, a black Zimbabwean and African woman, something to hold on to, to believe in.

I will speak of him in this way to my granddaughters when they grow up; casting him not as a man with mythical or saintly qualities but a mere mortal like the rest of us. And I'm sure they won't raise a quizzical eyebrow and ask: "Are you sure, Gogo? Did he really do all those things, or are you exaggerating?"

I was freed from carrying firewood and fetching water from miles away and, thankfully, from toyi-toying on that barren maize patch! Thirty and some years later, the blood still rushes through my head each time I watch old footage of "gorillas" singing liberation songs. I get goose bumps when they sing "Sikhokele Nkomo! Sikhokele Rolihlahla!" When I sing it now, it's still "Lorryhlala", deliberately, for a good giggle. I doubt Mandela would mind.

Everjoice J Win is a Zimbabwean feminist and writer

10 things about the Free Mandela Campaign

1 Nelson Mandela had been in jail for 20 years when ANC leader Oliver Tambo decided, in 1982, to relaunch the campaign to highlight the continued imprisonment of ANC leaders in South Africa, with Mandela as its central figure.

2 The original World Campaign for the Release of South African Political Prisoners was started at the time of the Rivonia Trial but was banned by the apartheid government. It limped on outside South Africa.

3 An account of the campaign by ES Reddy, first published in 1988 and republished on the ANC's website, notes that in 1971 activist "Mewalal Ramgobin initiated a Committee for Clemency in South Africa and was elected its national chairman", but later that year "was served with banning orders … to prevent him from continuing the campaign".

4 In 1980, writes Reddy, the Sunday Post and its then editor, Percy Qoboza, launched a "Free Mandela" campaign. The paper was closed down soon after and Qoboza was restricted. "Its news editor, Zwelakhe Sisulu, was served with severe banning orders and then detained for many months."

5 The campaign was relaunched in South Africa at the time of the foundation of the United Democratic Front.

6 Guardian blogger Dorian Lynskey writes: "Although it is almost inconceivable now, at the dawn of the 1980s Mandela's name was not widely known outside South Africa. By the time he was released from prison a decade later, his name, face and story were synonymous with the anti-apartheid struggle and pop music played a major role in that transformation."

7 In particular, the song Nelson Mandela (or, in the United States, Free Nelson Mandela) by The Special AKA popularised the campaign.

8 The Specials' Jerry Dammers wrote the song after learning about the Mandela campaign in 1983 at rallies organised by British anti-apartheid groups to celebrate his 65th birthday. Members of other groups such as The Beat joined in the recording, which was produced by Elvis Costello. As Lynskey says, it helped a great deal that the song was upbeat and very catchy.

9 In 1988, to celebrate Mandela's 70th birthday and raise awareness about his imprisonment, a huge concert was organised by producer Tony Hollingsworth at Wembley Arena in London. The cream of British pop artists appeared alongside South Africans such as Hugh Masekela and Miriam Makeba. The event, which lasted 11 hours, was broadcast to 600-million people worldwide. The BBC, which screened the concert, was censured by 24 Conservative Party MPs in the British Parliament for supporting the "terrorist" ANC.

10 Two years later, in April 1990, many of the same stars would play a concert at the same venue to welcome a free Nelson Mandela, who attended with his then wife, Winnie.

But in the battle of John and Mbali, the way things are going, the party will crucify the better option
Read more
Africa

Ahead of planned protests, Cameroon’s main opposition leader argues that change is more urgent than ever
Read more
Advertising
Continue to the category
Politics