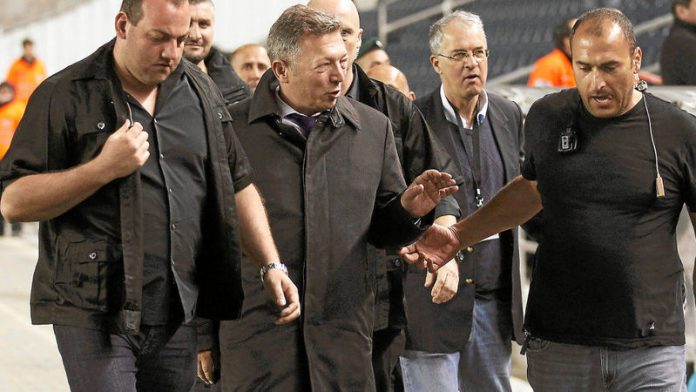 Angolan human rights lawyers have expressed “acute ­disappointment” over the Swiss ­authorities’ release of an arrested Russian-Israeli arms dealer who they say is central to the ­“Angolagate” scam.

The massive scam, which took advantage off of a debt repayment deal between Angola and Russia, resulted in the siphoning off of up to $1-billion from the Angolan fiscus, $36-million of which allegedly went to President Jose Eduardo dos Santos.

The Swiss authorities arrested Arcadi Gaydamak in Zurich on November 19, saying, curiously, that they were holding him over a dispute between him and a member of his Israeli football team. They released him last week, saying that the parties had reached ­financial agreement.

Gaydamak has been on the run since 2009, when a French court sentenced him to six years in jail in relation to Angolagate, but he failed to serve his sentence. The jail term has since been reduced to three years.

It is unclear whether the French police were preparing to seek his extradition when he was freed last week. His current whereabouts are not known, but since his conviction he is thought to have confined his movements to Switzerland, Russia, Portugal and Angola.

The human rights lawyers represent three prominent Angolan human rights and anti-corruption activists – David Mendes, Franciso Tunga and Ernesto Guilherme – who in April laid a criminal complaint with the Swiss federal authorities against Gaydamak and others allegedly involved in Angolagate.

They claim that Gaydamak colluded in a criminal syndicate with controversial French businessman Pierre Falcone, Angolan politicians and officials including Dos Santos, and a Russian oligarch and MP to commit bribery, money laundering and “abuse of trust” in connection with the repayment of Angolan ­sovereign debt to Russia.

It is alleged that Switzerland’s UBS Bank and major commodity and oil trader Glencore were also involved.

Questions over Swiss determination
Hopes were raised that the criminal case might have acquired new impetus when the Swiss federal ­prosecutors confirmed in October that they had opened an investigation into the allegations.

However, the release of Gaydamak has prompted questions about the Swiss determination to pursue the matter. In a statement, one of the lawyers, Francois Membrez, said that, according to the information received, “there was no effort [by the Swiss] to interview Mr Gaydamak about the Angola-related allegations. I am baffled as to how serious ­investigators could have thrown away the opportunity to question [him] in detail. They appear to have abdicated their responsibility.”

The lawyers laid their complaint with the federal Swiss authorities after a cantonal court in Geneva controversially freed up Gaydamak’s Swiss assets, which had been frozen.

According to London-based anti-graft organisation, Corruption Watch, the cantonal magistrate failed to note in his judgement that the main witness for Gaydamak was paid by his lawyers to testify and based his testimony entirely on information they had supplied him.

Corruption Watch, founded by former ANC MP Andrew Feinstein, said that the failure to interrogate Gaydamak was “particularly troubling, coming on the heels of a successful campaign by the Angolan government against Portugal that shut down corruption investigations against two senior Angolan leaders, Vice-President Manuel Domingos Vicente and General Francisco Higino Lopes Carneiro”.

A spokesperson for the Swiss federal prosecutor‘s office, Henri della Casa, told amaBhungane that Gaydamak was arrested following a complaint laid in 2010 by former football player and coach Luis Fernandez in connection with litigation over €400 000.

“The parties, however, found a financial agreement, and based on that, the public prosecutor’s office had no more reason to demand the extension of Mr Gaydamak’s ­detention,” he said.

Questions were also sent to the public ministry of the Swiss confederation, but no answer had been received at the time of going to print.

No services for "profit"
​Angolagate has its roots in Soviet-era debts of $5-billion run up by the Angolan government in the purchase of Russian arms during the Angolan civil war. The debt was reduced by agreement to $1.5-billion, to be repaid by 2016.

A report by Corruption Watch and Angolan legal nongovernmental organisation Maos Livres alleges that, for unclear reasons, the Russians engaged Abalone Investments, an Isle of Man-based company controlled by Gaydamak and Falcone, to service the deal.

The report alleges that, although the company further reduced the debt to $750-million, Angola paid Abalone the full $1.5-billion to write off the debt, with the extra funds siphoned off to various corrupt beneficiaries.

It charges that Abalone provided no service to justify its $750-million “profit” and that the deal could have been done directly between Russia and Angola.

Of the money paid to Abalone, Corruption Watch alleges that $311-million, or about 22%, went to Gaydamak and Falcone; about $36-million to President dos Santos; about $38-million to four other senior Angolan officials; and $48-million to the Russian oligarch. About $500-million is unaccounted for.

UBS said it was not the subject of investigation leading to government action, and it regarded the matter as closed. Glencore denied any wrongdoing, saying that it had arranged prefinancing facilities for Angolan company Sonangol and lifted crude oil under standard offtake arrangements in accordance with ­“applicable laws and regulations”.

Corruption Watch estimated that, if Angola had paid the funds directly to Russia, it would have saved up to $1.029-billion, more that 13% of its gross domestic product in 1996.

Richard Young has argued at the arms deal commission that the tender process employed was illogical and illegitimate.
Read more
National

Chippy unlikely to get a shakedown at arms deal commission

The former chief of acquisitions for the South African National Defence Force denies having a hand in dodgy deals and influencing tender awards.
Read more
National

Hennie Van Vuuren, author and key critic of the arms deal, has declined to take the oath or give evidence at the arms procurement commission.
Read more
National

A group of organisations calling for the Sereti inquiry's disbanding said a commission statement labelling them 'foot soldiers' was racist.
Read more
Advertising