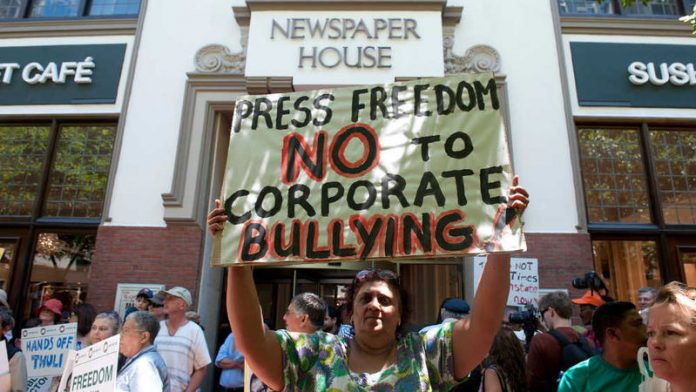 It was supposed to be a silent demonstration to call for the reinstatement of axed Cape Times editor Alide Dasnois, but it descended into chaos as supporters of the Independent group's new owner, Iqbal Survé,? gate-crashed the protest, bringing along a group of minstrels with a full brass band.

Police intervened after about 30 minutes of shouting between the two groups, and instructed the gate-crashers to leave, which they did peacefully.

About 500 people protested outside Newspaper House in St George's Mall in the Cape Town central business district on Tuesday. Newspaper House is home to four commercial papers, one of them the Cape Times, and about 15 community newspapers. Among the protesters calling for Dasnois's reinstatement were Cape Times, Cape Argus and Weekend Argus journalists.

The Right2Know campaign organised the picket to protest against Dasnois's dismissal on December 6 and the alleged threats to sue her and a staff member. But before the midday picket began, a group called the Movement for Transformation of the Media in South Africa (MTMSA) called an urgent media briefing and announced it was going to counter the Right2Know demonstration.

Convener of the movement, Wesley Douglas, said they were countering the R2K picket because it was raising a fallacy in the mind of the public, as the issue of the Dasnois sacking was not about press freedom but transformation.

He also said the group had no links to Survé and that none of its leaders even knew him personally.

"I'm a pastor, I have no business relations with him at all, unless he wants to accept Christ or come to church," said Douglas from a plush penthouse at the Mandela-Rhodes building.

It is made up of various organisations and individuals who are concerned with the slow pace of transformation in the media space, he said.

"One of the key issues we feel is that there's been this push to vilify black business ownership of media houses, which most recently has been done to Sekunjalo and the attack on its chairperson Dr Iqbal Survé.

"We have seen that over the last 20 years, there is no true transformation in the media as the fourth estate," said Douglas.

"We have seen that there's an attack on black politicians, black business people in South African media, and there has been editorial interference even from journalists' point of view in terms of how they are sent to cover different stories."

Douglas said theirs was a wide-ranging campaign that takes in all the challenges faced in the media, including disparity between salaries of black journalists and their white counterparts and media houses having mostly white procurement for goods and services – "real issues which speak to the very core of the industry".

He said Dasnois's "redeployment" and later dismissal had opened a can of worms.

"She wasn't fired, she was moved laterally …," he insisted. "But now that she has been fired for the behaviour she has, this has opened for us a whole can of worms."

More than one issue
Douglas said it was not just an issue of Dasnois being fired, but that she had been replaced by a black editor, Gasant Abarder, and that Sekunjalo has a right to bring about transformation within the media houses it owns.

In a statement also released on Tuesday, the movement said there was a trend among media houses to become initiators and participators of political and social change rather than independent commentators and reporters thereof.

"We have seen a concerted effort by largely white owned and run media houses to discredit black business and political leaders in South Africa while at the same time ignoring the shortcomings of their white compatriots.

"Racially biased and skewed negative reporting is the order of the day and the progressive black business people who dare to come up against the white establishment and take ownership of established media companies have found themselves becoming targets of orchestrated smear campaigns," it said.

Douglas added: "This we've seen not only with Iqbal Survé and Sekunjalo but we've also seen it with the Guptas being targeted by competing media interests. Most media houses in South Africa are white-owned, and run and managed. If they report against own competition, how can they be free and fair."

The movement has threatened to embark on a series of boycotts, demonstrations and actions which will support black ownership of media houses and fight against white media monopolies and cartels.

Boycotts
The organisation said it will launch a range of boycotts, targeting individual publications by naming and shaming them, and publish their transformation and apartheid era records early next year.

"We will also lobby companies and the government to stop placing advertising in these publications and will not stop until true transformation takes place and negative reporting and antiblack reporting is no longer an accepted practice."

The Progressive Professionals Forum, headed by Jimmy Manyi, is one of the organisations that forms part of this movement.

It was represented in the press conference by its deputy president, Kashif Wicomb, and Western Cape chairperson Waheeda Amien.

Amien said freedom of the press could not be seen in isolation of transformation of media.

"It's important to consider the context within the issue of deployment and dismissal of Dasnois and the attacks on Sekunjalo and Survé.

"What Sekunjalo did was to enter a privileged zone that was traditionally reserved almost exclusively for white interests and that, in fact, was the sin the Sekunjalo group committed."

"To speak about transformation of the media is to expose the truth that the media still reflects patterns of ownership, control and distribution reflective of the apartheid past. This is the sad truth.

"Implementing transformation involves trampling on vested interests that profited from the status quo.

"We can no longer shy away from the reality that the so-called independence of the media has been used to camouflage the hidden anti-transformation agenda," said Amien.

It also wants an unconditional withdrawal of all threats to sue Dasnois and reporter Melanie Gosling, and an unconditional reinstatement of Dasnois as the editor of the Cape Times, should she be willing to return to the paper, or alternatively be given a suitable settlement to compensate for all her losses.

They also want SIM, Sekunjalo Holdings, Sekunjalo Investments and Survé to submit a written assurance they would never again sue or threaten to sue any of the group's editors and editorial staff on matters of overwhelming public interest or that involve fair comment.