Forget your GDP, come on get happy 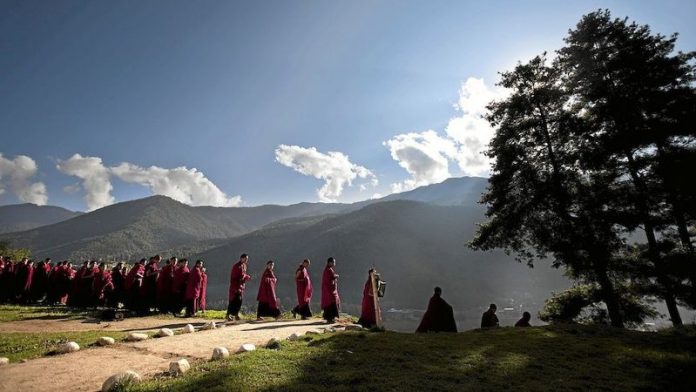 In 1972 Bhutan’s fourth Dragon King, Jigme Singye Wangchuck, ascended to the throne of the tiny Asian country. Sandwiched between China and India, the kingdom could have bowed to either of their competing economic models. But the king avoided the pursuit of growth measured by gross domestic product and chose the attainment of happiness instead.

“Development must serve a purpose. It is not simply to push limitless economic growth,” he said at the time. “It must be human-centred and its objective must be to create those conditions that enable the human to achieve that which is most important to them.”

The idea stems from when Bhutan’s legal code was written in 1729. It said: “If the government cannot create happiness for its people, there is no purpose for the government to exist.”

King Singye established the Gross Happiness Commission and made gross national happiness (GNH) the measure of how his administration was doing. The everyday life of his subjects was broken down into nine overall categories, such as use of time, health, community vitality, good governance, and ecological diversity and resilience. Every three years, a national survey is done of how people feel the country is doing in each of these categories. The scores show how well the government is doing in bringing happiness to the people and what it needs to do to improve.

This is consistent with the Buddhist principles of the country, with spiritual and physical balance being at the core of people’s lives. Bhutan’s new Constitution, adopted when the Singye stepped down in 2006, said: “True abiding happiness cannot exist while others suffer, and comes only from serving others, living in harmony with nature, and realising our innate wisdom and the true and brilliant nature of our own minds.”

With South Africa struggling to translate its past two decades of economic growth into prosperity and happiness for its citizens, a delegation from Bhutan visited the University of the Witwatersrand in early December to share their experiences. Although their country is on average poorer than South Africa, its people are consistently rated as happier.

Sammdu Chetri, from Bhutan’s Gross Happiness Commission, said the current capitalist model of measuring success through GDP growth is not bringing happiness to most people. “[It only] goes to benefit a few,” Chetri told a seminar at the university.

Hard to attain
Development is based on growing wealth, which means most people work for the improvement of the lives of a few. The lack of wealth and opportunities for the majority means that happiness is hard to attain, he said. In Bhutan, all development must first be approved by the happiness commission and can only go ahead if it will make people happier.

The Bhutanese model is aspirational. The United Nations has declared March 20 Happiness Day. It has also created the annual World Happiness Report to see which countries are happy, and why.

It said that the United States’s founding fathers thought it was so important that their Constitution enshrined Americans’ inalienable right to happiness.

South Africa’s own Constitution leads the world in the rights that it enshrines, but it does not guarantee people’s right to happiness. The UN report ranked South Africa as the 96th happiest in the world, or the 60th least happy, of 156 countries. It is sandwiched between the Dominican Republic and Lebanon.

The Scandinavian countries are consistently rated happiest, with Bhutan always sneaking in, despite the huge differences in wealth and living standards. The least happy countries are in Africa – the Central African Republic, Benin and, in last place, Togo.

Chetri said Bhutan’s placing of happiness at the centre of development did not come out of the blue, and could readily be replicated in other countries. “We are not creating anything new. We are working on measures that already exist.”

This was why his country is working with the UN to develop a way to create a similar measurement for other countries, he said. “Your country just needs to want to be happy and it can be done.”

Resource curse
But South Africa has followed a very conventional model of capitalist growth. Professor Patrick Bond, of the University of KwaZulu-Natal’s Centre for Civil Society, said the country was bound to be depressed because it is afflicted by a resource curse. Its economy is based on the extraction of resources at the cost of its people.

“This is the most useful country in Africa, thanks to the platinum group metals. We have the greatest store of wealth and that should reflect in our prosperity,” he said.

But instead of benefiting people, the resources were given to big business, which displaced people to get to the resources. They were then forced to give up their subsistence lifestyle to do minimum-wage and dangerous work to feed their families. This kept people continually on the edge of survival, unable to think about things such as happiness and always concentrating on the next meal, he said.

This means that the entire capitalist system, both here and internationally, fosters angst and constant crisis. It gambles on a new bubble – dot com, housing, carbon trading – which inevitably bursts. Lives are ruined. And it is those with the least who end up bailing out the companies and countries, he said.

The World Bank’s Changing Wealth of Nations report puts it simply: a country has wealth thanks to resources. When these are mined and shipped away for beneficiation in another country, it loses that wealth for minimal return. So every single day South Africa gets poorer in natural capital and, per capita, every citizen wakes up on New Year’s Day R2 000 worse off.

Professor Jacklyn Cock, from the University of the Witwatersrand, said depression is the inevitable result of running an economy in this way. Depression stems from consumerism, as it “continues a cycle of dissatisfaction”. People spend their lives working to earn money to buy things that are meant to make them happy. But they never have enough because their work brings wealth to the rich and not to them, she said.

Ecosocialism
The global economy must be changed to accommodate the needs of most people and mitigate the impact of climate change. The world should move towards ecosocialism, where resources are collectively owned and democratically managed, she said. Through mass mobilisation and participation, people would then be happier because they would know the country’s resources are benefiting them.

Since 1994, the South African government has followed economic policies that work on the assumption that economic growth will solve poverty, said Lorenzo Fioramonti, from the University of Pretoria. This is the dream of trickle-down wealth.

“Redistribution has been postponed because we are told the system will take care of everybody,” he said.

All this really means is that most South Africans are struggling to meet their basic needs, and the wealth gap is constantly increasing. Happiness is nigh on impossible to achieve in this environment, he said.

So, while South Africa struggles to uplift its people with a traditional economic model that has the growth of wealth at its core, Bhutan has chosen to answer the question: “What is the purpose of life?”

Its model is working.